I have not found record of Frank Geary, but Frank Gear was born in 1909 and died in 1958 in Wilson County. 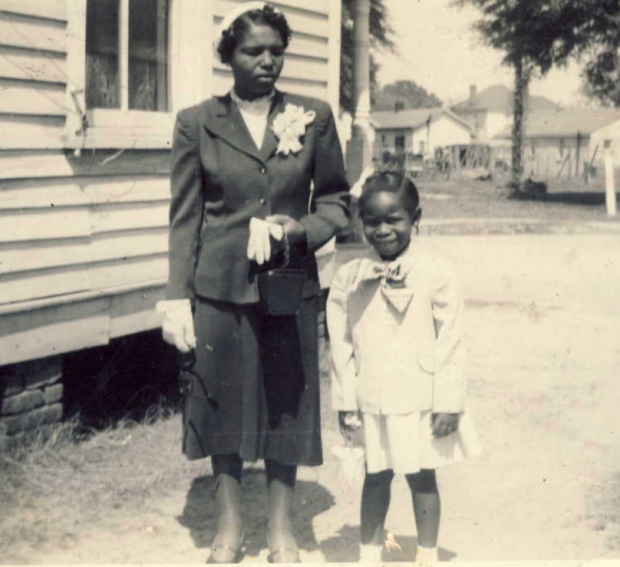 In 1940, James Hardy Buchanan registered for the World War II draft in Wilson. Per his draft card, he was born 25 September 1915 in Rennent, North Carolina; his contact was Mrs. Artelia Buchanan; he resided at 1002 Wainwright Avenue, Wilson; and he worked for R.E, Quinn & Co., Goldsboro Street, Wilson.

It cannot be a coincidence that Henry Rountree, Chaney Spell and Blount Baker were interviewed by W.P.A. workers about their lives as enslaved people. Lillie Edwards Pender died 7 September 1991 in Wilson. Per her death certificate, she was born 12 October 1894 and was a widow.

The seventy-sixth in a series of posts highlighting buildings in East Wilson Historic District, a national historic district located in Wilson, North Carolina. As originally approved, the district encompasses 858 contributing buildings and two contributing structures in a historically African-American section of Wilson. (A significant number have since been lost.) The district was developed between about 1890 to 1940 and includes notable examples of Queen Anne, Bungalow/American Craftsman, and Shotgun-style architecture. It was listed on the National Register of Historic Places in 1988.

A 1905 plat of Pender Street property shows that John Spells (or Spell) owned this lot as early as 1905. The house has been demolished. In the photo above, Ash Street (parallel to Pender) and its elbow intersection with Darden Lane (formerly Darden’s Alley) are visible beyond the vacant lot at 204. The darker green area at left marks the former continuation of Darden Lane to Pender Street. Today, a foot path — just visible below the green house at far left — snakes diagonally to exit into Pender via the former driveway of 208 North Pender, the now-demolished Best house.

In the 1908 Wilson city directory,  Jno. S. Spell appears as a contractor living at 133 Pender Street. (133 was the earlier number of the lot now designated 204 North Pender. Whether the house surveyed for the nomination committee was the same house that earlier stood at 133 is not clear.)

In the 1940 census of Wilson, Wilson County: at 204 Pender Street, odd job laborer J.S. Spell, 74, born in Pitt County, and wife Martha, 65, an invalid born in Oxford. Grocery deliveryman Arthur Darden, 27, and his wife Bettie, 19, rented rooms in the house.

John Stephen Spell died 31 January 1946 at Mercy Hospital in Wilson. Per his death certificate, he resided at 204 Pender Street; was married to Martha Spell, age 61; was 80 years old; was born in Pitt County to Easter Spell; was a carpenter; and was buried in the Masonic cemetery. M.G. Spell was informant.

In May 2018, the Wilson Times published this notice:

WILSON COUNTY BOARD OF COMMISSIONERS

Any person may raise the bid within ten (10) days of this notice. The bid must be raised by at least 10% of the first $1,000 and 5% of the remainder. The raised bid must be delivered to the Clerk to the Board located in the County Manager’s office and must include a 5% bid deposit.

Raised bids will be advertised until no further qualifying upset bids are received. 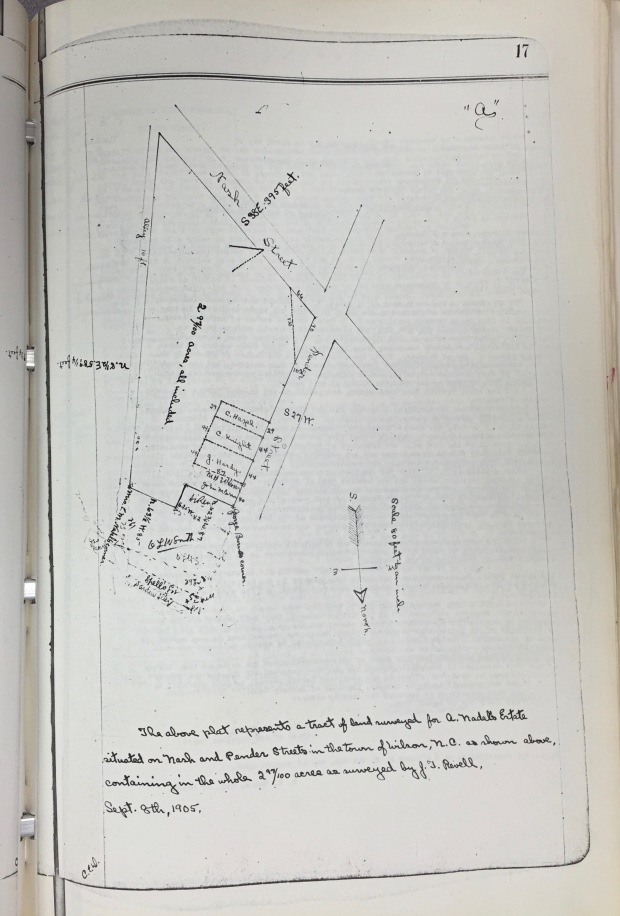 This plat, drawn in September 1905, shows an irregular plot of land near Nash and Pender Streets. Part of the Anthony Nadal estate, the tract measured just under three acres. Wilson’s African-American community had begun to coalesce east of Pender, across from First Baptist Church, Saint John’s A.M.E. Zion and Calvary Presbyterian, and a close look at the plat shows some of Nadal’s neighbors.

“I really doan know who my first marster wus, case I has been sold an’ hired so much since den. I reckin dat I wus borned in New Hanover er Beaufort County an’ I wus sold fust time in my mammy’s arms. We wus sold ter a man in Carteret County and from dar de speculators took me ter Franklin County. I wus sold ter a Mr. McKee an’ dat’s de fust thing dat I ‘members.

“I doan ‘member anything ’bout maw ‘cept dat dey called her Sal an’ dat she died years an’ years ago. I reckin dat I once had a pappy, but I ain’t neber seed him.

“Marster McKee wus mean to us, an’ we ain’t had nothin’ to eat nor wear half of de time. We wus beat fer ever’ little thing. He owned I reckin two er three hundret slaves an’ he had four overseers. De overseers wus mean an’ dey often beat slaves ter death.

“I worked in de house, sometime ’round de table, but I ain’t got so much to eat.

“When word come dat we wus to be sold I wus glad as I could be. Dey tol’ me dat de marster has gambled away his money an’ lost ever’thing but a few slaves. Later I learned dat he had lost me to a Mr. Hartman in Nash County.

“Marse Sid Hartman wus good as he could be, sometimes his overseers wusn’t but when he foun’ it out he let dem go. Marse Sid ain’t got but one weakness an’ dat am pretty yaller gals. He just can’t desist dem at all. Finally Mis’ Mary found it out an’ it pretty near broke her heart. De ole marster, Marster Sid’s daddy, said dat long as he could ride a hoss he could look out fer de plantation so Marse Sid took Mis’ Mary to de mountains.

“Atter de war I married Lugg Spell an’ we had five chilluns. He’s been dead dese many years an’ I’se worked, worked an’ worked to raise de chilluns. I has been on charity a long time now, a long time.” 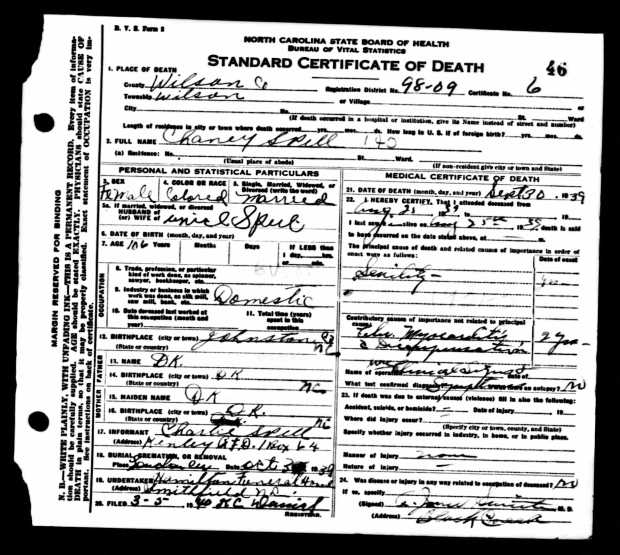