Though Thomas Kerney‘s death certificate describes him as an “old solder,” he appears to have been too young to have served during the Civil War. Nor have I found any military record for him. Thomas and Silvey Kerney are not listed in Wilson County census records.

On 25 April 1864, four Wilson County men — Dennis, Edward, Henry and Jerry Borden — presented themselves in New Bern, North Carolina, to enlist in Company C, 1st Regiment, North Carolina Colored Heavy Artillery of the United States Colored Troops (which was later known as Company C, 14th Regiment, Heavy Artillery). All bore the same surname, which was likely a mishearing of “Bardin” or “Barden,” and may have escaped from the same owner, but they were not brothers.

And a muster record for Dennis Borden:

In 1872, Lydia Borden opened an account with the Freedmen’s Bank branch in New Bern. Per her account card, her husband was “Edward Borden (soldier) — d. of smallpox (1865?)” If this is the same Edward, freedom was short-lived.

Henry Borden was admitted to a military hospital in Hampton, Virginia, in April 1911. He was described as 85 years old; a resident of Bertie County, N.C.; and married to Cora Borden. He died 19 August 1911 in Windsor, Bertie County. 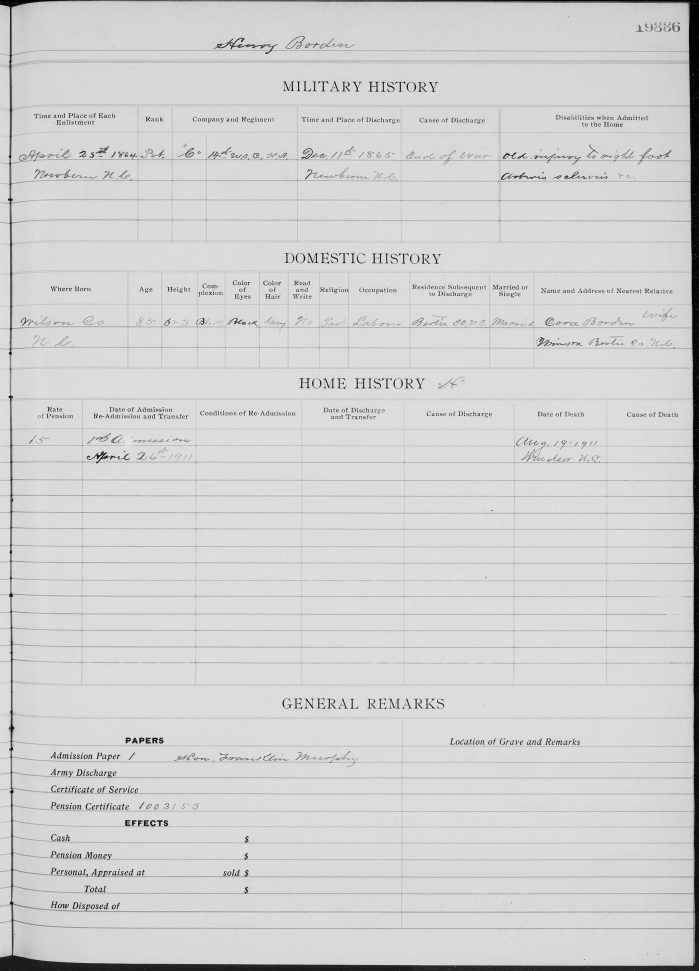 The Henry Ellis Post of the American Legion remains active. 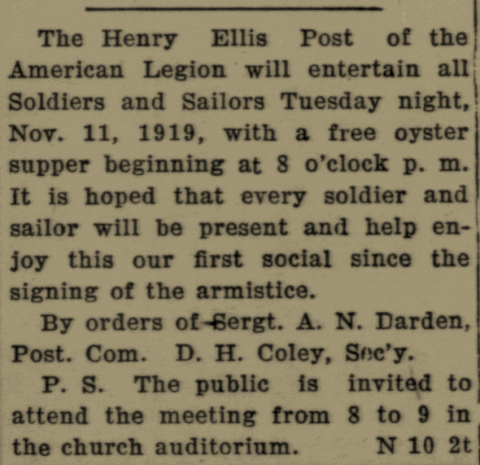 Three months after the Confederacy surrendered, the Goldsboro field office of the Freedmen’s Bureau received this shocking letter from an African-American resident of Wilson. Austin F. Flood poured his anguish and anger into four pages detailing the outrages of authorities against freedmen in the county. Though some of the perpetrators of violence were former Confederates, Flood pointed a steady finger at so-called Union men who also terrorized and abused formerly enslaved men and women.

I take the opportunity of writeing you these few lines because I under stand you to be the head ruler ove this Steate in Millitary act. And this I write to you secretly in feare of my life. For in the present condision we can not helpe our Selves. Because thes people has every advantege of us and they are makeing use of it. The free men are under very good beheaveior here; And yet they cant see any peace at all. The rebes is about take the Town because we cant help our Selves Because we are without any thing to Protect us. For they sent the cunstable around to every free man s houses and taken all the wepons they said by General Schorfield. they were com manded to do it. And thuse we gave them up because we thought it was demanded of us by him. And not with Standing I thought at the Same time in a certain [illegible] that he was giveing them

a Stick not only to breake my head But also his even the heads of all the Northren People whom I love as my Self. Yea I say more then love them. Therefore I look to them for protection. Why am I keept from my libberties Because you have never known the cruilties of these People Who says they are Union men when they are not. For am I acquainted with bot Heavenly an National union and it is as much imposible to mix union and secess as it is to mix Oil an Water. Ive been watching them for twenty-eight months and there is but three union principles about the place and that is Wilie Daniel an Lawyer Langston — T.C. Christmond. These are all that I can look opond as Such. And if these officers be Union men Why do they keep all your ordinances conceiled frome us And try so harde to place a Yoke of thiere own opond us when this is not your Militry rules. They receives your commans and make thiere own laws. Taken down the free men an striping them without liefe or licens. Carring them to Jail and Whiping them [illegible] 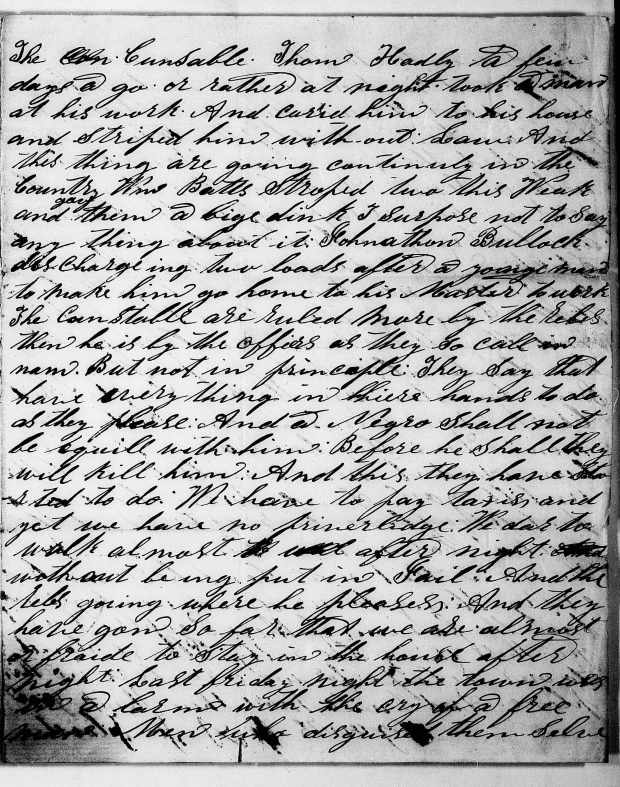 The cunsable Thom Hadly a few days a go or rather at neight took a man at his work And carid him to his house and Striped him with out Law And this thing are going continuely in the Country Wm Batts stroped two this Weak and gave them a bige dink I surpose not to say anything about it. Johnathan Bullock discharging two loads after a yonge man to make him go home to his Master to work. The Cunstable are ruled more by the rebs then he is by the officers as they so call in nam. But not in principle. They say that have every thing in thiere hands to do as they please. And a Negro shall not be equill with him. Before he shall they will kill him. And this they have stated to do. We have to pay taxes and yet we have no priverledge. We dar to walk almost after night without being put in Jail. And the rebs going where he pleases. And they have gon so far that we are almost a fraide to Stay in the house after night Last Friday night the town was in a larm with the cry of a free [illegible] Men who disguised them Selves 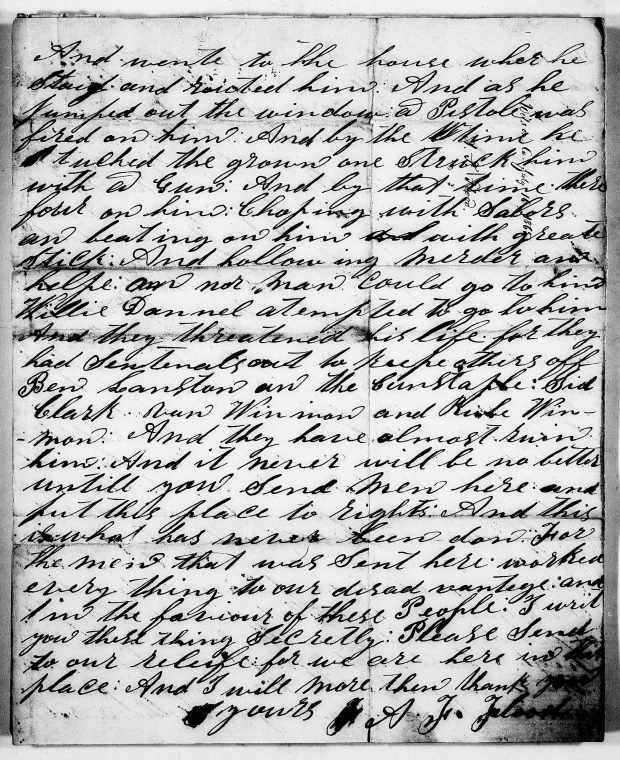 And wente to the house wher he staid and routed him. And as he jumped out the window. A pistol was fired on him. And by the time he tuched the grown one struck him with a gun. And by that time there four on him Choping with sabers an beating on him with greate stick. And hollowing murder an help nor man could go to him. Willie Dannel atempted to go to him And they threatened his life for they had sentenals out to keepe others off. Ben Lanston and the Cunstaple: Sid Clark Van Winman and Rube Winman. And they have almost ruin him. And it never will be no better untill you send men here and put this place to rights. And this is what has never been done. For the men that was sent here worked every thing to our disadvantage and I’m [in] the faviour of these People. I writ you these things secretly. Please send to our releife for we are here in this place And I will more then thank you.  Yours, A.F. Flood

“Billy Rowe’s Note Book” was a regular music column published in the Pittsburgh Courier. In late summer 1943, Edgar T. Rouseau filled in for the vacationing Rowe. Rouseau, with the American Allied Forces “somewhere in the Mediterranean,” shined a spotlight on “sepia bands” whose members were soldiers, including that of the famous Singing Engineers of the all-black 41st Engineer Regiment. 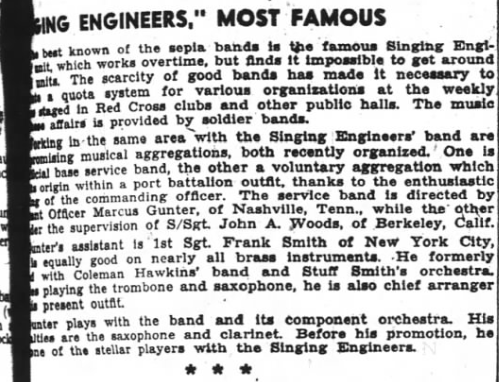 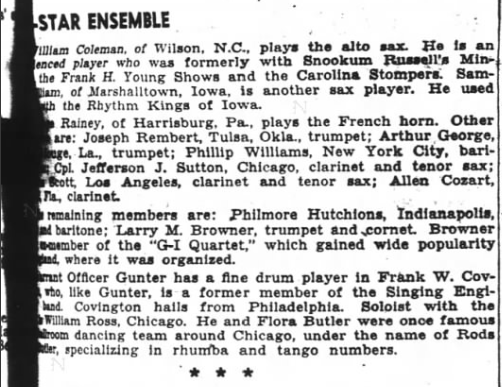 “William Coleman, of Wilson, N.C., plays the alto sax. He is an experienced player who was formerly with Snookum Russell’s Min[illegible], the Frank H. Young Shows and the Carolina Stompers.”

The walls of the narrow entryway into the Wilson County Court House are lined with large bronze plaques commemorating the county’s war dead. Look carefully at the World War I and World War II/Korean Conflict plaques. The areas containing veterans’ names are lighter than the surrounding surfaces; the names are picked out in a shinier paint. Why?

The names are embossed on plates secured to the plaques at each corner by small rosettes disguising bolts. These plates are replacements. The originals contained segregated lists. In other words, “colored” men “who gave the last full measure of devotion” were listed separately from their white counterparts. 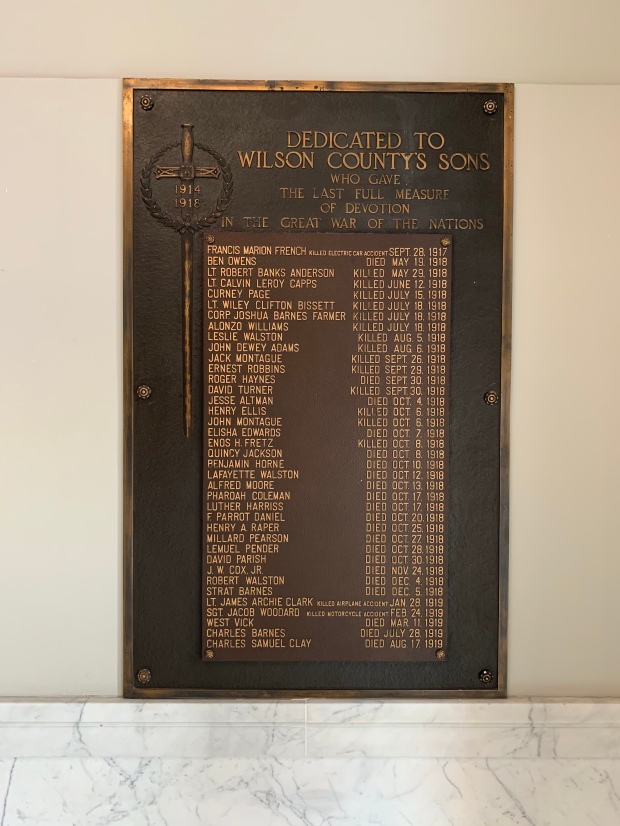 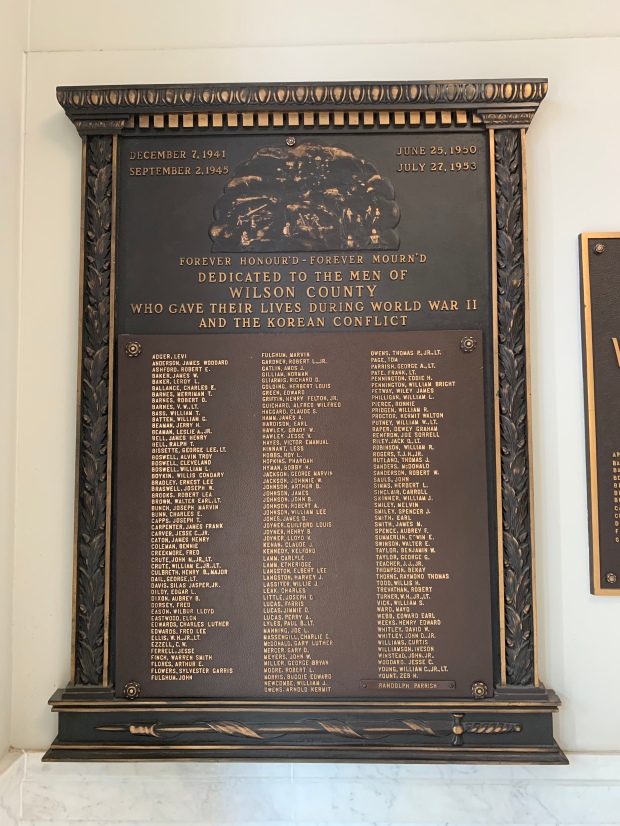 A 10 April 1976 Wilson Daily Times article about the installation of a Vietnam vets plaque reveals photographs of the original plaques for the earlier wars: 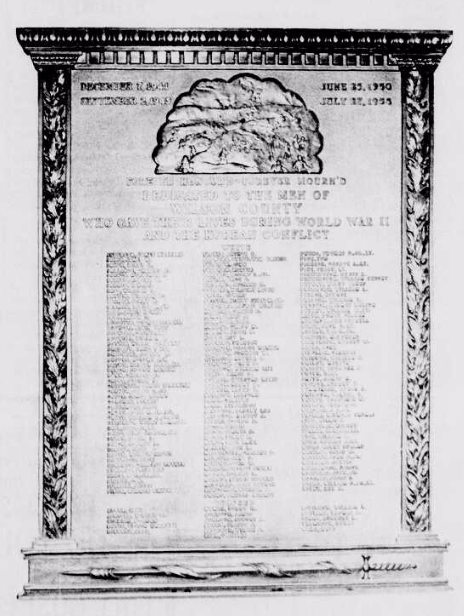 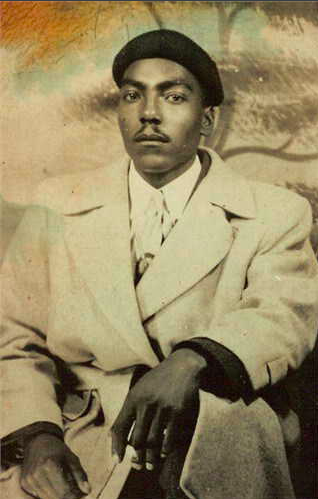 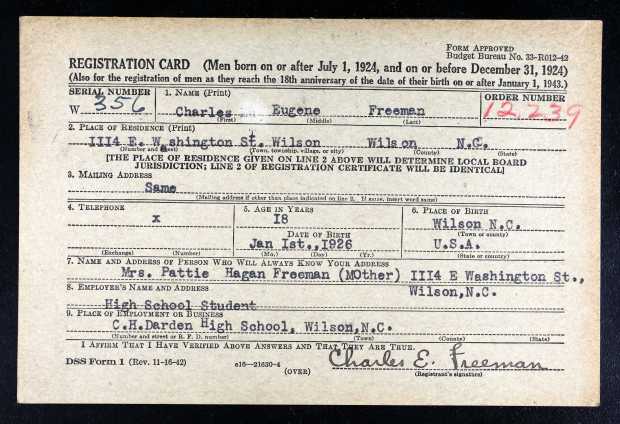 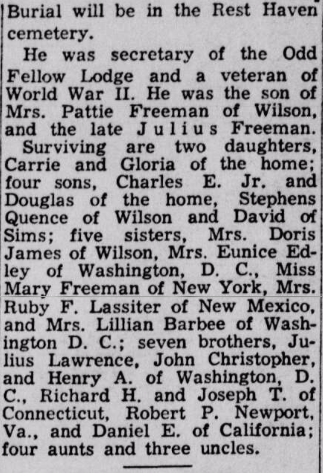 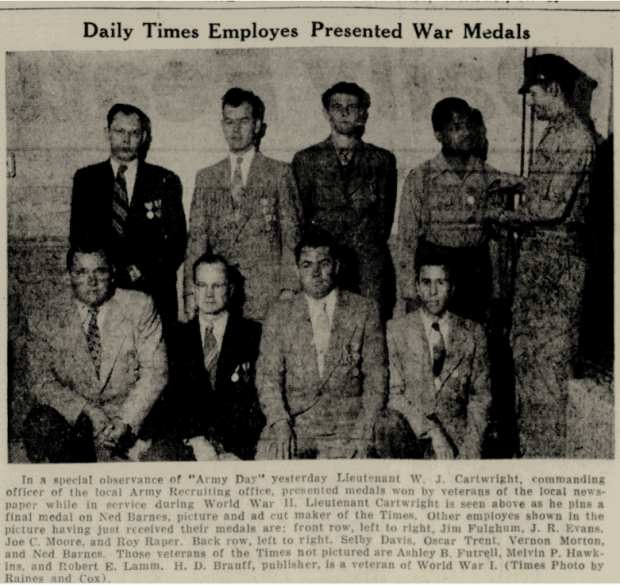 Ned Radcliff Barnes was one of the Daily Times employees who received his war medals on Army Day.

In the early 1940s, Randall Roland James Jr., grandson of Charles H. and Dinah Scarborough Darden, supplemented his duties as an undertaker in the family business with gigs as a federal censustaker and registrar for Local Draft Board 1. (James’ uncle, Arthur N. Darden, had been appointed an enumerator for the 1920 census.)

Reverse side of the registration card of Luther Jones, Wilson, N.C., signed by James as registrar on 16 February 1942.

In 1940, Randall Roland James registered for the World War II in Wilson County. Per his registration card, he was born 10 June 1916 In Wilson; resided at 111 Pender Street; his contact was wife Ruth Vashti James; and he worked for C.H. Darden & Sons, 608 East Nash.