No slave dwellings are known to remain standing in Wilson County. However, just south of the line down in Johnston County, there is this:

The Boyette slave dwelling was built at an indeterminate time in the early 1800s by George Boyette or his son Larkin G. Boyette, who jointly reported eight slaves in the 1850 census. As described in a nomination form submitted to the National Register of Historic Places, the house is a “small, one room log dwelling built of hewn and pit sawn planks held together by full dovetail notches and dowels” with a “stick and mud chimney set at the western gable end.” Once exceedingly common in the antebellum eastern North Carolina landscape, the highly flammable wooden chimneys were generally replaced with stone or brick structures in all but the poorest dwellings — including slave houses. The shelter provided for enslaved people in Wilson County would have been very similar.

Please click the link to the nomination form for details on the construction of this unique remnant of African-American history.

Here is a fuller — and more lurid — account of the Bill Grimes incident:

As set out in Lowcountry Digital History Initiative’s on-line educator resource material, on November 10, 1868, in an article entitled “Spirit of the Southern Democracy,” the Cincinnati Daily Gazette ran an unattributed excerpt from a letter :

“A gentleman writing from Edgecombe county, North Carolina, to a friend in Philadelphia, on the 28th ult., says: ‘Cases are frequently reported to me of physicians refusing to attend the sick, because their relatives were Republicans, or expressed their intention to vote for Grant and Colfax. One man came into my office and told me that his little boy died on Monday for want of medical aid. No physician in the part of the country where he lived would attend the boy, because he was a Radical; one store keeper kept him from eight o’clock in the morning until two o’clock in the afternoon, and would not sell him any thing, because he persistently said he would vote for Grant. One man asked me to send for a Northern physician, because the faculty of the country would not attend his wife, and she was at the point of death. Did I tell you about the affair in Wilson county, a few weeks ago? The authorities, all rebels, and equal to Ku-Klux, arrested a colored man named Grimes, on the charge of burning a barn, but Grimes proved himself to any reasonable and unprejudiced mind perfectly innocent. But he is the leader of the Union League, and they wanted to rake him up, as he had made a severe speech against them and in favor of the Radicals the day before. A delegation of colored men came for me twenty miles. I went.

“‘I asked for a hearing for Grimes in my presence. It was not granted. I offered to bail him. This offer was rejected. A rebel drew his revolver on me in the court house, behind my back. Some one more prudent stopped his shooting. I left, telling them I would have Grimes out, and the next morning they released him to prevent my having the gratification of doing it, so I was told. Grimes wouldn’t promise them to vote for Seymour and Blair, but the next day he raised a company and went to the Raleigh Convention.'”

The gentleman from Edgecombe County was not identified.

Who comprised the delegation of colored men?

Former New York governor Horace Seymour was the Democratic nominee for President in 1868. He lost to Ulysses S. Grant. Francis P. Blair of Missouri, Seymour’s vice-presidential candidate, gained notoriety for stump speeches in which he cast pro-Reconstruction Republicans as a “a semi-barbarous race of blacks who are worshipers of fetishes and poligamists” and wanted to “subject the white women to their unbridled lust.”

The “Raleigh Convention” was the state nominating convention.

Between 1908 and 1912, Booker T. Washington embarked upon a series of “educational pilgrimages” across several Southern states. In the fall of 1910, Washington and a phalanx of businessmen and A.M.E. Zion clergymen set off on an arc across North Carolina, making speeches and setting examples in Charlotte, Concord, Salisbury, High Point, Winston-Salem, Greensboro, Reidsville, Durham, Wilson, Rocky Mount, New Bern, and Wilmington.

The response to the announcement of Washington’s tour was positive, but not without fine points made. The Times cited an opinion piece by the Greensboro press, noting approvingly that “foremost living negro” or not, white men should not be put to the task of receiving him into their cities. There were “plenty of public spirited colored people available for that.”

Along those lines, the Times assured white Wilsonians that “special arrangements” had been made for them as “a great many seem to want to hear” Washington.

On a practical note, black veterinarian Elijah L. Reid, recently returned from a residency of sorts at Washington’s Tuskegee Institute, seized the occasion to take out a large ad in the paper touting an endorsement by the Wizard himself.

A commemorative poster and ticket from the event are here. By all accounts, the Wilson stop was a great success. Washington rubbed elbows with Sam Vick and other local heavy-hitters, including all three of the town’s black doctors and several of its most accomplished building tradesmen. The visit happily coincided with the ground-breaking for a new First Baptist church, and Washington laid its cornerstone. The next day, as Washington’s special Pullman car rolled out of town, Raleigh’s News & Observer ran a pleasant piece emphasizing the gaiety of the occasion.

In its next publication, the Times — with a gracious nod to “ex Congressman F.A. Woodard” — also commented favorably upon the evening’s events and published excerpts from Washington’s speech.

The photo below was apparently taken early in the day before the main event. The instantly recognizable Booker T. Washington is seated center, surrounded by his all-star retinue of traveling companions and Wilson’s African-American luminaries. Below the image, more about these men. (Wilson residents, as usual, are in bold text.)

The photo that ran several days later in the New York Age seems to show only the Visiting V.I.P. contingent.

For a brief description of Washington’s Wilson visit embedded in a detailed account of his entire North Carolina tour, see David H. Jackson’s Booker T. Washington and the Struggle Against White Supremacy (2008).

Many thanks to Representative G.K. Butterfield, D-N.C., who provided the numbered photograph and a key listing the names of the men depicted. That key was the basis of the expanded list above.

A few days ago a negro Woman refused to obey an order I gave her about cooking some Tomatoes. I ordered her again. She very violently refused to obey. The land lady was absent at the time. After a lapse of two hours She returned I told that I intended to give her a good whipping if she did not Cook them. The negro was standing out a few feet from the door and commenced giving me some “slack jaw” where upon I gave her a good beating by kicks and knocks.

Being a stranger to you and to your mode of proceeding and learning that you had jurisdiction in this County I address you this letter, becoming informer against myself and holding myself amenable to your order whenever called upon or to the civil authorities I care not which. So there is but one to whom I must answer for the offense if I have committed any.

It is my opinion that you had better come up as you can by Enquiry find many who condemn the act, Justify the negro and blame me for the Course I pursued. While I have never been raised to take a taunt from a white man and can certainly never become so loyal as to take it from a negro, while I honest profess to be as loyal as any Extremist in this Country I was an Original Cessession. I have been whipped in a Contest of Arms, after the surrender of Genl Lee I accepted the situation as it was. I took an oath of allegiance to the United States Government by that I have abided. You will please write me if you wish me to appear at Goldsboro and if you wish any reference you can apply to J.J. Baker, C.A.W. Barham, Dr. Wm. H. Thompson, Dr. J.W. Davis of Goldsboro & J.J. Lutts Esqr. of this place.  Let me hear  from you soon.              Very respectfully, R.G. Barham M.D. 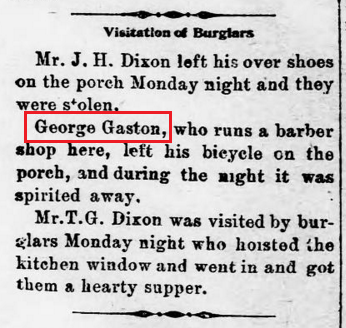 Three weeks apart, the short-lived Elm City Elevator ran two short pieces featuring George A. Gaston. One is straightforward and factual. The second, purportedly authored by Gaston himself, is condescending and replete with stereotypes.

In the 1880 census of Town of Toisnot, Wilson County: George Gaston, 23, barber, is listed by himself.

In the 1930 census of Elm City town, Toisnot township, next door to Dewey Gaston, 30, barber, and family, barbershop proprietor George Gaston, 72, and daughter Ada, a teacher, 43.

Dear, sir your dispatch just come to hand last night after dark, the post master sais it never reached hear until saturday last. Jourdin Artis took a contract of digin 26,000 bushels of marl sometime last summer & comenced but did not threw out half the quantity he engage to throw out & become in debt & quit the Job & has now called on me for asettement yet neither I have not Sean him since about that time I should of gone to your office to day but I am so very busy in my farm. I am wating to hear from you & do as you advise.           Yrs Verry, Respectfully.  Calvin Bone

Forty year-old white farmer Calvin Bone headed a household in the 1860 census of Black Creek township, Wilson County. (He also appeared in the slave schedule as the owner of one black woman, aged 36.) There were two Jordan Artises listed in censuses of communities near Black Creek in 1860: (1) in the census of Buck Swamp township, Wayne County, 30 year-old Jordan Artis is listed in the household of his parents Vinson and Clarky Artis, (2) in the census of Saulston township, Wayne County, 27 year-old Jordan Artis in the household of his mother Olive Artis.

“Marl” is a loose or crumbling earthy deposit (as of sand, silt, or clay) that contains a substantial amount of calcium carbonate, i.e. lime. It was commonly used a fertilizer. 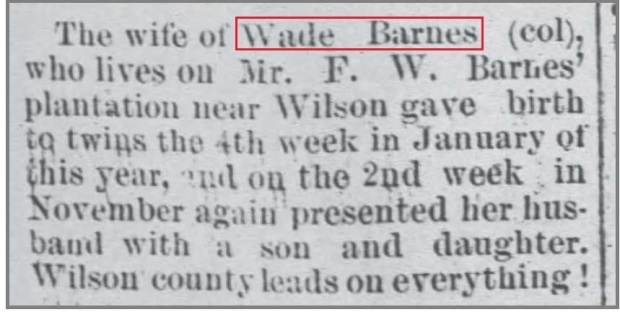 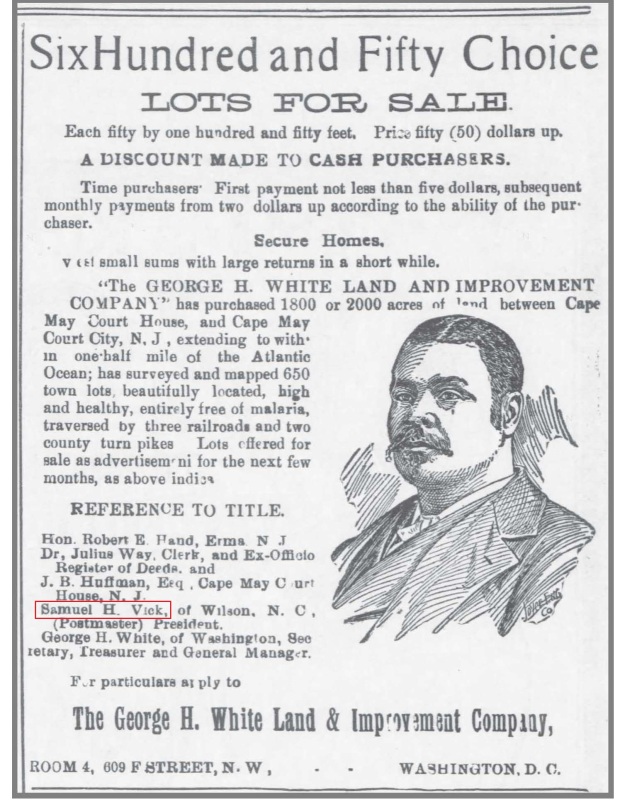 Whitesboro, New Jersey, was founded about 1901 by the Equitable Industrial Association, whose prominent black American investors included poet Paul Laurence Dunbar, educator Booker T. Washington, Wilson educator and businessman Samuel H. Vick, and George Henry White, the leading investor and the town’s namesake. White, an attorney, had moved to Philadelphia after serving as the last black Republican congressman representing North Carolina’s 2nd congressional district. His realty company, advertised above, sold the land on which Whitesboro was developed to E.I.A. White and his fellow entrepreneurs wanted to create a self-reliant community for blacks, free from the discrimination they faced the southern states. Shares in the planned community were sold to African Americans from North and South Carolina and Virginia.