Wherefore petitioner humbly asks your Honor that you will by order command the said Thomas White to appear before you at some early day to be named by your Honor to show cause why the articles of indenture above specified should not be cancelled. 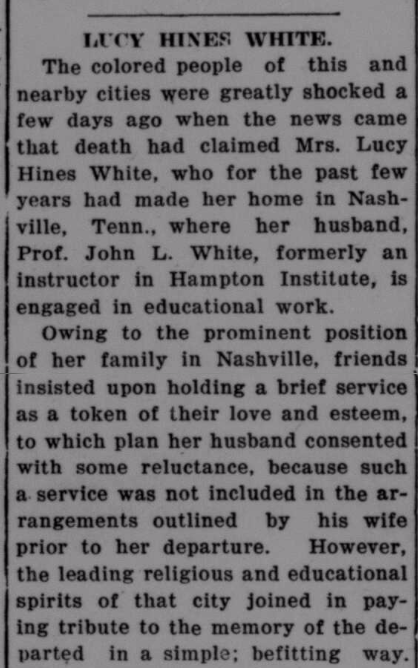 In the 1900 census of Wilson, Wilson County: hotel porter Dave Barnes, 40; wife Della, 40; and children Walter, 24; William, 15; Lucy, 13; Dave, 5; and Viola, 11. [Though all the children were listed as Barneses, the oldest three were in fact Della’s children and were named Hines. Viola was Dave’s child with his first wife, Pattie Battle.]

In 1918, John Leonard White registered for the World War I draft in Nashville, Tennessee. Per his registration card, he was born 26 May 1885; worked as the director of the Department of Agriculture of A.&I. State Normal School [now Tennessee State University]; and Lucile P. White was his nearest relative.

Lucile Pearl White died 19 February 1920 at Hubbard Hospital in Nashville, Tennessee, of a bowel obstruction following an operation. Per her death certificate, she was born 7 December 1885 in North Carolina. J.L. White, 1710 Jefferson Street, was informant, and she was removed to Wilson, N.C., for burial.

Rev. Charles H.C. White briefly served as pastor of Calvary Presbyterian Church and is depicted in its centennial anniversary booklet. 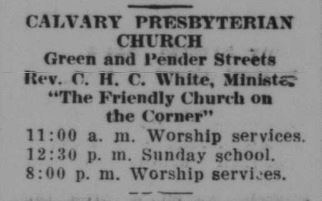 Cockrell’s Grocery, at the corner of Green and Pettigrew Streets one block east of the railroad, served a largely African-American clientele. The building at 404 East Green now houses Saint Mary’s Love and Faith church, a Holiness congregation. Billy Strayhorn and Swindell McDonald, despite their length of service, were teenagers at the time this article was printed. I cannot identify William White with certainty.

On Monday, 16 January 1899, Marion Greely Ward shot Turner Battle inside D.G. Liles’ bar in downtown Wilson. Ward, who was white, ran a little restaurant at the rear of Liles’ saloon, and Battle cooked for him. The News & Observer of Raleigh ran the story first. The angle taken by Josephus Daniels’ paper is not surprising. Battle is “large,” “powerful” and “impudent,” and Ward was a “weak, small man” who had fired him for “bad conduct.”

The Wilson Advance ran coverage in its early edition the next day. The recited facts are choppy, but seem to indicate that Ward owed Battle money and, when Battle asked for it, Ward accused him of an overnight theft of whiskey. When Battle denied it, Ward called him a damned lie and, when Battle returned the insult, Ward pulled a pistol and shot three times. Two bullets hit Battle in the chest.

By the evening post, Battle, who “seemed to be a quiet kind of negro,” was dead.

Contrary to the News & Observer, Ward initially fled, but after a brief turn as a fugitive, he turned himself in. The trial was held quickly, and more facts (or, in any case, testimony) emerged. In summary: on Friday, 13 January, Ward opened his restaurant in Liles’ bar and on Saturday hired Battle to cook. Over the weekend, Ward complained to Liles that Battle had stolen from him, and he intended to discharge him on Monday. When Battle arrived Monday morning, Ward fired him. Kinchen Liles testified that he heard someone say “goddamn” and, before he could hustle out of the refrigerator and around the bar, three shots rang out. John White, “a negro of unsavory reputation,” testified that Ward told Battle that before he could pay him for Saturday’s work, Battle needed to bring back the stolen goods. Battle: “I did not steal your stuff.” Ward: “You’re a damned lie.” Battle: “You’re another.” Ward then ran behind the counter, grabbed his gun and shot three times, with White knocking up the pistol on the last shot. Battle staggered out, sat down and was taken home. He was either a “fussy, disagreeable negro, impudent and mouthy” or a “quiet, good one.” Ward, of course, was described as quiet and possessed of an excellent reputation.

To date, I have found no record of the verdict in this trial.

Also, Turner Battle, 26, of the Town of Wilson, son of Isaac and Lovinia Battle, married Sarah Taylor, 18, of the Town of Wilson, daughter of Nellie Taylor, on 18 February 1894. Missionary Baptist minister W.T.H. Woodard performed the ceremony in the presence of C.C. Gaffney, Henry Moore and George McCown. [Note that if this is the same Turner Battle, his killer’s trial was held the week of his first wedding anniversary.]

Doretha White Evans Parker, 100, a resident of Wilson Pines Nursing Center and formerly of 4968 Lake Wilson Rd., Elm City, NC died Sunday [8 April 2012] at Wilson Medical Center. The funeral will be held Saturday at 1:00 pm at William Chapel Baptist Church, 6154 William Chapel Church Rd., Elm City, NC with Rev. Jimmy Parker, pastor, officiating. Interment will follow in William Chapel Cemetery. As a centenerian Mrs. Parker has seen five generations of family. Left to cherish her memory are three children; Joseph Carl “JC” Evans (Alice) of San Antonio, Tx, John Estee Parker (Evelyn) of Greensboro, NC and James Parker of Durham, NC; one brother, Fred White (Thelma) of Durham, NC; 13 grandchildren; several great-grandchildren and many great-great grandchildren and several great-great-great grandchildren, nieces, nephews, other relatives and many friends. Her mantle was passed to her dear nieces, including Evelyn Lindsey Lucas, who was her diligent caregiver. Public viewing will be held on Friday from 2-7 at the funeral home with the family receiving friends there from 7- 8 pm. Family and friends will assemble on Saturday at 12 noon at the home of her niece Eunice Lindsey, 204 S. Railroad Street, Elm City, NC for the procession to the church. Professional and personal services are entrusted to EDWARDS FUNERAL HOME, 805 E. Nash Street, Wilson, NC. Condolences may be directed to edwardscares.com.

Per a Wilson County Birth Index, Doretha White was born in 1912 to Joe T. White and Lula Edwards.

The twenty-fifth in a series of posts highlighting buildings in East Wilson Historic District, a national historic district located in Wilson, North Carolina. As originally approved, the district encompasses 858 contributing buildings and two contributing structures in a historically African-American section of Wilson. (A significant number have since been lost.) The district was developed between about 1890 to 1940 and includes notable examples of Queen Anne, Bungalow/American Craftsman, and Shotgun-style architecture. It was listed on the National Register of Historic Places in 1988.

There is no listing for 106 North Reid in the 1930 census (or earlier); the house presumably was built shortly thereafter. In the 1930 Hill’s city directory of Wilson, there is a George W. White listed at the address. Is this a typographical error? Was George W. Vick actually the resident?  Other records suggest that he did not live in the house until after World War II.

In 1942, George White Vick registered for the World War II draft in Wilson. Per his registration card, he was born 9 June 1903; resided at 1109 1/2 Washington Street; worked for Safety Taxi Company; and his nearest relative was Mrs. S.H. Vick of 622 East Green Street.

[There is a disconnect between the headlines and the article. “Wilson Negroes” fought, and “The Negro Who Did the Shooting Is Now in Jail.” In fact, while Reuben White was certainly African-American, Henry Langley and his father William were not and were not identified as such in the body of the article.]

In the 1900 census of Wilson township, Wilson County: William Langley, 48, headed a household that included his son Henry, 21.