As usual, the 15 January 1924 Wilson Times mined the police blotter to publish titillating filler stories of alleged criminal activity by African-Americans. Here, two black women were arrested and charged with robbing “a Greek” of seventeen dollars. The women had proclaimed innocence, but a search netted $4.30 “concealed in the hair of Naoma.”

Just below this clip, in the same column, another article — whose title and subtitle consumed as many column inches as the body of the piece — detailed the heavy penalty Mayor Silas R. Lucas imposed upon Norman Roberson for nearly running over a police officer and then cursing the officer out. And then, bizarrely, a paragraph setting out the follow-up to the charge above: “Mamie Roberson and Naomi Bryant, two negro women, charged with robbing Mike Greek were found not guilty and dismissed.” 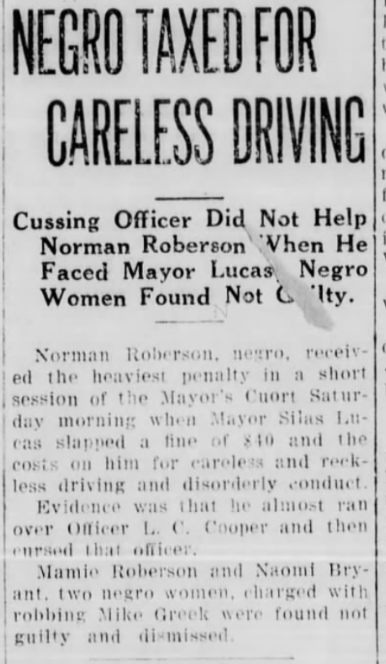 Several of the founders of Indianapolis’ North Carolina Club were natives of Wilson:

Willis Bryant was among the scores of African Americans who left Wilson County for Indianapolis, Indiana, in the last quarter of the 19th century. 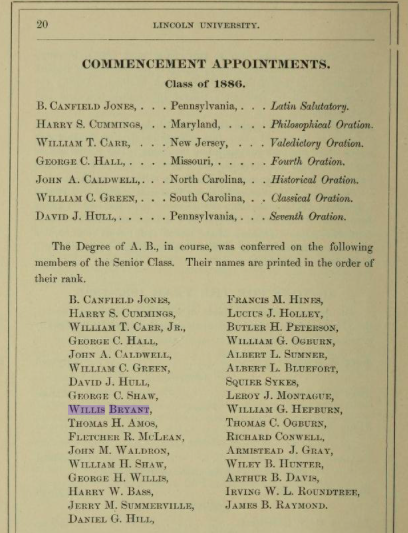 As were many Lincoln alumni, Bryant was very active in the Presbyterian church and helped found Senate Avenue Presbyterian Church.

Fifteen years after he graduated, Bryant and his wife returned to Pennsylvania to attend a Lincoln graduation, then made a round of East Coast cities.

In October 1904, the Indiana Recorder reprinted “His Trip West,” an article by Harry S. Cummings originally posted in the Afro-American Ledger. In the chronicle of his tour of Indiana cities, Cummings mentioned Wilson native Dr. Joseph H. Ward and Willis Bryant and his father-in-law Charles A. Webb’s transportation and hauling businesses.

In 1907, Willis Bryant and other black businessmen formed a committee to assist the city’s Juvenile Court with finding employment for “delinquent colored boys and girls.”

His widow, Ida Webb Bryant, outlived him by decades, and was featured in this 1963 Indianapolis Recorder piece. 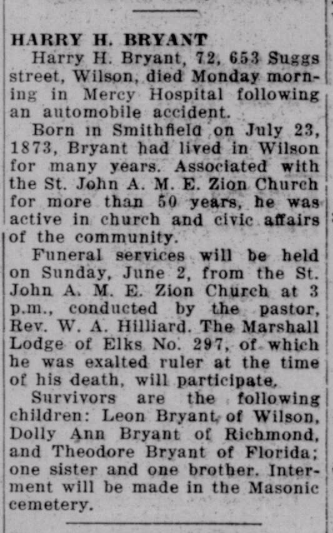 Harry Bryant, 21, of Wilson, son of Nestus and Ann Bryant, married Julia Suggs, 20, of Wilson, daughter of Washington and Easter Suggs, on 26 September 1895 at the Methodist church, Wilson. Richard Renfrow applied for the license, and Presbyterian minister L.J. Melton performed the ceremony in the presence of Mattie Harris, L.A. Moore and Lovet Freeman.

In 1918, Harry Haywood Bryant registered for the World War I draft in Wilson. Per his draft registration card, he was born 23 January 1873; lived at 132 Sugg Street; was married to Julia Bryant; and worked as a carpenter for Boyle-Robertson Company in Newport News, Virginia.

In the 1920 census of Wilson, Wilson County: on Suggs Street, Harry Bryant, 44, carpenter for construction company, and wife Julia, 41.

Julia Bryant died 27 January 1929 in Wilson. Per her death certificate, she was born 23 September 1874 in Wilson to Washington Sugg and Easter Best of Greene County; was married to Harry Bryant; and resided at 618 Sugg Street.

Harry Bryant died 26 May 1946 at Mercy Hospital, Wilson. Per his death certificate, he was born 23 July 1873 in Smithfield, North Carolina, to Nestus Bryant and Annie Bryant of Johnston County; he resided at 653 Suggs Street, Wilson; he was the widower of Julia Bryant; he had worked as a laborer; and he was buried in the Masonic cemetery. Leon Suggs was informant.

And, again in 1942, prayers for white people (though “a few colored contributed.”) 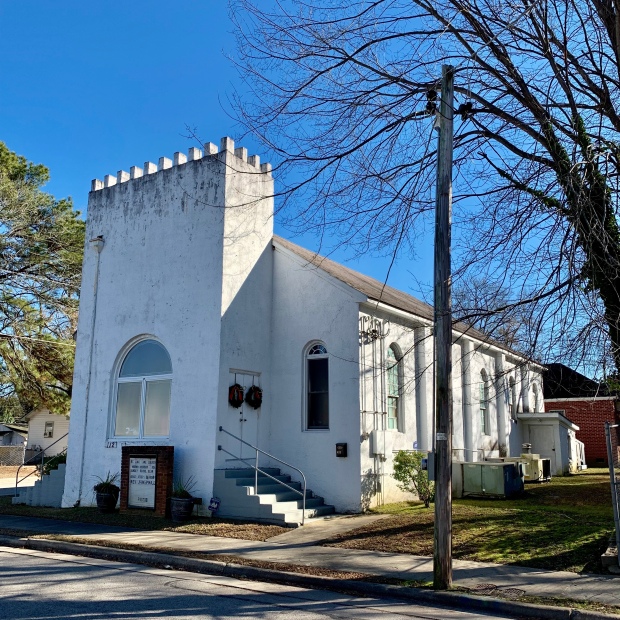 The eighty-first in a series of posts highlighting buildings in East Wilson Historic District, a national historic district located in Wilson, North Carolina. As originally approved, the district encompasses 858 contributing buildings and two contributing structures in a historically African-American section of Wilson. (A significant number have since been lost.) The district was developed between about 1890 to 1940 and includes notable examples of Queen Anne, Bungalow/American Craftsman, and Shotgun-style architecture. It was listed on the National Register of Historic Places in 1988.

As described in the nomination form for the East Wilson Historic District, this house is: “ca. 1930; 1 1/2 stories; gambrel-front house with two-bay facade; aluminum-sided.”

In 1940, Frederick Reid registered for the World War II draft in Wilson. Per his death certificate, he was born 8 September 1905 in Wilson; resided at 1012 Atlantic; his contact was mother Nancy Bryant, 1012 Atlantic; and he worked for W.B. Corbett, Waterworks Road, Wilson.

Nancy Bryant died 14 January 1945 at her home at 1012 Atlantic Street. Per her death certificate, she was 53 years old; born in Wayne County to Zion and Eliza Reid; and was married to Rev. Mathew B. Bryant, age 56, who was informant.

The fifty-first in a series of posts highlighting buildings in East Wilson Historic District, a national historic district located in Wilson, North Carolina. As originally approved, the district encompasses 858 contributing buildings and two contributing structures in a historically African-American section of Wilson. (A significant number have since been lost.) The district was developed between about 1890 to 1940 and includes notable examples of Queen Anne, Bungalow/American Craftsman, and Shotgun-style architecture. It was listed on the National Register of Historic Places in 1988.

As described in the nomination form for the East Wilson Historic District: “ca. 1913; 2 stories; Charlie Thomas house; triple-A I house with bracketed porch posts; Thomas was a printer.”

Robert C. Bainbridge and Kate Ohno’s Wilson, North Carolina: Historic Buildings Survey, originally published by the City of Wilson in 1980 and updated and republished in 2010 under the auspices of the Wilson County Genealogical Society, provides additional details about the house: “Charlie Thomas House. This handsome turn of the century house, a classic of a type, boasts a central cross gable with a diamond-shaped louver typical of this period of construction. The three bay facade is enriched by the porch which boasts sawnwork brackets and turned columns.”

In 1917, Clarence C. Dawson, husband of Elizabeth Thomas Dawson (and son of A.D. and Lucy Hill Dawson), registered for the World War I draft in Wilson. He listed his home address as 616 East Green Street and noted that he worked as a cashier for William Hines (who owned a barber shop and was his nearby neighbor.)

Lizzie Dawson died 16 Janaury 1937 in Wilson. Per her death certificate, she was born 10 July 1894 in Wilson to Charly Thomas of Nash County and Sarah Best of Wilson, and was married to Clarence Dawson. Informant was Charly Thomas.

Charles Thomas died 22 August 1945 at his home at 619 East Green Street, Wilson. Per his death certificate, he was a widower; was 86 years old; was born in Wilson County to Sarah Thomas; was a retired printer; and was buried in Rountree cemetery. Lewis Thomas, 715 East Green Street, was informant. 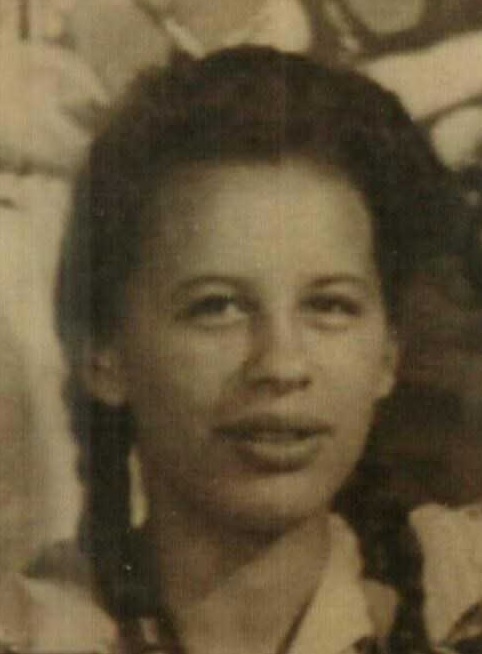 Mrs. Bertha H. Carroll, age 102, of Spring Hill, Florida and formerly of Wilson, NC, died Monday, October 16, 2017. Funeral services will be held on Monday, October 23, 2017 at 1:00 p.m. at Tabernacle Temple of Jesus Christ, Inc., 1601 Lane Street in Wilson, NC with Bishop Staccato Powell officiating. Burial will follow in the Rest Haven Cemetery. Public viewing will be on Sunday, October 22, 2017 from 2-7 pm at Edwards Funeral Home Chapel and the wake will be from 5-7 pm. The family will assemble at 12:00 noon on Monday at her residence for the processional to the church. Direct condolences to edwardscares.com. Professional and personal services are entrusted to Edwards Funeral Home, Inc., 805 Nash Street East in Wilson, NC.

Adapted from the funeral program:

Quietly and peacefully on Monday morning, October 16, 2017 at home in Spring Hill, Florida, Mrs. Bertha Bryant Hawkins Carroll transitioned from this earthly life into eternity with our Lord and Savior, Jesus Christ.

She was born in Wilson, North Carolina and was the middle daughter of Isham and Rossie Underwood Bryant. In this community, Bertha received her formal educational and Christian values. She graduated from Wilson Colored High School, now known as Charles H. Darden High School in 1933. Bertha continued with her formal education by attending and graduating from Livingstone College, Salisbury, North Carolina with a degree in Education. Following college she moved to Brooklyn, New York and worked as a social worker for the City of New York. Social work was her passion and her life’s work, and in 1960, she continued this passion when she returned to Wilson, she retired from the Wilson County Department of Social Services.

Upon returning home, Bertha united with St. John AME Zion Church where she remained a devoted member until she moved to Spring Hill, Florida with her son and daughter in-law. At St. John, she was the Church Clerk for over thirty years and well as the writer of the church resolutions.

Bertha was a loving and devoted wife to Dewitt Hawkins and to this union two sons were born, and she lovingly reared a step-daughter. After the death of Dewitt, she later married Daniel Carroll, who was a prominent business man in Wilson and lovingly raised another step-daughter.

Bertha Bryant married Dewitt Hawkins on 8 September 1942 in New York City. Hawkins died 21 October 1956. Per a Report on Interment, he served in 3294 QM Svc. Co. QMC from 1942 to 1945 as a private first class and was buried in Long Island National Cemetery. His next of kin was Bertha Hawkins, 183-48 Dunlop Avenue, Saint Albans, New York — “Widow Bertha to be buried in the same grave.”

Daniel Carroll died 27 November 1990 in Wilson. Per his death certificate, he was born 15 April 1905 in Henderson, Vance County, to Daniel Carroll Sr. and Lina Coppedge; owned a billiard parlor; resided at 715 Elvie Street; and was married to Bertha Bryant. 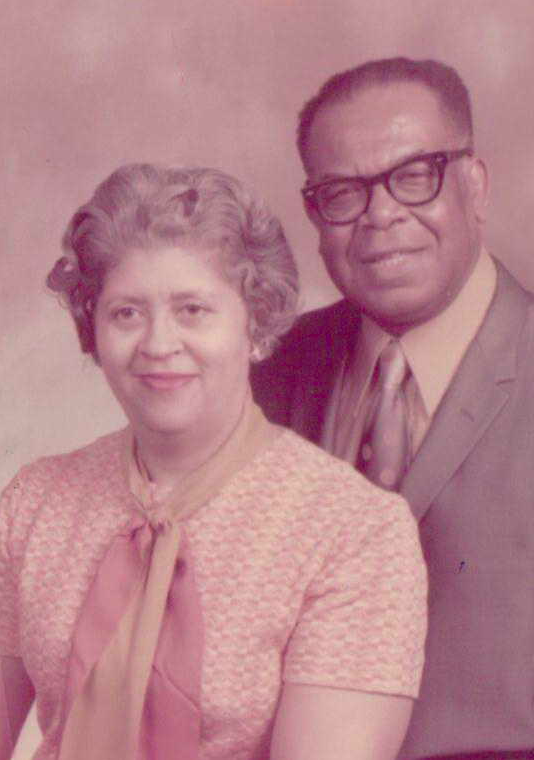 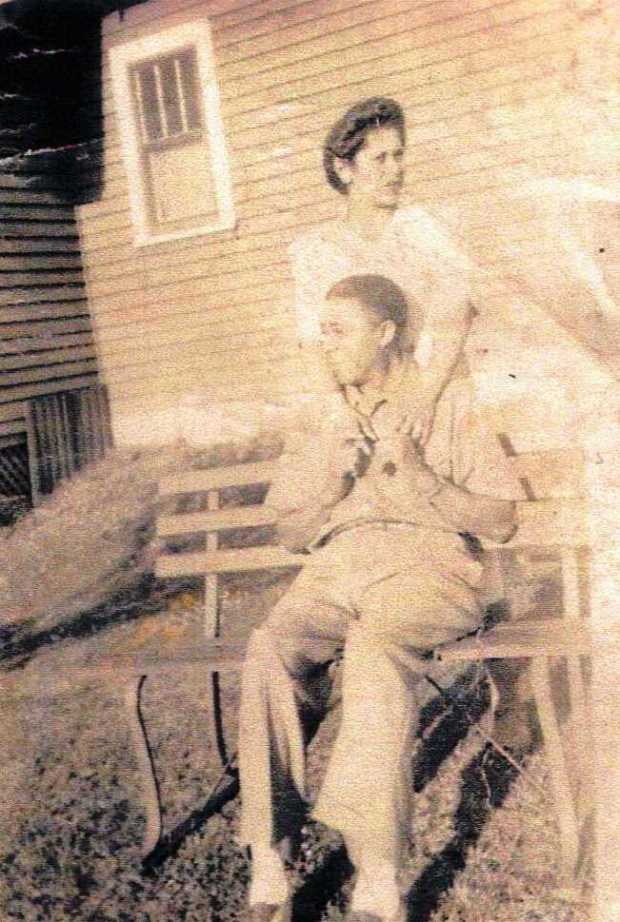 Isham Bryant registered for the World War I draft in Wilson County. Per his registration card, he was born 14 March 1893 near Clinton, North Carolina; resided at 213 Reid Street, Wilson; worked as a laborer for Will Coley, contractor; and was married with two children.

Isham Bryant died 6 September 1961 at 915 East Nash Street, Wilson. Per his death certificate, he lived at 414 North Vick Street; worked as a mechanic for Wilson Tobacco Company; was born 14 March 1894 in Sampson County to Joe Bryant and Carrie Hobbs; and was married to Roxie Bryant.

Rossie Bryant died 22 July 1984 in Wilson. Per her death certificate, she was born 1897 in Sampson County to Charlie Underwood and Rosetta Boykins; resided at 705 Edwards Street; and had worked as a tobacco factory hanger. 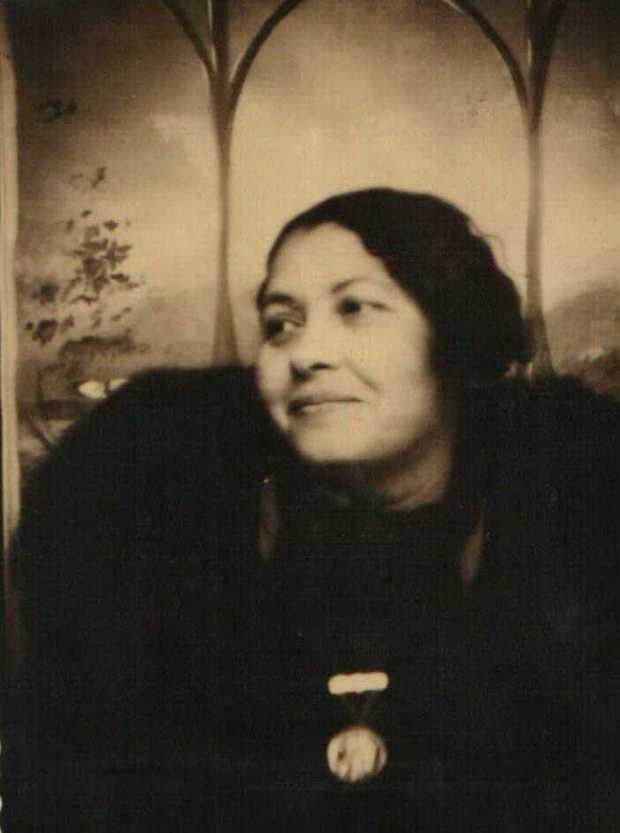