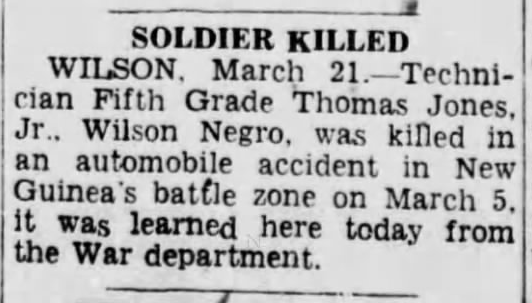 Jones registered for the draft in 1942 in Cambridge, Maryland. Per his registration card, he was born 25 December 1923 in Wilson; he lived at various locations in Cambridge and Dorchester, Maryland; his contact was Henrietta Whitlock; and he was employed by E.T. Webb, Jamesville, Virginia.

His body was returned to Wilson for burial. Howard M. Fitts Sr. handled arrangements for a military headstone to mark Jones grave in Rest Haven cemetery.

Though a corrected birth date is penciled in on the application, Jones’ stone was delivered with an incorrect date. This photo is found at www.findagrave.com.