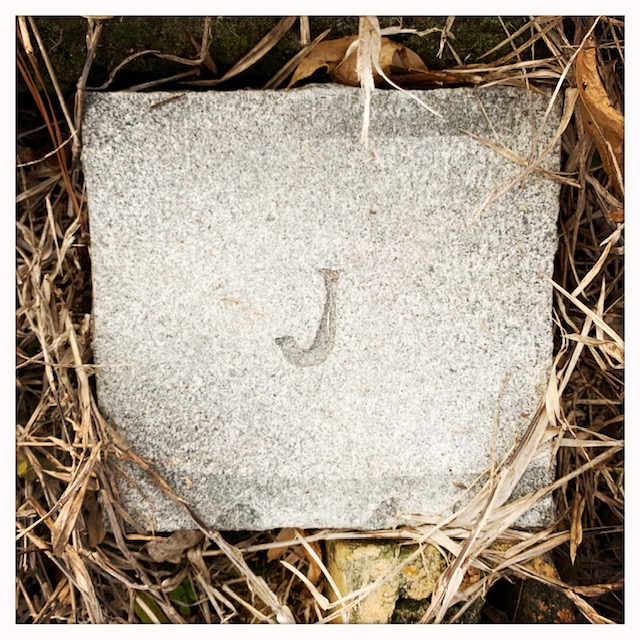 The deeply incised, irregular J’s of these granite cornerstones are unmistakably the work of Clarence B. Best. They, and a foot marker for Rev. Joseph S. Jackson, are all that remain of the Jackson family’s plot in Odd Fellows cemetery.

The grave of Jackson, a Baptist minister and tobacco factory foreman, may be the only one in the plot. Jackson’s children migrated North and West, and his wife died in Philadelphia in 1962. Annie H. Jackson’s Pennsylvania death certificate lists her place of burial simply as Wilson, N.C. However, by then Odd Fellows was in serious disrepair. She was buried in city-owned Rest Haven instead, and Rev. Jackson was disinterred and reburied beside her. When Joseph S. Jackson Jr. died in 1967, his body was returned to Wilson for burial in Rest Haven, too.

This striking portrait of James H. and Corneda Moore Jackson was probably taken around the time of their marriage in 1900. Corneda was profiled here. 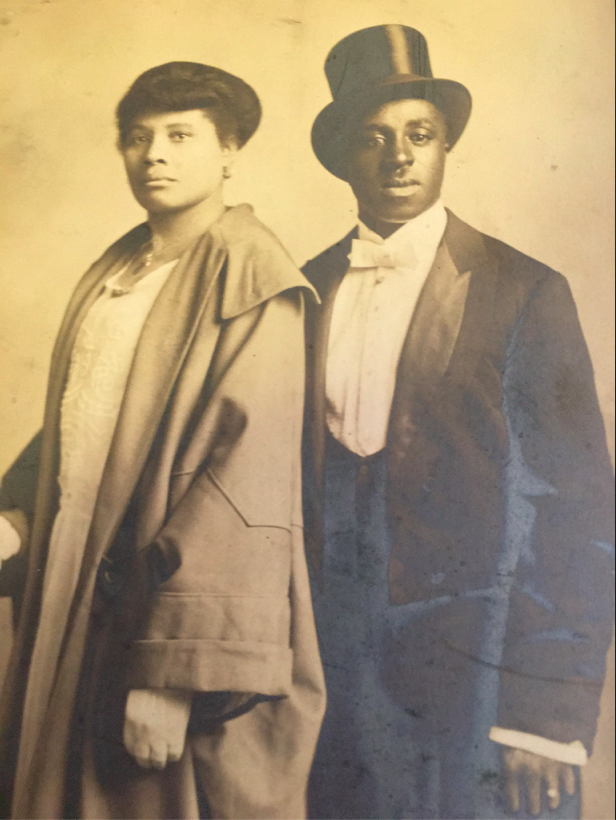 Many thanks to Sandra Morton for sharing. 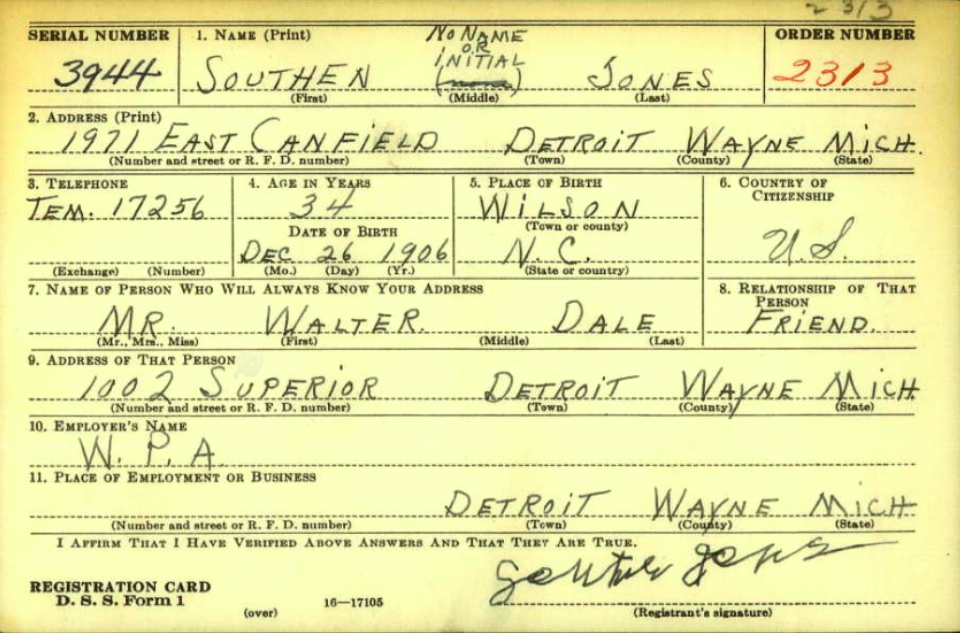 In the 1940 census of Detroit, Wayne County, Michigan: on East Canfield, renting for $50/month, Southern Jones, 33, born in North Carolina, general work-W.P.A. project. He reported that he had been living in the same place in 1935.

Southen Jones registered for the World War II draft in 1940. Per his registration card, he was born 26 December 1906 in Wilson, N.C.; lived at 1971 East Canfield, Detroit; his contact was friend Walter Dale; and he worked for W.P.A. He was described as Negro, 5’7″, 140 pounds, with brown eyes, black hair, dark brown skin, and a scar above his left eye. 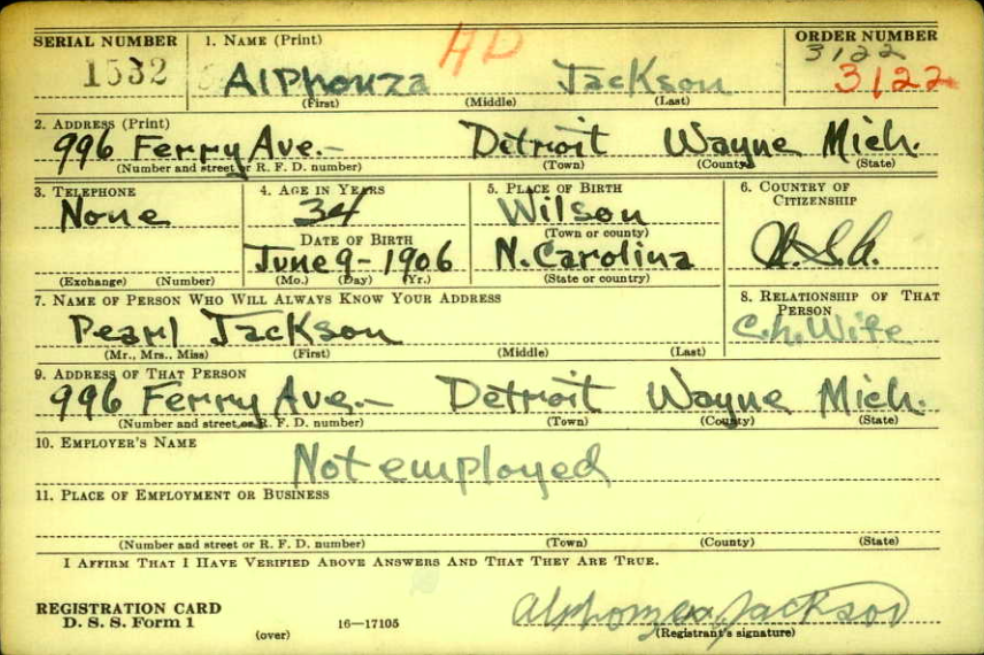 Alphonza Jackson registered for the World War II draft in 1940. Per his registration card, he was born 9 June 1906 in Wilson, N.C.; lived at 996 Ferry Avenue, Detroit; his contact was common-law wife Pearl Jackson; and he was unemployed. He was described as Negro, 5’9″, 184 pounds, with brown eyes, black hair, and dark skin. 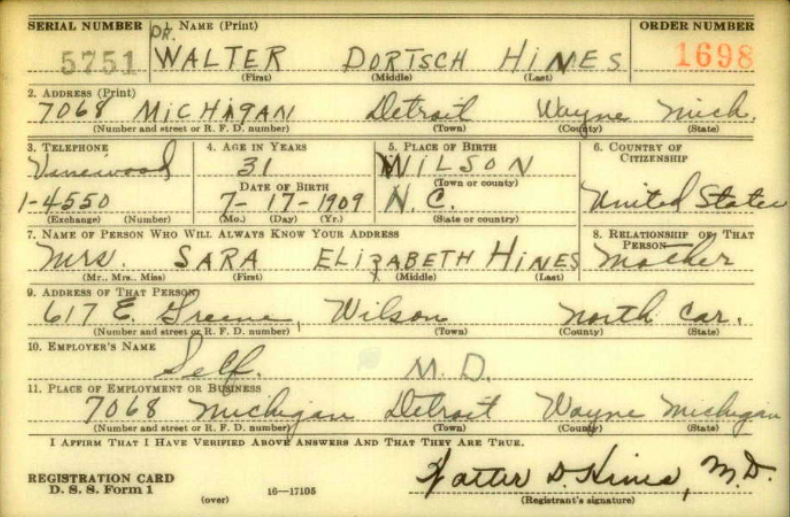 Walter Dortch Hines registered for the World War II draft in 1940. Per his registration card, he was born 17 July 1909 in Wilson, N.C.; lived at 7068 Michigan, Detroit; his contact was mother Sara Elizabeth Hines, 617 East Green, Wilson; and he was a self-employed medical doctor. He was described as Negro, 5’10”, 154 pounds, with blue eyes, brown hair, dark skin, and a scar on “dorsal aspect of left hand.” 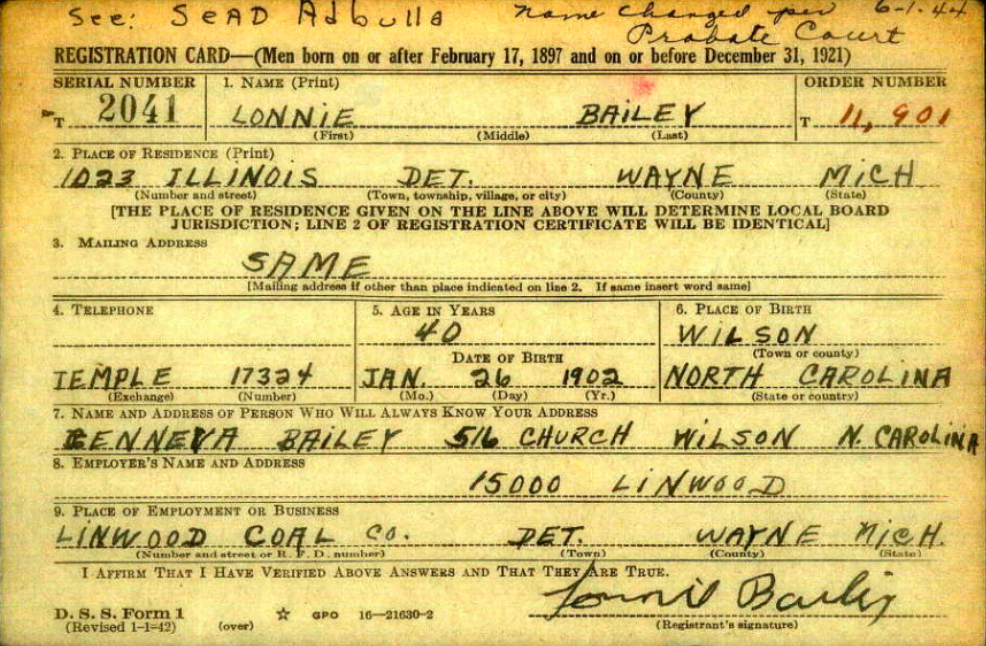 Lonnie Bailey registered for the World War II draft in 1942. Per his registration card, he was born 26 January 1902 in Wilson, N.C.; lived at 1023 Illinois, Detroit; his contact was friend Geneva Bailey, 516 Church Street, Wilson; and he worked for Linwood Coal Company, Detroit. He was described as Negro, 5’9″, 165 pounds, with brown eyes, black hair, dark brown skin, and a scar on his left wrist. Via Probate Court, Bailey formally changed his name to Sead Abdulla on 1 June 1944. [His apparent conversion to Islam is the first I have seen for a Wilson County native, and it is reasonable to assume that he was a member of the Nation of Islam, founded in Detroit.] 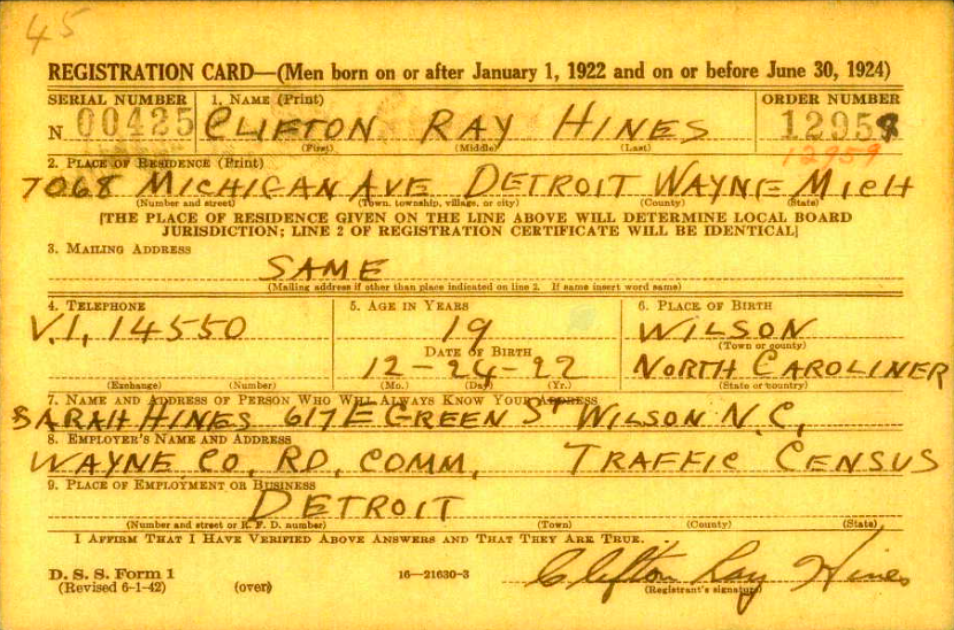 Clifton Ray Hines registered for the World War II draft in 1942. Per his registration card, he was born 24 December 1922 in Wilson, N.C.; lived at 7068 Michigan, Detroit [his brother Walter D. Hines’ home, see above]; his contact was mother Sarah Hines, 617 East Green Street, Wilson; and he worked for “Wayne Co. Rd. Comm. Traffic Census.” He was described as Negro, 5’7″, 140 pounds, with blue eyes, brown hair, dark skin, and a scar on his left cheek. 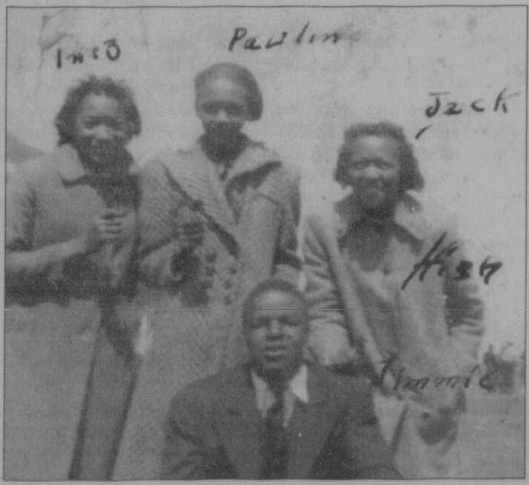 James “Casey” Ellis submitted this 1941 photo of himself and three Darden High School friends to the Wilson Daily Times, which ran it on 1 April 2003. Bell, White, and Turner graduated in the Class of 1944. 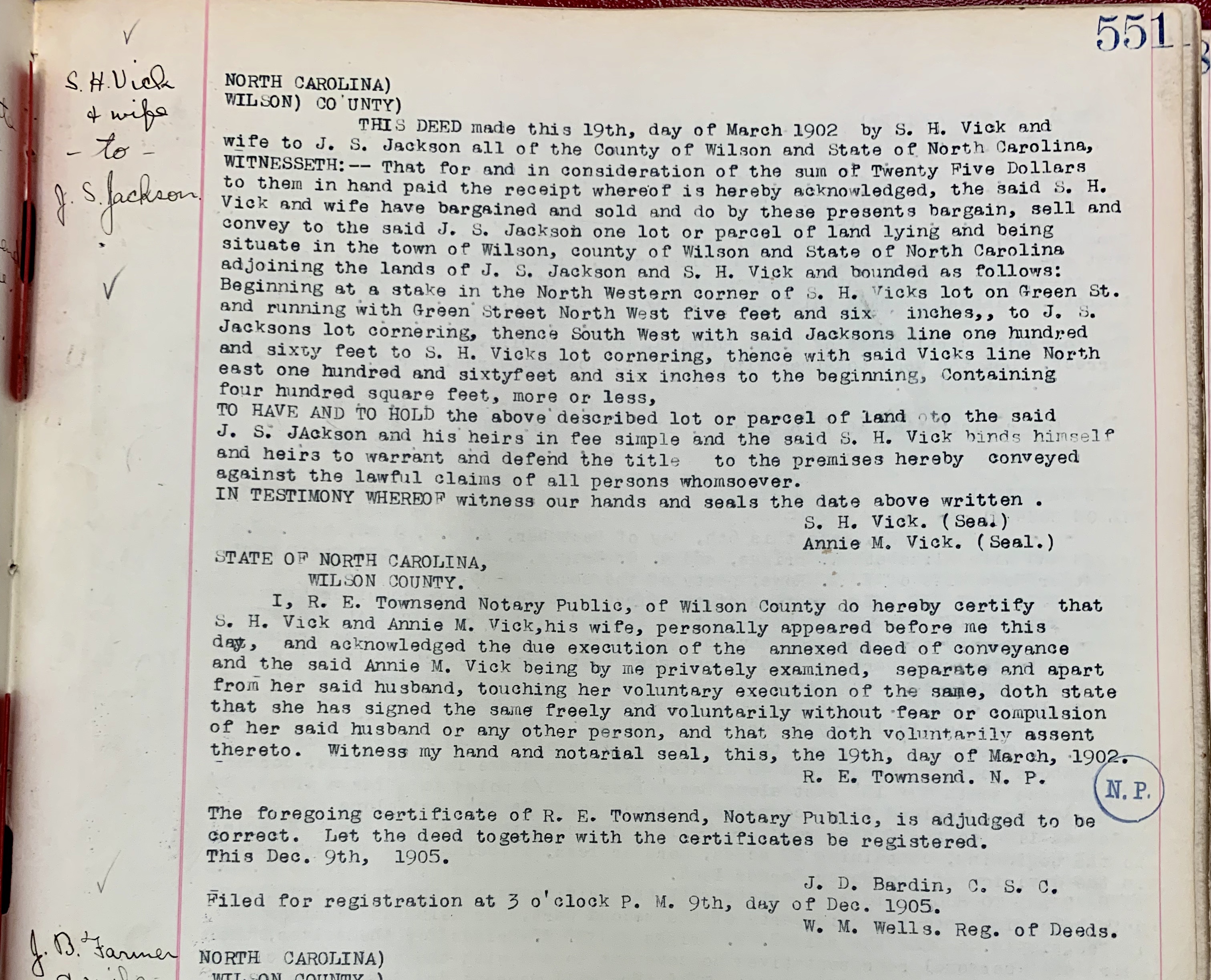 The Jacksons’ two-story house at 618 East Green Street, shown here on the 1922 Sanborn map of Wilson, no longer stands. 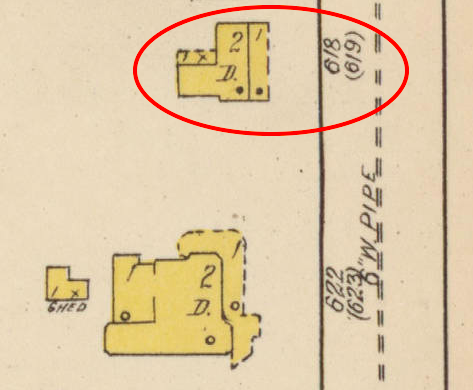 It was replaced relatively recently by this small gable-front house:

Toward the end of her life, she was featured several times in Philadelphia Inquirer articles. 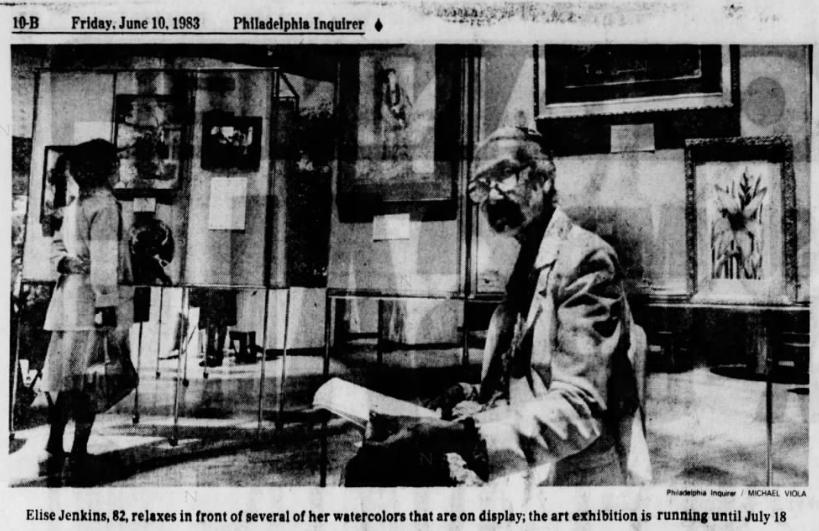 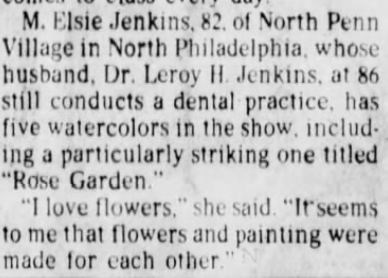 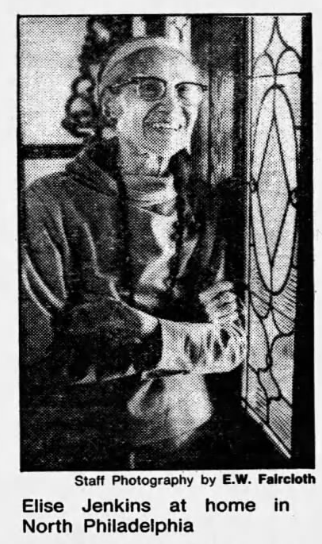 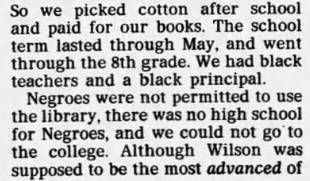 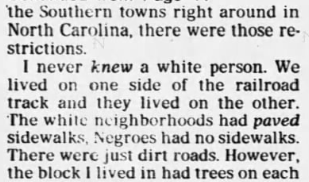 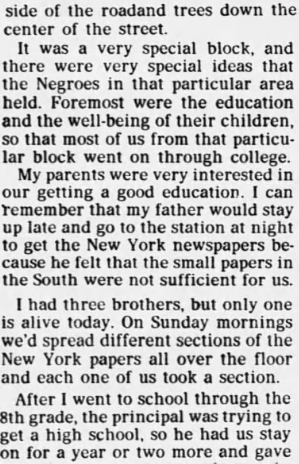 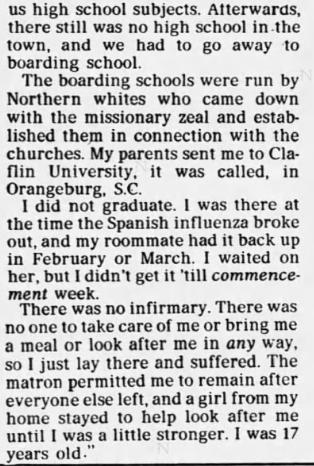 The “very special block” was, of course, the 600 block of East Green Street, home to the Vicks, the Hines/Barnes family, the Hargraves, the Reids, and other striving East Wilsonians. However, Claflin University (then College) was an unusual choice for a Wilson family. I have not been able to determine who the “girl from my home” was.

Elise Jenkins contributed keepsakes to “Let This Be Your Home,” a year-long exhibit at Philadelphia’s Afro-American Historical and Cultural Museum [now the African American Museum] chronicling the lives of “the new Philadelphians” who arrived in the city as part of the Great Migration. 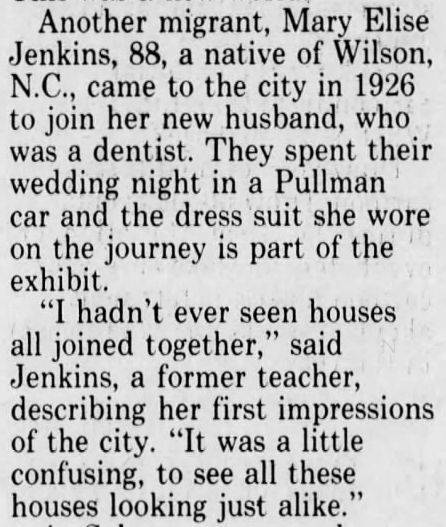 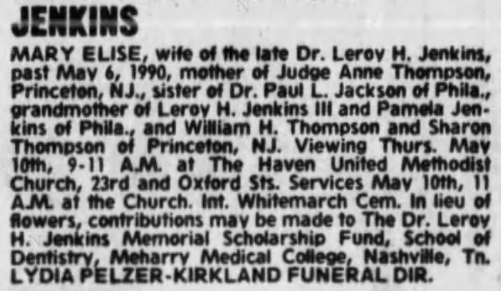 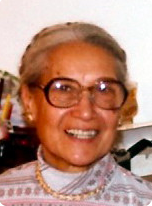 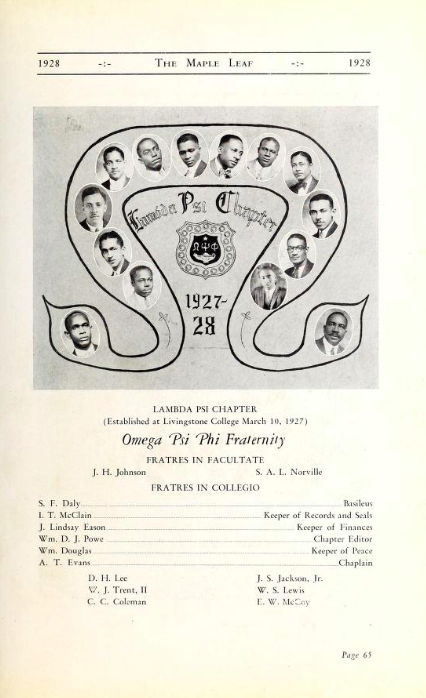 In 1927-28, his senior year at Livingstone College, Joseph S. Jackson Jr. was a member of the newly established Lambda Psi chapter of Omega Psi Phi fraternity and editor-in-chief of the yearbook, the Maple Leaf. Jackson’s photo is at the widest part of the curve of the omega, on the right. 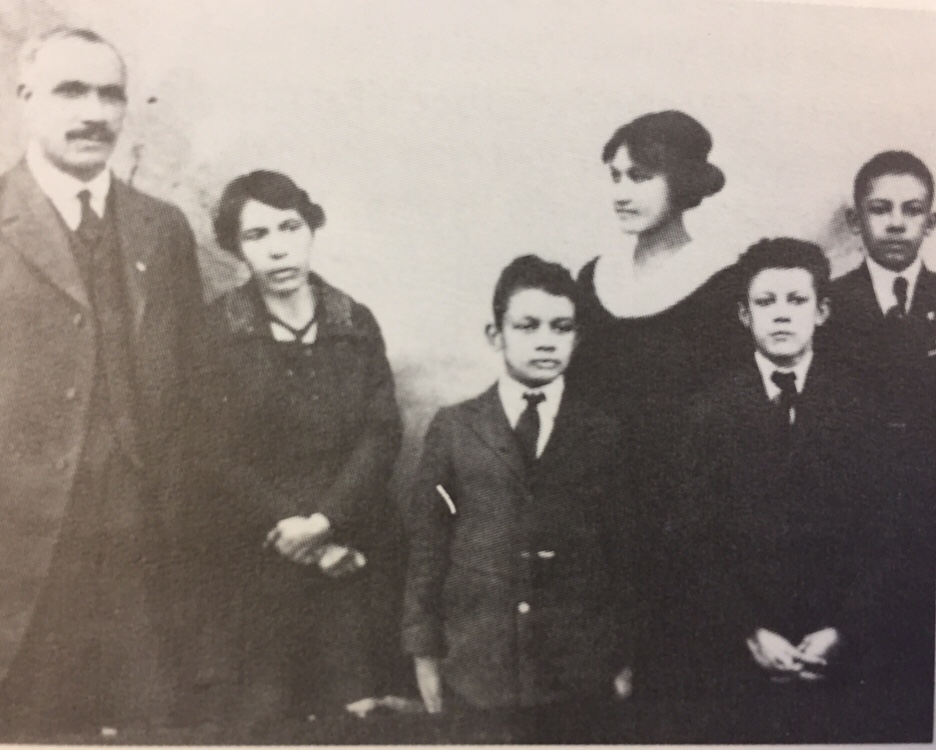 Joe Jackson came to Wilson about 1890. He went to work for Charles Fleming at Imperial Tobacco Company, where he eventually became foreman. The Episcopal church was across the street, and Jackson took night classes to learn to read and write and to study music with Rev. Perry (first name not stated).

After additional study, Jackson was ordained a minister in the A.M.E. Zion church.

In 1895, Jackson married Annie Horton of Smithfield, Johnston County, North Carolina. The family made its home at 618 East Green Street, and four of seven children lived to adulthood.

Text adapted from article in and photo courtesy of History of Wilson County, North Carolina (1985).

Joseph Sylvester Jackson died 22 October 1942 in Wilson. Per his death certificate, he was born 16 September 1870 in Granville County, North Carolina, to John Jackson; was married to Annie Jackson; resided at 618 East Green Street; was a laborer and merchant; and was buried in Rountree cemetery.

Anna Horton Jackson died 24 December 1962 in Philadelphia, Pennsylvania. Per her death certificate, she was born 20 January 1872 in North Carolina to Mary Brooks; was a widow; and was buried in Wilson, N.C. Elise Jenkins was informant.

From the 1927 Ell Cee, the yearbook of Livingstone College, Salisbury, North Carolina: 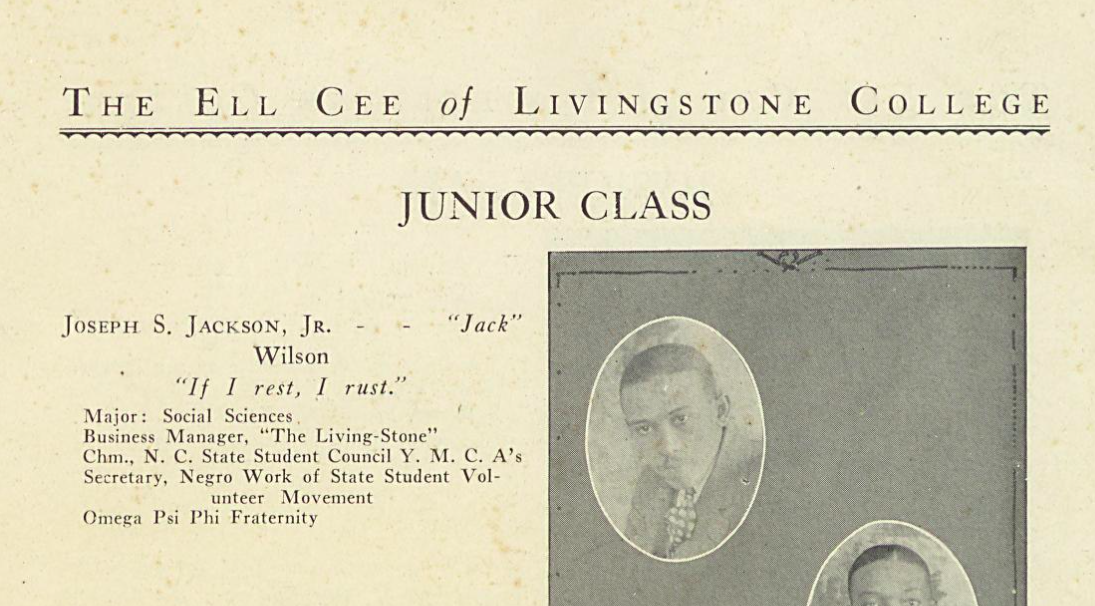 From the 1928 Maple Leaf (as the yearbook was called the following year): 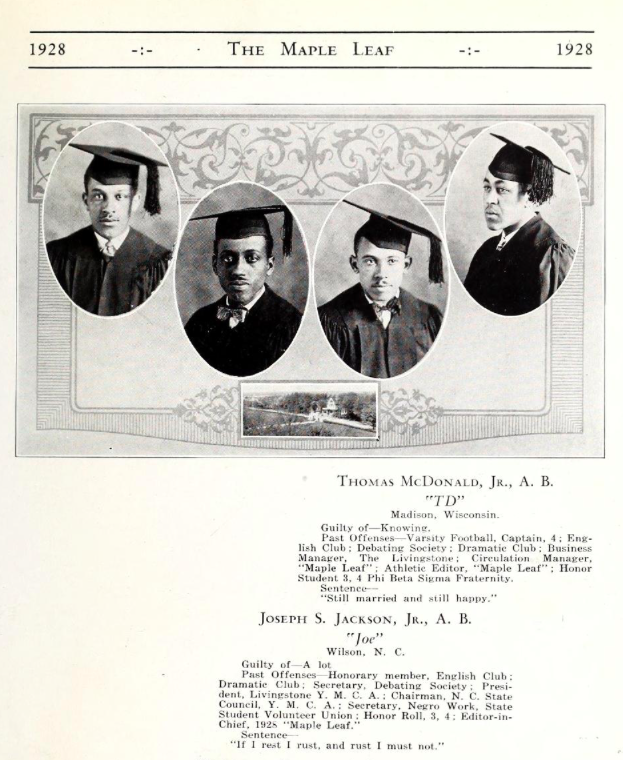 (By the way, the Student Volunteer Movement for Foreign Missions was an organization founded in 1886 that sought to recruit college and university students in the United States for missionary service abroad. (Or, presumably, among Negroes.))

Dr. Paul L. Jackson G’33, Philadelphia, a retired assistant clinical professor at the Temple University School of Dentistry who had maintained a practice in West Philadelphia for 28 years; Jan. 17. Following discharge from the U.S. Army after service in the Second World War, he taught dentistry at Howard University in Washington before setting up practice in Philadelphia in 1947.

In the 1930 census of Philadelphia, Philadelphia County, Pennsylvania: at 1304 Carpenter Street, North Carolina-born Paul Jackson, 23, laborer on wharves, listed as a nephew of Thomas and Louise Duncan.

In the 1940 census of Philadelphia, Philadelphia County, Pennsylvania: at 5222 Race Street, Paul Jackson and wife Catherine, both public school teachers. 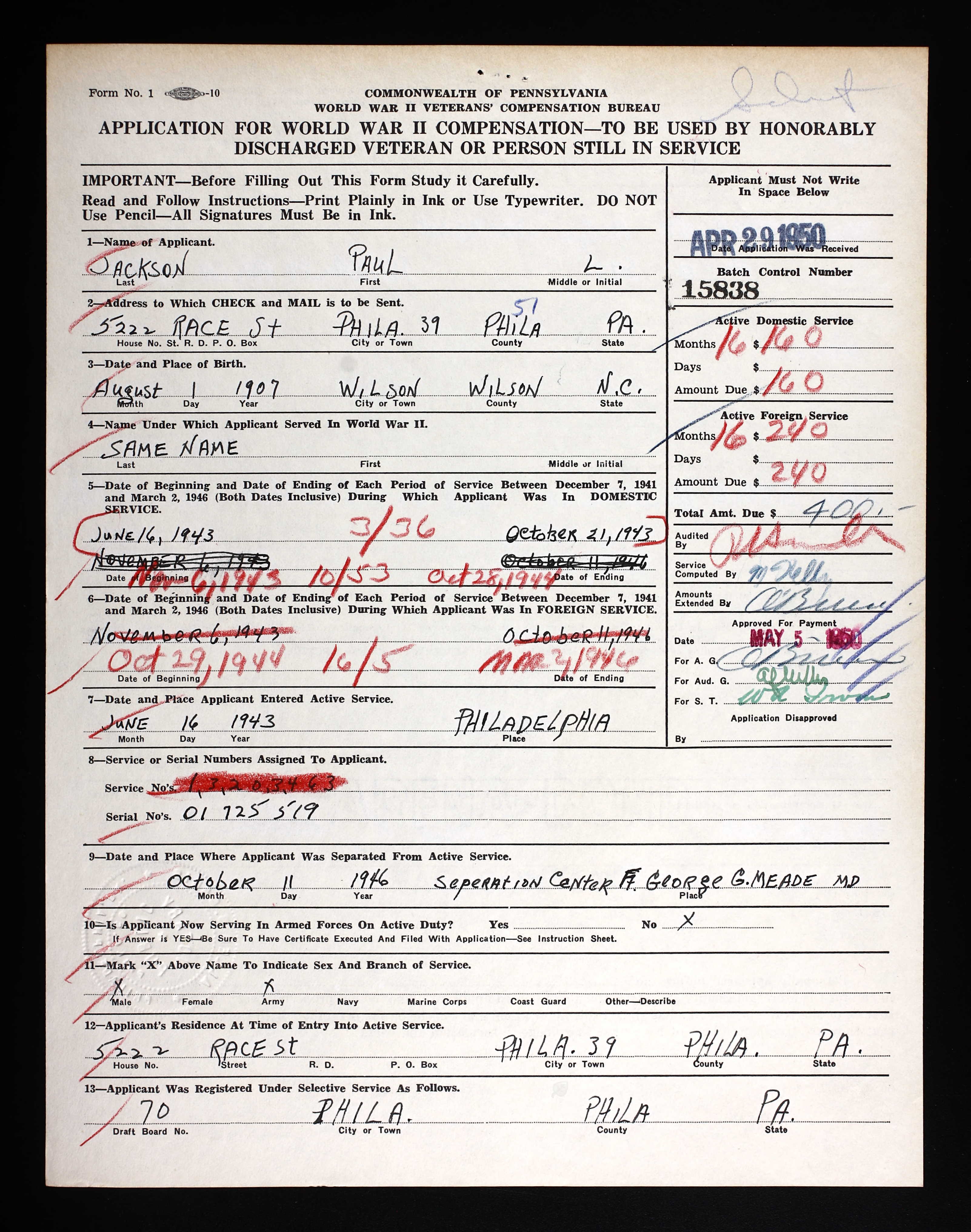 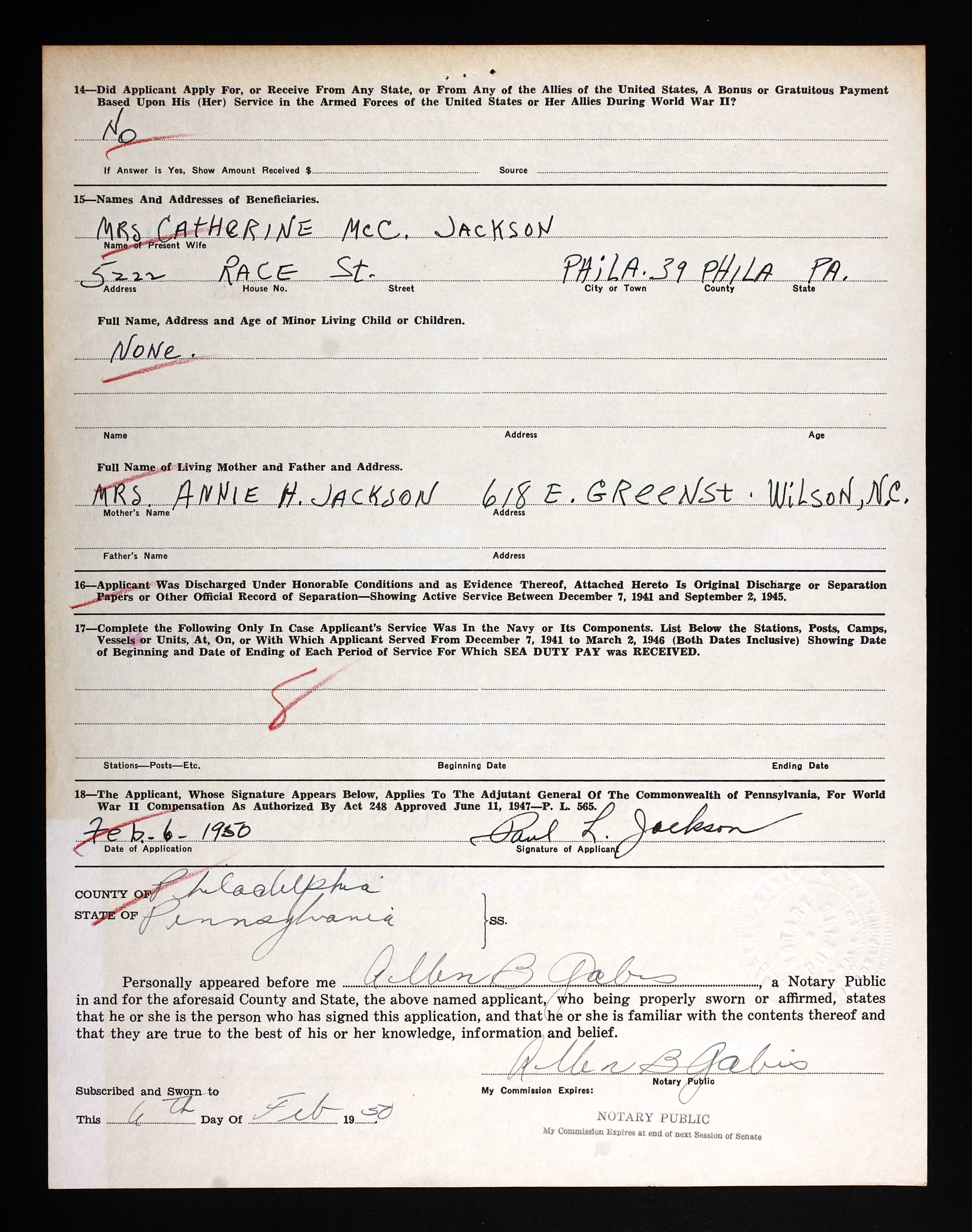 Paul L. Jackson, 94, a dentist in West Philadelphia for 28 years, died last Thursday of pneumonia at Stapeley Hall, a retirement home in Germantown.

After his discharge, he taught dentistry at Howard University in Washington before establishing a practice at his home in West Philadelphia in 1947. In addition to his private practice, Dr. Jackson was an assistant clinical professor at Temple University School of Dentistry.

He was a member of the New Era Dental Society, the Philadelphia County and American Dental Associations, and the Omega Psi Phi and Chi Delta Mu fraternities. He was active in the Boy Scouts and was a former trustee of Alleyne Memorial A.M.E. Zion Church in West Philadelphia.

He is survived by his wife of 11 years, Margaret Trummell Williams Jackson; his first wife, Catherine McCaine Jackson, to whom he was married for 56 years, died in 1990.

A memorial service will be held at 1 p.m. Feb. 9 at Stapeley Hall, 6300 Greene St. Burial arrangements are private.