In 1940, 29 year-old Langstard Miller registered for the Word War II draft in Wilson County. A native of Saint Louis, Missouri, Miller listed his address as 700 Stantonsburg Street, Wilson, the home of his friend Betsy Freeman. [Was this actually his permanent address or just a mailing address?] Miller listed his employer as Dr. C.S. Robinson Minstrel Show, based on Wilmington, North Carolina.

Betsy Freeman was not living at 700 Stantonsburg Street when the census enumerator arrived in 1940. Rather, the censustaker found City of Wilson laborer George Freeman, 56; wife Effie, 45, tobacco factory laborer; son James, 26, tobacco factory laborer; and grandchildren Edward, 13, and Doris Evans, 11. The latter were the children of Bessie [sic] Freeman and James Evans, whom she had married in Wilson on 23 June 1925. [Was Betsy/Bessie Freeman also a minstrel show employee?]

Robinson’s Silver Minstrels were a white-owned tent show that featured African-American performers. The “Repertoire-Tent Shows” section of the 21 November 1942 issue of The Billboard magazine featured this short piece: 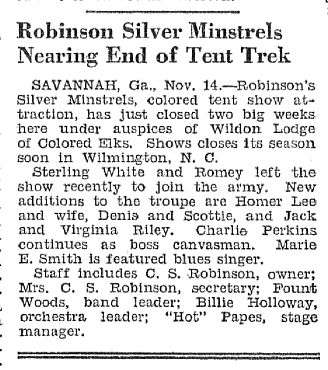 A few months later, in the 27 February 1943 Billboard, Robinson’s Silver Minstrels advertised for “colored performers and musicians, girl musicians OK; trumpets, saxophones, piano player, chorus girls, novelty acts.” The company promised the “highest salaries on road today” and a “long, sure season.” “All performers who have worked for me in past, write” to the show’s Clinton, N.C., address.

Alfred L. Moore is listed as a junior in the 1903-04 Tuskegee Institute Annual Catalogue.

Artelia M. Darden is listed in A Preparatory Class in the 1905-06 catalogue.

Many of East Wilson’s streets were laid out on parcels of land owned by African-Americans and still bear the names they chose.

When originally platted, this was Booker T. Washington Avenue. Washington, who had personal ties to Samuel H. Vick and O. Nestus Freeman, famously visited Wilson in 1910.

Freeman Street was named for the Julius Freeman family, who owned land in the area and whose most prominent member was Oliver Nestus Freeman.

Below, a figure holding a level, said to be O. Nestus Freeman, standing atop a wall at the construction site of the second iteration of Calvary Presbyterian Church, completed in 1924.

This copy of a photograph is said to show O. Nestus Freeman‘s workmen building Our Redeemer Lutheran Church on West Vance Street, Wilson. Does it though?

Freeman came out of retirement to direct the stonework at Our Redeemer, which was completed after World War II. The photo above is undated, but appears to date from earlier in the twentieth century. Moreover, this crew is clearly building an addition to a pre-existing church.

Here’s a photo of Our Redeemer published at the church’s 25th anniversary at the Vance and Rountree Streets site. (The building itself was not completed until after 1941.) This does not appear to be the same church as the one above. The men above are laying brick, not stone. The buttresses between the windows below do not appear in the image above. And the windows themselves are much taller in the image above. The church’s raised stone rake is also missing from the gable end above. 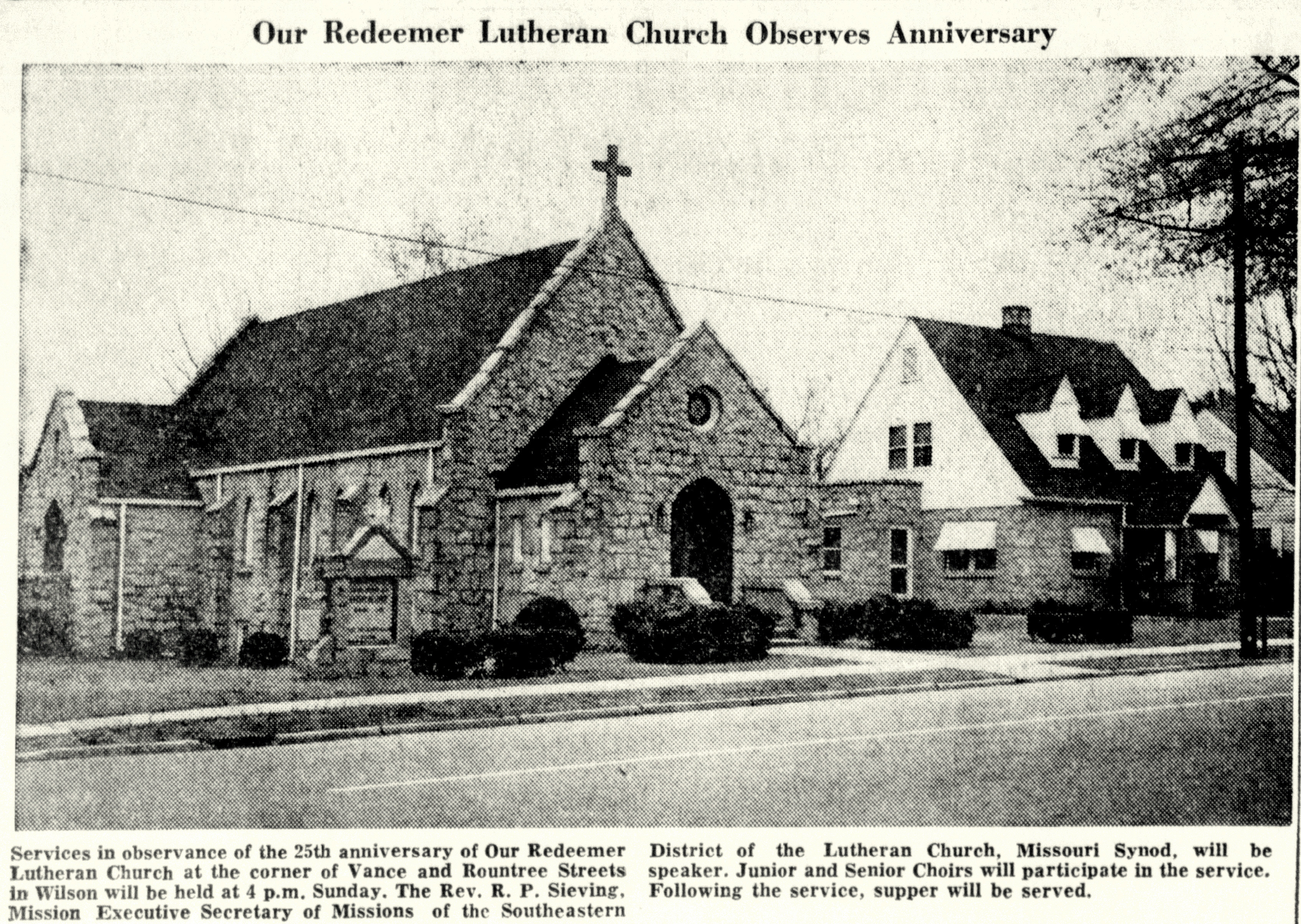 On 1 September 2001, the Daily Times featured a long piece contributed by Robert B. Lineberger, whose father was pastor at Our Redeemer in the early 1940s. In pertinent part, here is Lineberger’s recollection:

“Oliver Nestus Freeman was the stone mason for the church. The stone was delivered to the lot in 1942. It was supposed to be 4 inches thick, and the supplier brought half to it from the quarry at Roleville [Rolesville, in Wake County, N.C.] and dumped it on the lot when no one was there. It was 8 inches thick. When the quarry realized its mistake, they said Dad could have it at half price if he would accept it where it was.

“[My father] acted as general contractor for the church. During the early war years contractors and builders were doing all the work they could at Seymour Johnson Air Force Base and Camp Lejeune. He hired Mr. Freeman, who came out of retirement to build the church.

“Mr. Freeman then lived in a stone house off of East Nash …. I mixed mortar for him and placed the stones at his directions on the scaffold on which he worked. He chose each stone for a particular place as he worked. I worked with him for a long time during the summer and after school of the year the church was built.

“Mr. Freeman was a fine man, and I learned a lot about stone masonry, mixing mortar and life from him. …”

Lineberger provided some photographs of construction, including these: 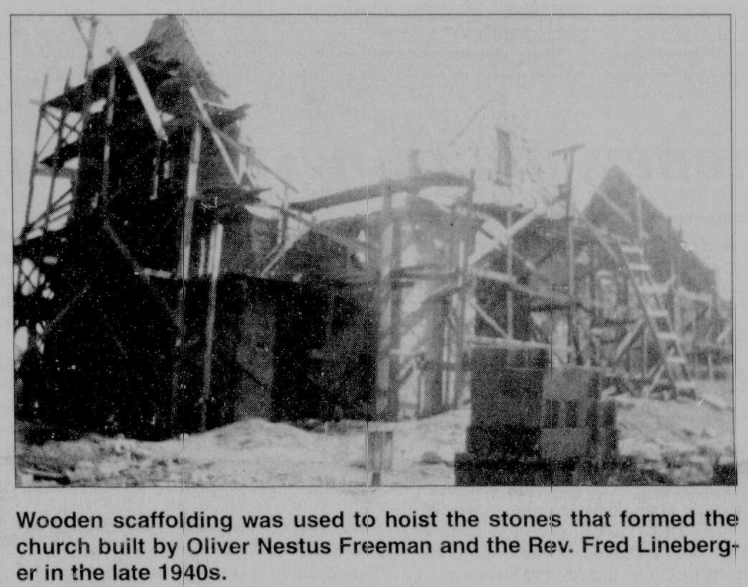 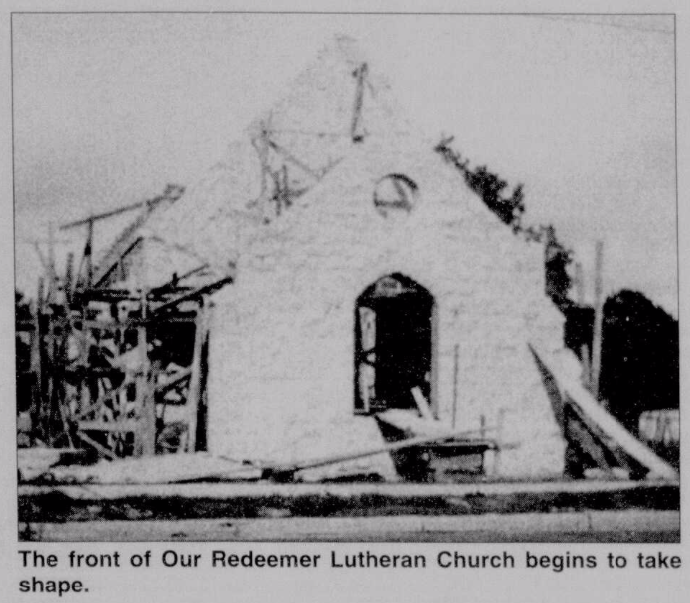 These images further strengthen my belief that the first photograph depicts Freeman’s crew working on some church other than Our Redeemer.

O. Nestus Freeman‘s stonework was not limited to houses. Below, a mailbox stand he created for his good friend John W. Woodard, who lived west of Wilson on Tartts Mill Road.

O.N. Freeman kept six bears at his home at 1300 East Nash Street, including Topsy, who could ride a tricycle. Below, in 1930, Topsy and two of Nestus and Willie Mae Freeman‘s daughters, Mary Frances and Connie. 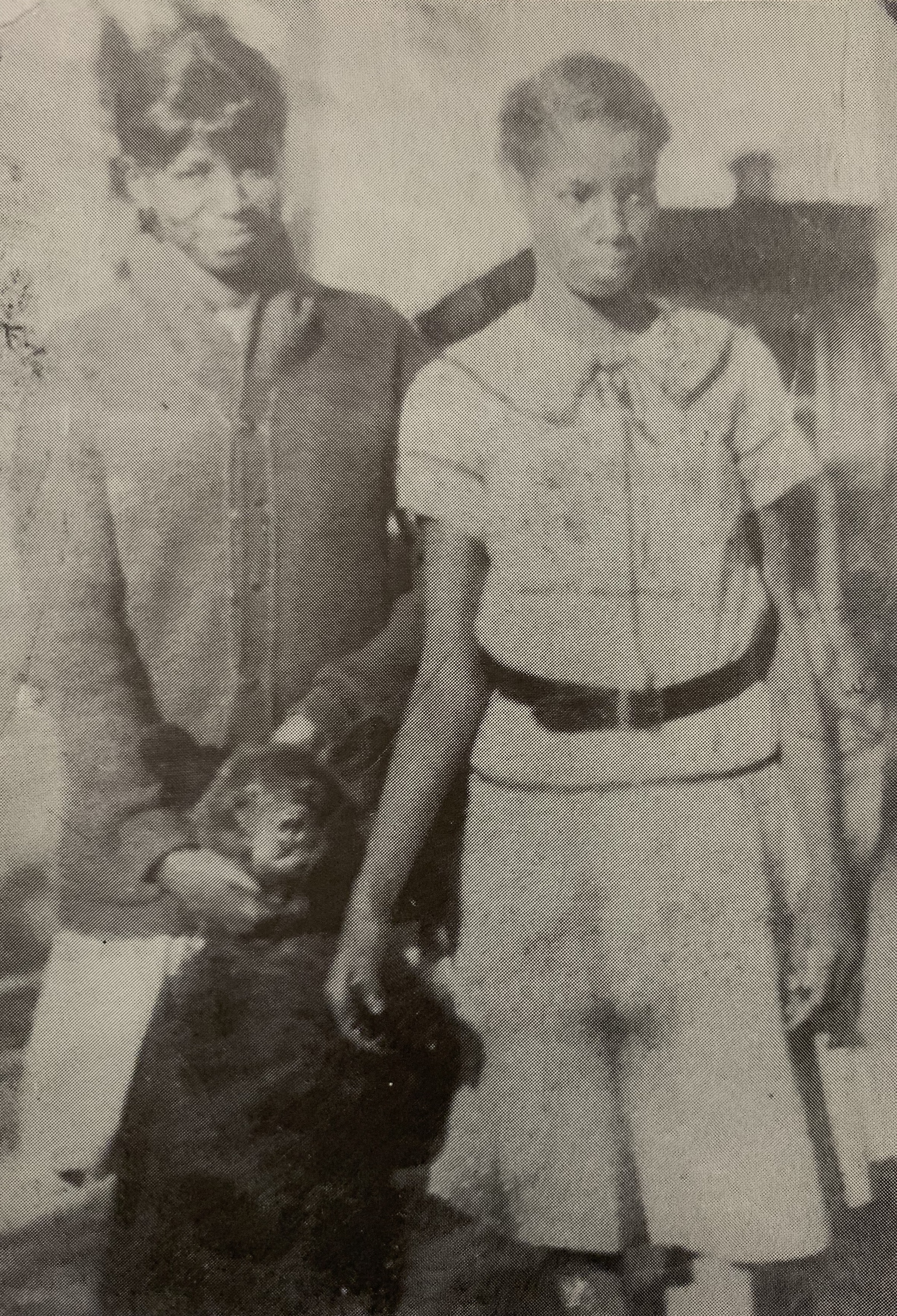 Photo courtesy of Connie Freeman Banks’ memoir, The Way We Were. 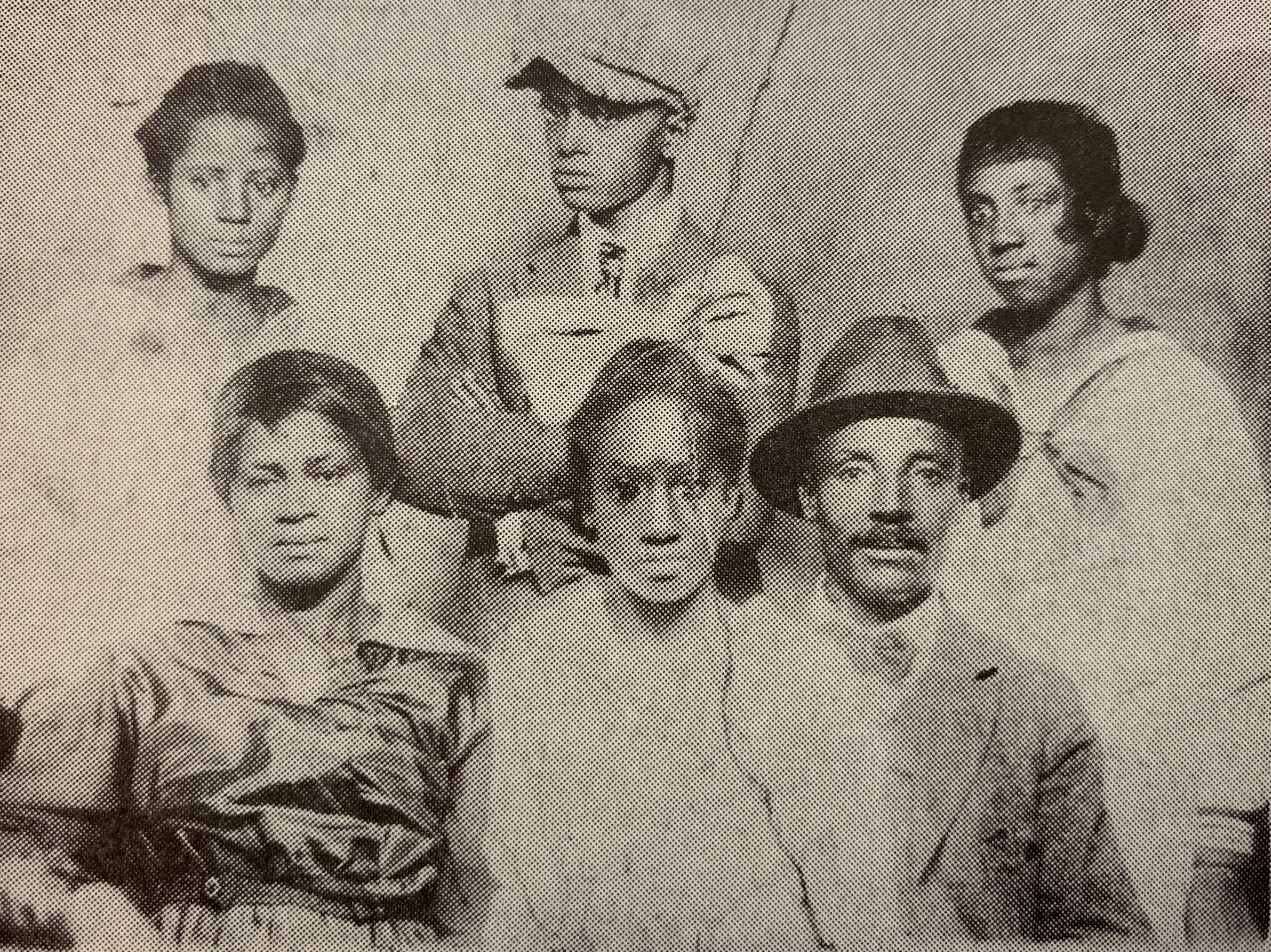 In November 1938, Oliver Lovett Freeman applied for Social Security benefits. His application noted that he was born 12 November 1869 in Wilson, N.C., to Julious Freeman and Eliza Daniel.

In 1942, Cornelius Pitt registered for the World War II draft in Nash County. Per his registration card, he was born 6 October 1921 in Rocky Mount; lived at 1110 West Thomas; his contact was Oliver Freeman, 1113 West Thomas; and he worked for Emerson Shops, A.C.L. [Railroad], Rocky Mount.

Per Findagrave.com, Freeman died 26 June 1955 and is buried in Northeastern Cemetery, Rocky Mount.

Photo courtesy of Mary Freeman Ellis, The Way We Were. 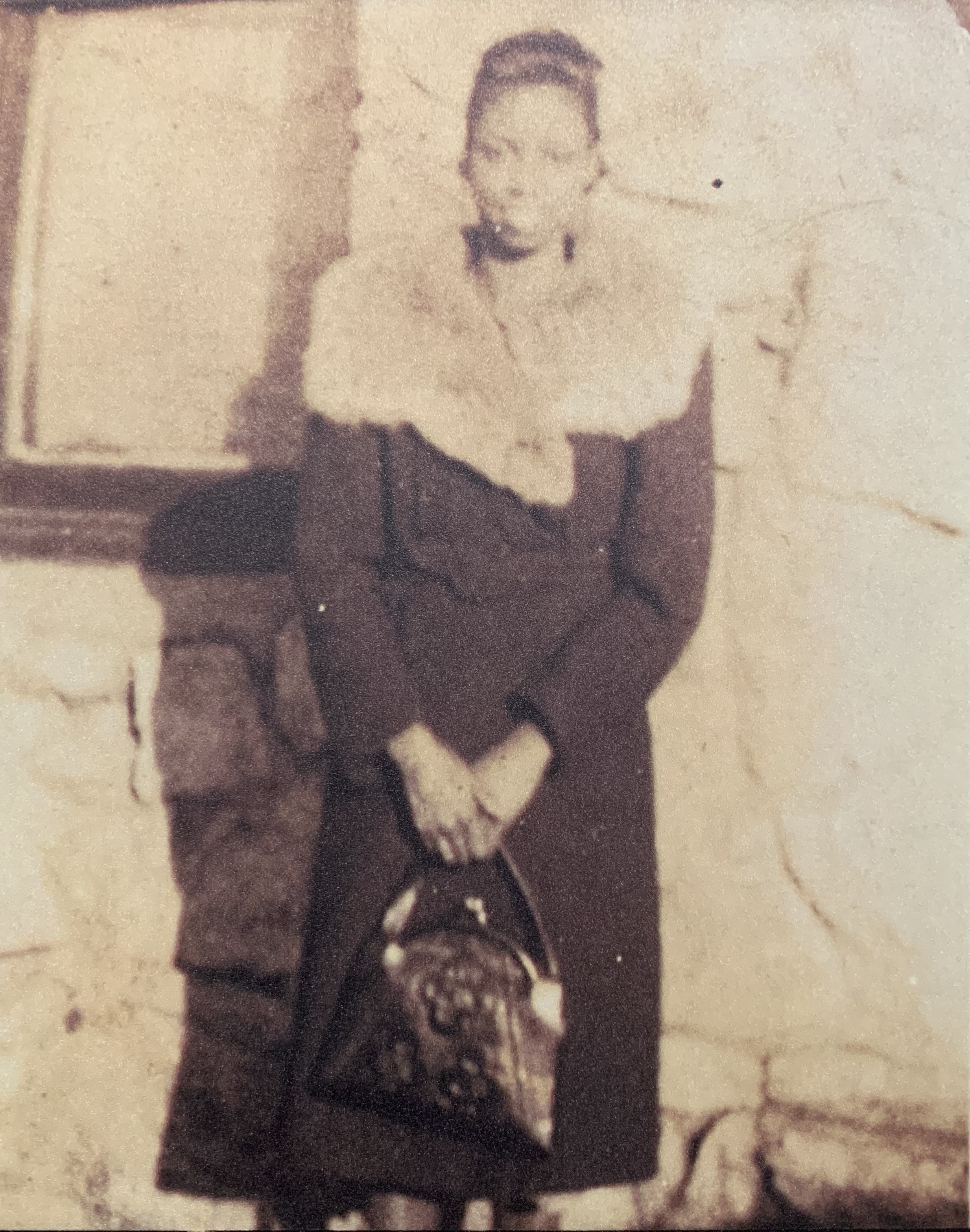 The identity of this woman is unknown, though she appears to be standing in front one of O. Nestus Freeman‘s stone-clad buildings. The photograph is found in the O.N. Freeman Family Collection, and a copy is displayed in the Round House and Museum.

[Update, 11 February 2020: Many thanks to Lossie Freeman for identifying this young woman as Connie Frances Freeman Banks, daughter of O. Nestus and Willie Hendley Freeman.]