During academic year 1882-’83, 73 of Lincoln University’s 214 students were from North Carolina. Five of that 73, all in the collegiate division, were from Wilson County: juniors Frank O. Blount, Cato D. Suggs [Daniel Cato Suggs], and Samuel H. Vick; sophomore Braswell R. Winstead; and freshman Francis M. Hines (whose home was Toisnot.)

N.B.: Though Francis M. Hines’ home was listed as Toisnot, now Elm City, and firmly within Wilson County, it seems certain that he was in fact from the Temperance Hall area of Edgecombe County, a few miles east and just across the county line. Hines graduated from Lincoln in 1886 and, upon his return to Edgecombe County, plunged into local politics. He quickly rose to leadership of the Knights of Labor and, on the strength of the African-American voting power in a county in which they were the majority population, was elected Register of Deeds. Tragically, Hines died of kidney disease at the age of 28. Local newspapers’ laconic reports of his death did not fail to include aspersions.

He is buried in the cemetery of Pyatt Memorial A.M.E. Church in the Temperance Hall community.

From the Catalogue of Lincoln University 1920-’21:

In 1917, Alexander B. Joyner registered for the World War I draft in Atlantic City, New Jersey. Per his registration card, he was born 5 June 1896 in Wilson, North Carolina; resided at 616 Viola Street, Wilson; was single; and worked as a chair pusher for Shill Company in Atlantic City. He was described as medium height and build.

Alexander Barnes Joyner registered for the World War II draft in New York, New York, in 1942. Per his registration card, he was born 5 June 1896 in Wilson, North Carolina; resided at 249 West 139th Street, New York; his contact was “George Joyner (wife),” and he worked for the W.P.A., 70 Columbus Avenue, New York.

In 1918, Daniel Leon Vick registered for the World War I draft in Wilson County. Per his registration card, he was born 2 February 1897 in Wilson; resided at 623 Green Street; his father was born in Nash County, North Carolina; he worked for S.H. Vick; and S.H. Vick was his nearest relative. He was described as short and medium build.

In the 1920 census of Washington, D.C.: at 1455 W Street N.W., North Carolina-born Daniel Vick, 22, boarded in the household of Charles L. Jones. He worked as an office building messenger. 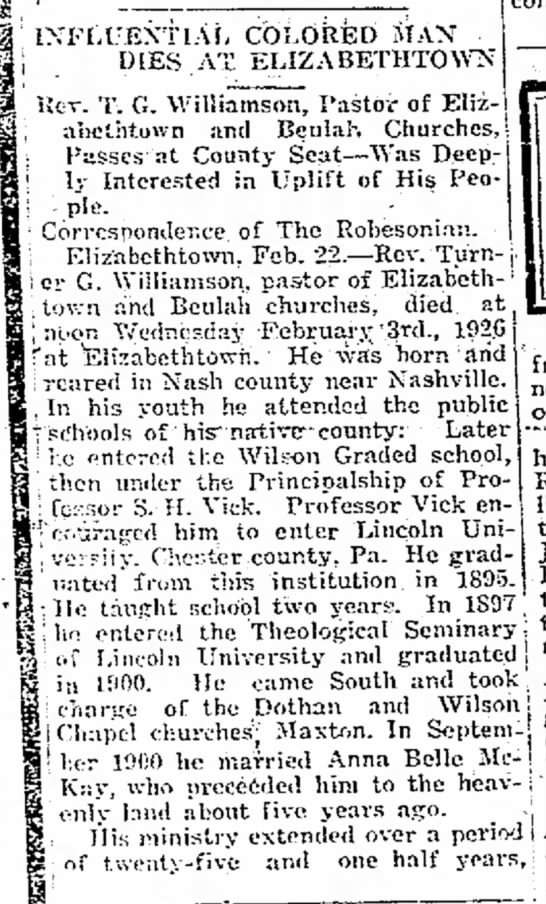 Anna B. Williamson died 1 February 1921 in Elizabethtown, Bladen County. Per her death certificate, she was born in 15 February 1875 in Maxton, North Carolina, to Edd McKoy and Sarah McKoy of Roberson County; worked as a teacher; and was married to Rev. T.G. Williamson.

Turner G. Williamson died 3 February 1926 in Elizabethtown, Bladen County. Per his death certificate, he was born about 1871 in Wilson County to Anna B. Williamson [error, Anna was his wife, not mother]; was engaged in preaching and teaching; and was a widower. 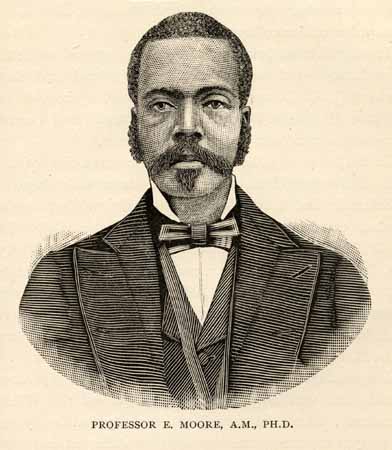 Edward Moore was born on the 22d day of June, 1853, near the town known as Little Washington, in eastern North Carolina. He was the second of seven children born to James H. and Peggy A. Moore. The first eight years of his life were spent under the watchful care and protection of both parents, but the call to arms in our late unpleasantness deprived him for a time of a father’s attention, his father having enlisted in the United States army, and served with the prospect of freeing the slaves as well as the preservation of the Union.

These years of his absence, however, were attended with no unfavorable results in the development of young Moore, for he was under the training of a vigorous, energetic Christian mother, who appreciated the advantages made possible by the opening of the Freedmen’s schools, and Edward, with the other children, shared the benefits of the instruction given by those well-educated, painstaking New England young ladies who taught in the neighborhood immediately after the war. These self-denying Christian teachers aided him, as they did many others, in laying the foundation for an early education and a subsequent life of great usefulness.

He early gave proofs of a mind noted for vigor and acquisitiveness; through the training of these schools, by private study, and later by attending the school under the principalship of W. P. Mabson, of Tarboro, N. C., at one time having the honor of being the most distinguished teacher of eastern North Carolina, Mr. Moore was prepared for college.

It was while studying at Tarboro he met and made the acquaintance and became the stanch friend and classmate of J. C. Dancy, the distinguished layman of the African Methodist Episcopal Zion Church, and the two have ever since been very sincere friends.

In the fall of 1874 he entered the freshman class of Lincoln University, Pa.; and ranked deservedly high in scholarship and manly deportment. He was here associated as classmate with the late J. C. Price, D.D.; Dr. N. F. Mossell, of the Philadelphia Medical Fraternity; Dr. Jamison, of York, Pa.; and as his college associates Rev. J. P. Williams, D.D., of the Protestant Episcopal Church; Dr. Goler, of our own Church; Dr. Weaver and Rev. W. C. Brown, of the Presbyterian, and Rev. S. P. Hood.

He graduated in 1879 with high honors. He came South and was employed as principal of the Wilson Academy, where he served successfully for two years, having in the meantime prepared for different colleges a number of young men, among whom are Professor D. C. Suggs, A.M., now vice president of the A. and M. College, Savannah, Ga.; Samuel N. Vick, Postmaster Wilson, N. C., Professor B. R. Winstead, principal of the Wilson graded school. He was also private instructor to S. A. Smith, now one of the most distinguished lawyers of the Wilson bar.

It was at Wilson that he met the accomplished Miss Serena L. Suggs, and after years of wooing succeeded in making her his wife in 1881. The result of this union has been a happy home and four healthy children, two boys and two girls, to cheer and bless his life.

In the establishment of Zion Wesley Institute, which has since become Livingstone College, Professor Moore yielded to the solicitations of his classmate, Dr. J. C. Price, and associated in the educational work of that institution. His services were of incalculable value to Dr. Price.

Professor Moore is a hard student, and possesses the ability of making the result of his study felt upon those he teaches. He is an earnest Christian, especially devoted to all that concerns Zion Church and the spread of the connection. He passed a successful examination and received the degree of Ph.D. from his alma mater in 1893. He is now spending his summer vacation in the study of medicine at San Francisco, Cal. W.H.G. 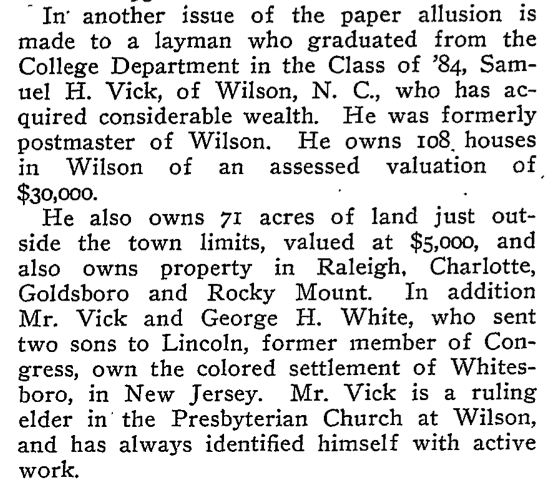 Excerpt from the “Lincoln Graduates in the South” (referring to “the Afro-American, of Charlotte, N.C., which is the leading Presbyterian weekly of the colored people of the South”) in Lincoln University Herald, October 1910, volume XIV, number 7. 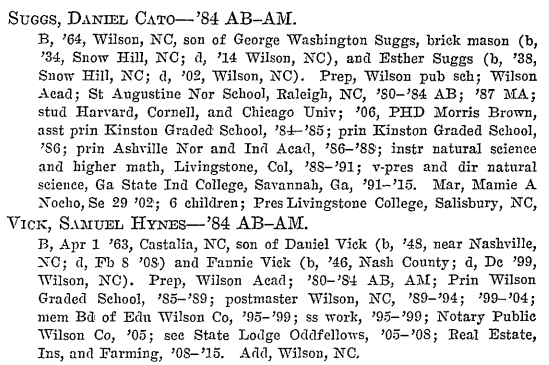 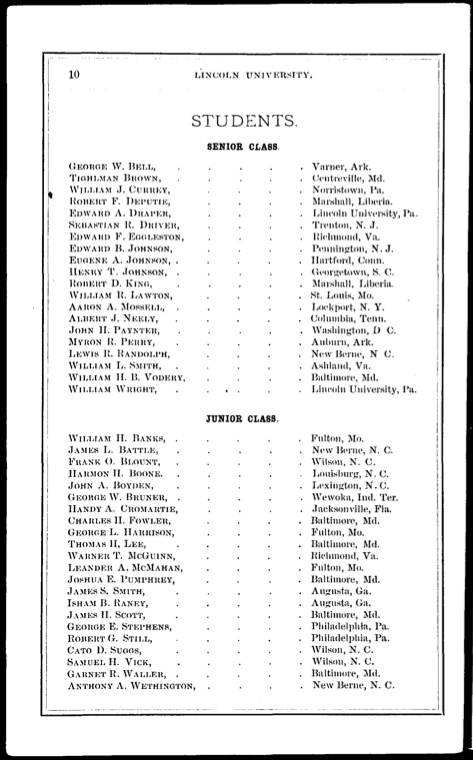 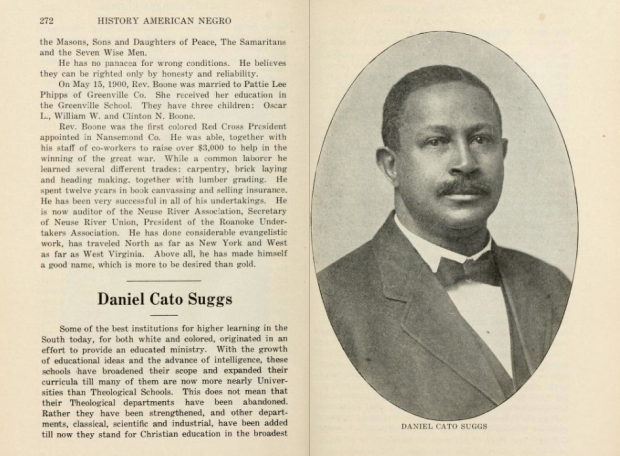 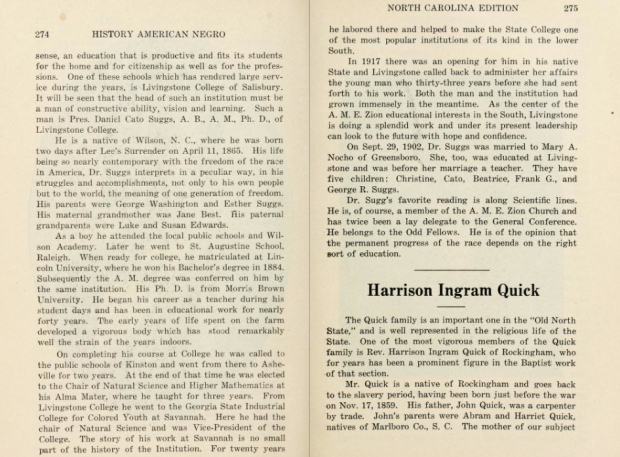 As first mentioned here, in 1884, Daniel C. Suggs was nominated as a candidate for a cadetship at West Point. It was the first public recognition of the extraordinary potential of this young man.

In the 1900 census of the 5th Militia District, Chatham County, D.C. Suggs, 35, is listed as a teacher at Georgia State Industrial College [now Savannah State University.]

Educator, politician, businessman, real estate developer, church leader — Samuel H. Vick was the most accomplished resident of East Wilson in his lifetime. (And many years after.) 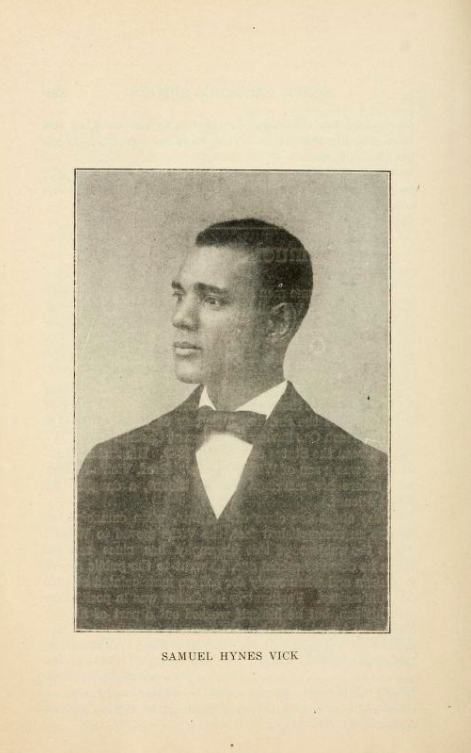