Here I blogged about Booker T. Washington’s visit to Wilson, and the photograph taken on Samuel H. Vick‘s lawn that day. On a recent visit to the Freeman Round House and African-American Museum, I examined an enlargement of that photo on exhibit. Many of the men depicted were from Washington’s entourage, but here are close-ups of the Wilson men invited to a private meet-and-greet with him. 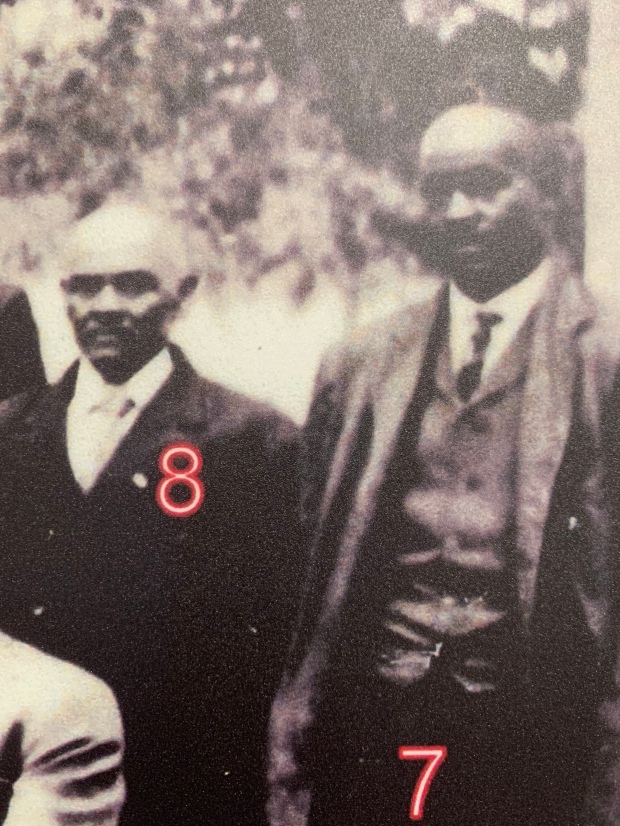 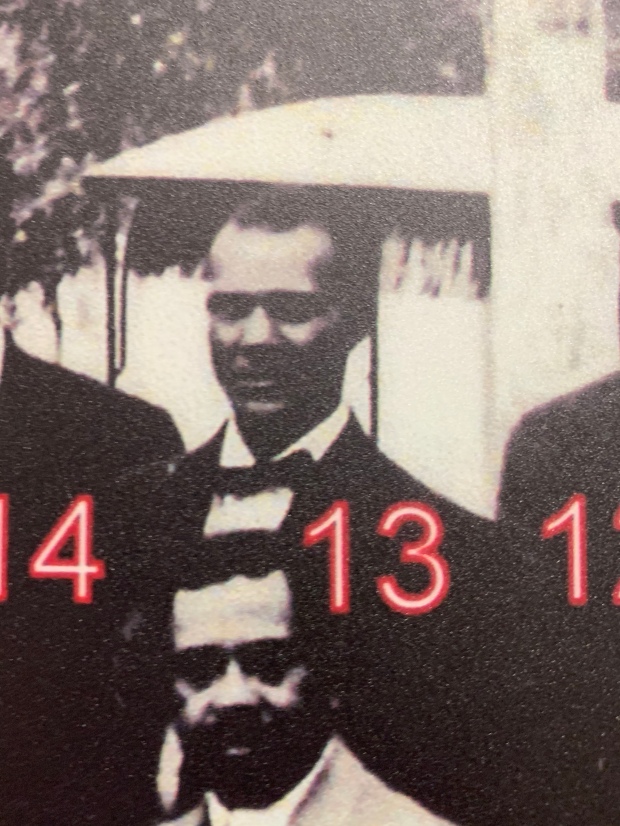 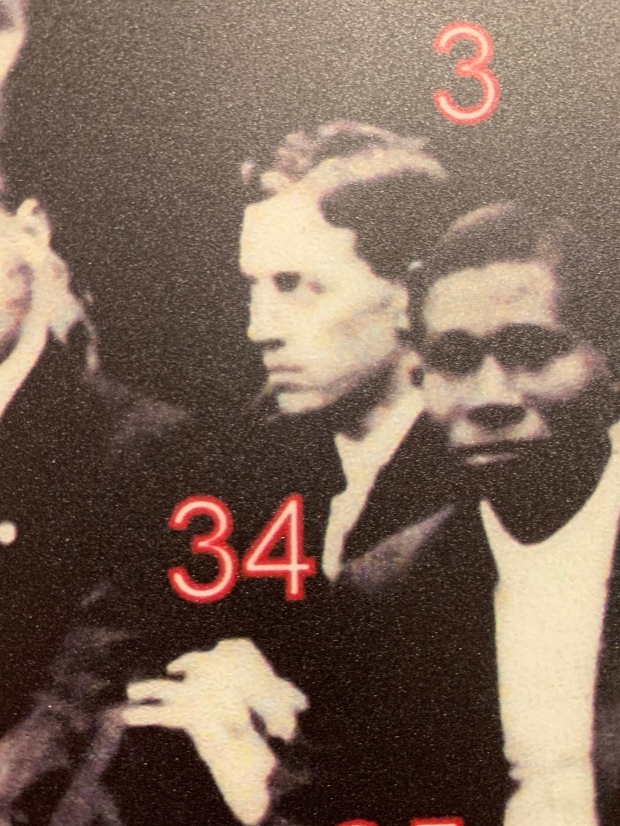 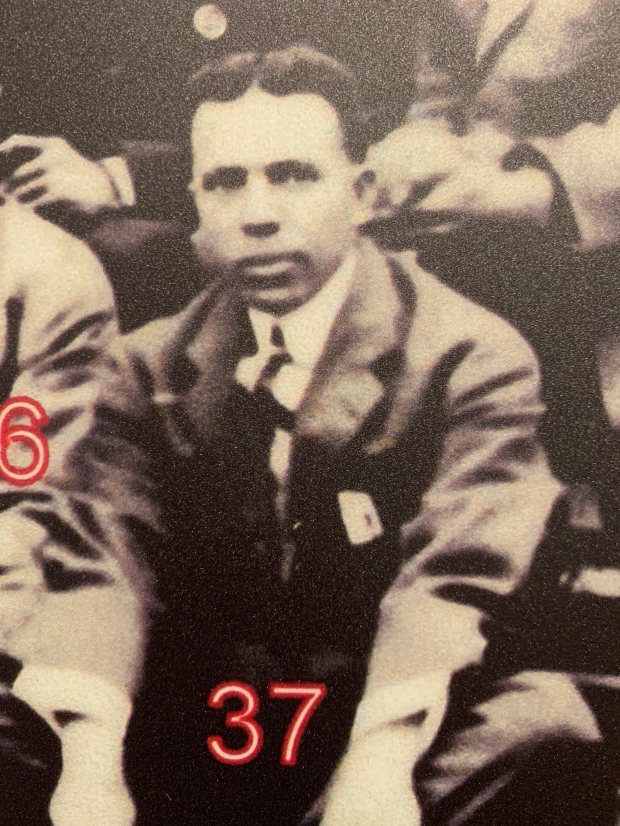 “My father’s owner was Jim Dixon in Elmo County, Virginia. That is where I was born. I am 81 years old. Jim Dixon had several boys — Baldwin and Joe. Joe took some of the slaves his pa gave him, and went to New Mexico to shun the war. Uncle and Pa went in the war as waiters. They went in at the ending up. We lived on the big road that run to the Atlantic Ocean. Not far from Richmond. Ma lived three or four miles from Pa. She lived across big creek — now they call it Farrohs Run. Ma belonged to Harper Williams. Pa’s folks was very good but Ma’s folks was unpleasant.

“Ma lived to be 103 years old. Pa died in 1905 and was 105 years old. I used to set on Grandma’s lap and she told me about how they used to catch people in Africa. They herded them up like cattle and put them in stalls and brought them on the ship and sold them. She said some they captured they left bound till they come back and sometimes they never went back to get them. They died. They had room in the stalls on the boat to set down or lie down. They put several together. Put the men to themselves and the women to themselves. When they sold Grandma and Grandpa at a fishing dock called New Port, Va., they had their feet bound down and their hands bound crossed, up on a platform. They sold Grandma’s daughter to somebody in

“Texas. She cried and she begged to let them be together. They didn’t pay no ‘tension to her. She couldn’t talk but she made them know she didn’t want to be parted. Six years after slavery they got together. When a boat was to come in people come and wait to buy slaves. They had several days of selling. I never seen this but that is the way it was told to me.

“The white folks had a iron clip that fastened the thumbs together and they would swing the man or woman up in a tree and whoop them. I seen that done in Virginia across from where I lived. I don’t know what the folks had done. They pulled the man up with block and tackle.

“Another thing I seen done was put three or four chinquapin switches together green, twist them and dry them. They would dry like a leather whip. They whooped the slaves with them.

“Grandpa was named Sam Abraham and Phillis Abraham was his mate. They was sold twice. Once she was sold away from her husband to a speculator. Well, it was hard on the Africans to be treated like animals. I never heard of the Nat Turner rebellion. I have heard of slaves buying their own freedom. I don’t know how it was done. I have heard of folks being helped to run off. Grandma on mother’s side had a brother run off from Dalton, Mississippi to the North. After the war he come to Virginia.

“When freedom was declared we left and went to Wilmington and Wilson, North Carolina. Dixon never told us we was free but at the end of the year he gave my father a gray mule he had ploughed for a long time and part of the crop. My mother jes 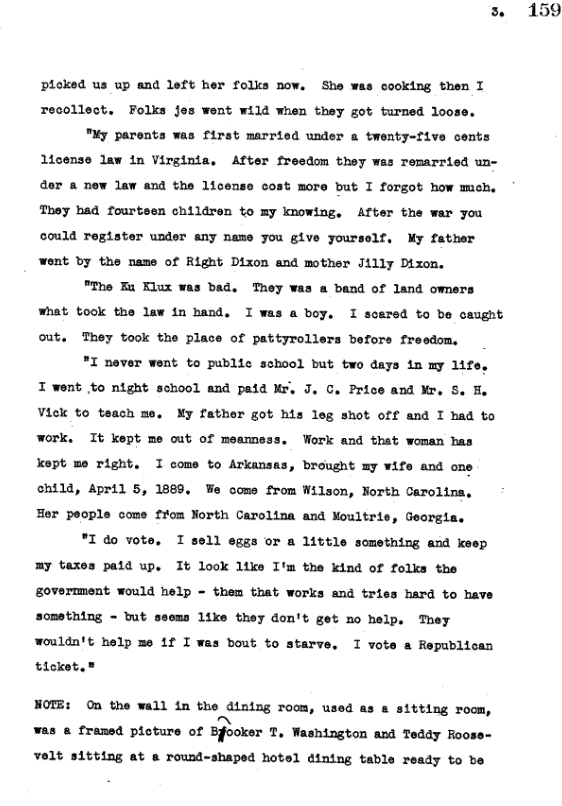 “picked us up and left her folks now. She was cooking then I recollect. Folks jes went wild when they got turned loose.

“My parents was first married under a twenty five cents license law in Virginia. After freedom they was remarried under a new law and the license cost more but I forgot how much. They had fourteen children to my knowing. After the war you could register under any name you give yourself. My father went by the name of Right Dixon and my mother Jilly Dixon.

“The Ku Klux was bad. They was a band of land owners what took the law in hand. I was a boy. I scared to be caught out. They took the place of pattyrollers before freedom.

“I never went to public school but two days in my life. I went to night school and paid Mr. J.C. Price and Mr. S.H. Vick to teach me. My father got his leg shot off and I had to work. It kept me out of meanness. Work and that woman has kept me right. I come to Arkansas, brought my wife and one child, April 5, 1889. We come from Wilson, North Carolina. Her people come from North Carolina and Moultrie, Georgia.

“I do vote. I sell eggs or a little something and keep my taxes paid up. It look like I’m the kind of folks the government would help — them that works and tries hard to have something — but seems like they don’t get no help. They wouldn’t help me if I was bout to starve. I vote a Republican ticket.”

NOTE: On the wall in the dining room, used as a sitting room, was framed picture of Booker T. Washington and Teddy Roosevelt sitting at a round-shaped hotel dining table ready to be

“served. Underneath the picture in large print was “Equality.” I didn’t appear to ever see the picture.

This negro is well-fixed for living at home. He is large and very black, but his wife is a light mulatto with curly, nearly straightened hair.

This is the image that Luke Dixon’s interviewer so studiously ignored. The event it depicted, which scandalized white America in 1901, is the subject of Deborah Davis’ recent book, Guest of Honor: Booker T. Washington, Teddy Roosevelt and the White House Dinner That Shocked a Nation (2012).

I have not found Luke Dixon or his parents in the censuses of Virginia. There is no “Elmo County,” Virginia, but New Port may have been Newport News, which was little more than a fishing village in the antebellum era.

Dixon apparently attended night school at Wilson Academy, but it is not clear when. Joseph C. Price headed the school from 1871 to 1873, when Samuel H. Vick was just a child. Vick assumed the helm at age 21 after graduating from Lincoln University.

Between 1908 and 1912, Booker T. Washington embarked upon a series of “educational pilgrimages” across several Southern states. In the fall of 1910, Washington and a phalanx of businessmen and A.M.E. Zion clergymen set off on an arc across North Carolina, making speeches and setting examples in Charlotte, Concord, Salisbury, High Point, Winston-Salem, Greensboro, Reidsville, Durham, Wilson, Rocky Mount, New Bern, and Wilmington.

The response to the announcement of Washington’s tour was positive, but not without fine points made. The Times cited an opinion piece by the Greensboro press, noting approvingly that “foremost living negro” or not, white men should not be put to the task of receiving him into their cities. There were “plenty of public spirited colored people available for that.”

Along those lines, the Times assured white Wilsonians that “special arrangements” had been made for them as “a great many seem to want to hear” Washington.

On a practical note, black veterinarian Elijah L. Reid, recently returned from a residency of sorts at Washington’s Tuskegee Institute, seized the occasion to take out a large ad in the paper touting an endorsement by the Wizard himself. 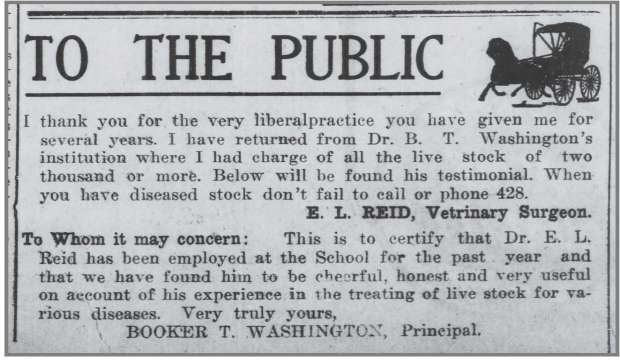 A commemorative poster and ticket from the event are here. By all accounts, the Wilson stop was a great success. Washington rubbed elbows with Sam Vick and other local heavy-hitters, including all three of the town’s black doctors and several of its most accomplished building tradesmen. The visit happily coincided with the ground-breaking for a new First Baptist church, and Washington laid its cornerstone. The next day, as Washington’s special Pullman car rolled out of town, Raleigh’s News & Observer ran a pleasant piece emphasizing the gaiety of the occasion.

In its next publication, the Times — with a gracious nod to “ex Congressman F.A. Woodard” — also commented favorably upon the evening’s events and published excerpts from Washington’s speech.

The photo below was apparently taken early in the day before the main event. The instantly recognizable Booker T. Washington is seated center, surrounded by his all-star retinue of traveling companions and Wilson’s African-American luminaries. Below the image, more about these men. (Wilson residents, as usual, are in bold text.)

The photo that ran several days later in the New York Age seems to show only the Visiting V.I.P. contingent. 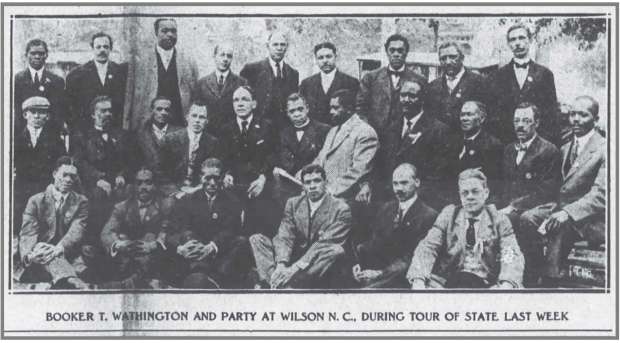 For a brief description of Washington’s Wilson visit embedded in a detailed account of his entire North Carolina tour, see David H. Jackson’s Booker T. Washington and the Struggle Against White Supremacy (2008).

Many thanks to Representative G.K. Butterfield, D-N.C., who provided the numbered photograph and a key listing the names of the men depicted. That key was the basis of the expanded list above.