In response to John J. Pender’s claim to three African-American children, Jenny Robbins sent a sworn statement to the Freedmen’s Bureau. Reading between the lines suggests that Pender’s bald claim that Toney Robbins was not the children’s grandfather split hairs. They were, it seems, Jenny Robbins’ grandchildren by blood and Toney Robbins’ by marriage. Note that Robbins gives their surname as Turner, not Pender as set forth in the 1870 census and in J.J. Pender’s claim. 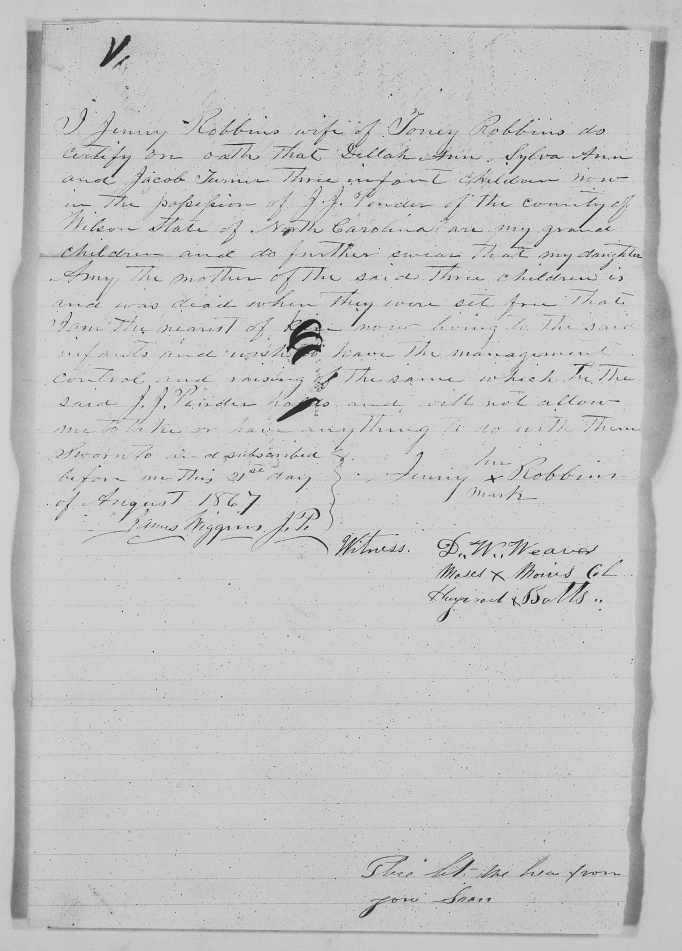 I Jenny Robbins wife of Toney Robbins do certify on oath that Dellah Ann Sylva Ann and Jacob Turner three infant children now in the possession of J.J. Pender of the county of Wilson state of North Carolina are my grand children and do further swear that my daughter Amy the mother of the said three children is and was dead when they were set free that I am the nearest kin now living to the said infants and wish to have the management control and raising of the same which he the said J.J. Pender haves and will not allow me to take or have anything to do with them     Jenny (X) Robbins

Sworn to and subscribed before me this 21st day of August 1867 James Wiggins J.P.

Plece let me hear from you soon

Former policeman James Wiggins also weighed in in support of Ginny Pender/Jenny Robbins’ claim for custody of her children. (The date of his letter is puzzling, as it more than a year and a half before Robbins’ above. It gives a sense, however, of the protracted fight Toney and Jenny Robbins waged for her grandchildren.) 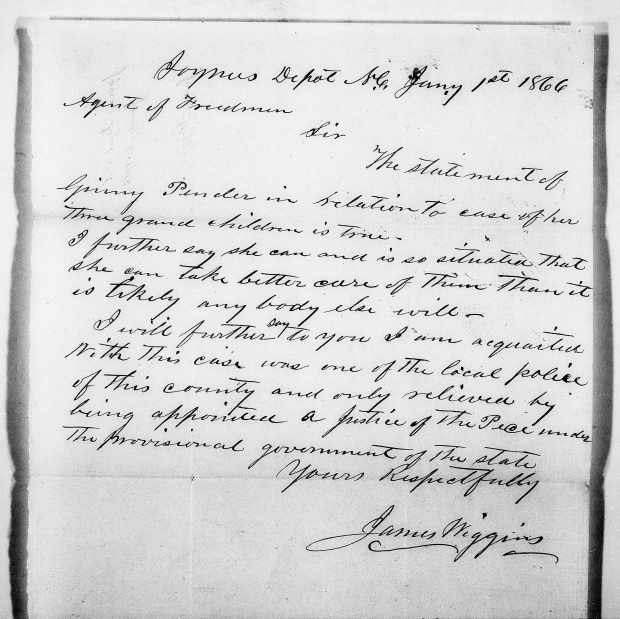 In August 1867, John J. Pender complained to the Freedmen’s Bureau that Toney Robbins was harassing him about Pender’s apprenticeship of three children who Robbins claimed were his grandchildren. Pender asserted that Robbins had no children, much less grandchildren. The Bureau apparently sided with Pender, as the children were with him in 1870 when the census taker passed through.

Here is one of Robbins’ letters pleading for the Bureau to intercede on his behalf. 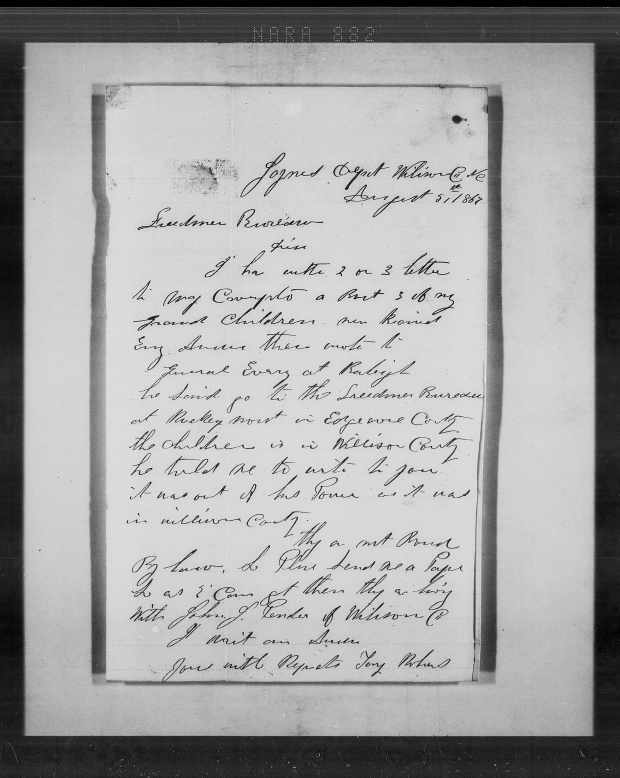 Thy or not Bound By law, So Plese Send me a Paper So as I can get them thy ar living With John J. Pender of Wilison Co

I wait an Anser [illegible] with Respets Tony Robins 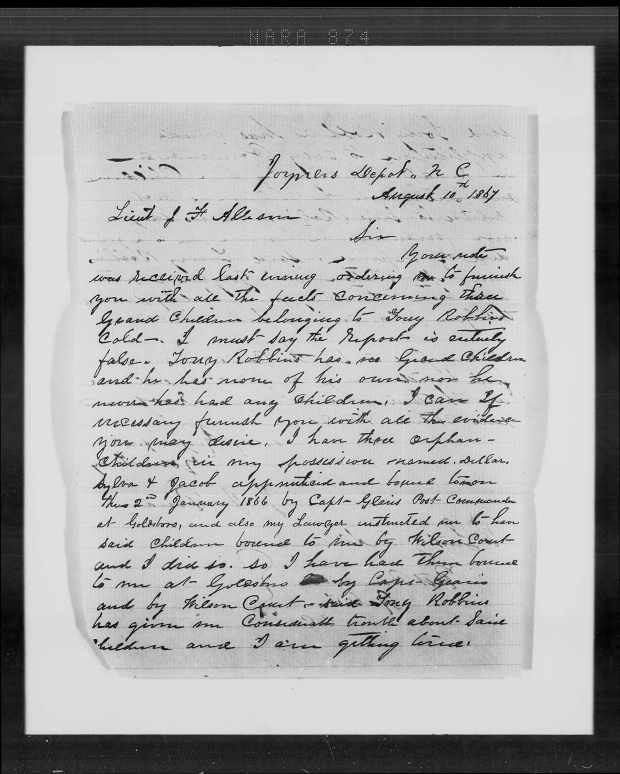 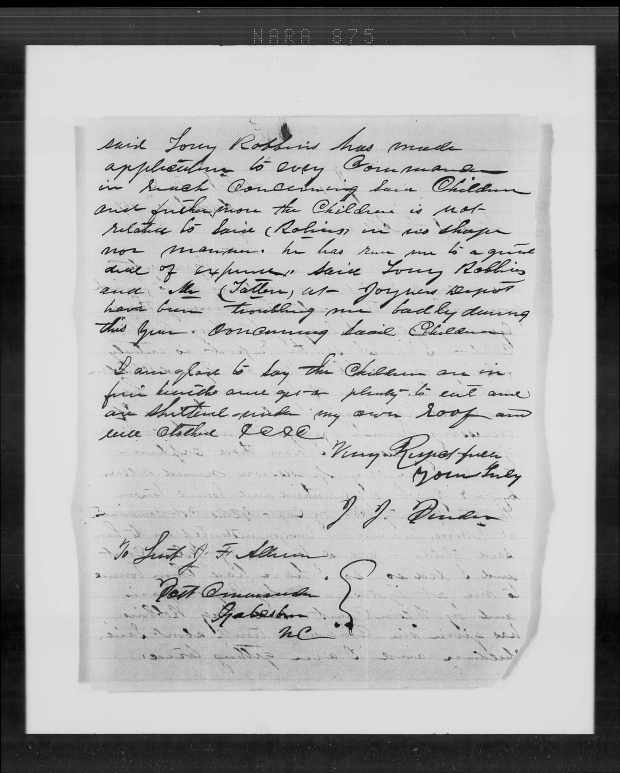 Your note was received last evening ordering me to furnish you with all the facts concerning three grand children belonging to Tony Robbins cold [colored]. I must say the report is entirely false. Tony Robbins has no grand children and he had none of his own nor he never has had any children. I can if necessary furnish you with all the evidence you may desire. I have three orphan children in my possession named Dellar, Sylva & Jacob apprenticed and bound to me on the 2nd January 1866 by Capt Glavis post Commander at Goldsboro, and also my Lawyer instructed me to have said children bound to me by Wilson Court and I did so. So have had them bound to me at Goldsboro by Capt Glavis and by Wilson County. Said Tony Robbins has given me considerable trouble abot said children and I am getting tired. Said Tony Robins has made application to every Commander in reach concerning Said Children and further more the Children is not related to Said (Robins) in no shape nor manner. He has run me to a great deal of expense. Said Tony Rbbins and Mr (Totten) at Joyners Dept have been troubling me badly during this year Concerning said Children

I am glad to Say the Children are in fine health and get a plenty to eat and are sheltered under my own roof and well clothed &c &c.

On 18 April 1878, Haywood Braswell, 23, married Sylva Pender, 19, in Township No. 14, Edgecombe County, in the presence of Toney Robbins, Charles Daws and Tom Petway.

Sylvia Pender Braswell died 12 April 1952 at her home at 510 South Spring Street, Wilson. Per her death certificate, she was born 3 January 1842 [sic] in North Carolina to unknown parents and was a widow. Connie Bynum was informant.

Another blind tiger makes the news: