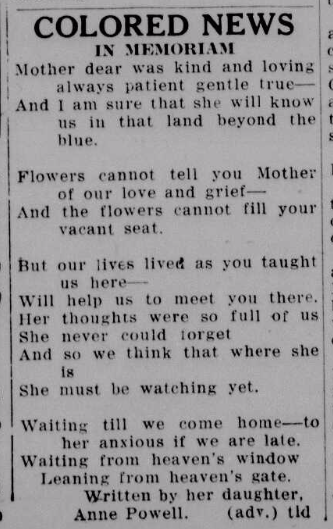 I have not been able to identify Anne Powell or her mother.

The school year was 180 days long and ran from 5 September 1940 to 27 May 1941. (Compare Elm City Colored School, and Williamson High School, rural schools that only had 120-day terms.) Thirteen teachers taught at Darden — seven women and six men. These thirteen taught 331 children — 119 boys and 212 girls — in grades eight through eleven. All grades, including elementary, were housed in one building, which had restrooms, a principal’s office, a library, an auditorium, and a lunchroom.

All the teachers were college graduates, and most had significant experience.

The school had no dedicated science laboratory space, but did have lab equipment, and had numerous maps and globes. It published a newspaper, The Trojan Journal, and sponsored boys and girls glee clubs, a Verse Choir, and student patrol.

The school graduated 27 students in the Class of 1941. 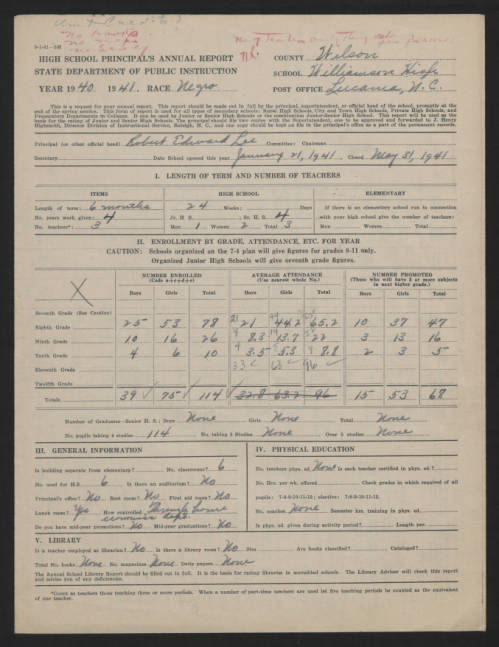 The school year was only 120 days long and ran from 21 January 1941 to 31 May 1941. (Compare Elm City Colored School, which ran from February to June. Darden, on the other hand, had a 180-day school year.) Three teachers taught at Williamson — two women and one man. Astonishingly, these three taught 114 children — 39 boys and 75 girls — in three grades. (The school had no 11th or 12th grades.) Six-room Williamson Colored School housed all grades in one building. It had no restrooms, principal’s office, library, or auditorium. It did have a lunchroom run by the home economics department.

All the teachers were college graduates. Each was in his or her first year teaching at Williamson.

The school had no laboratories or maps. It published a newspaper, The Oracle, and sponsored an English Club. Lee made this note: “Our Agriculture, Home Economics and guidance programs will begin in September, 1941, as steps are already being taken to put them into effect.”

High school principals were required to file annual reports with the North Carolina State Department of Public Instruction. In 1941, Robert A. Johnson filed this report for Elm City Colored School for the preceding school year.

The school year was only 120 days and ran from 10 February 1941 to 28 June 1941. Seven teachers taught at Elm City — two men and five women. They taught 164 children — 48 boys and 116 girls. Elm City Colored School housed all grades in one building. It had no restrooms, lunchroom or auditorium. It had no librarian, but it did have a library room.

All the teachers were college graduates. Barnes had the most tenure at Elm City, with 8 years; Brewington and Burnett were newcomers.

From the 1949 edition of The Bear, the yearbook of Shaw University, Raleigh, North Carolina:

In the 1900 census of Wilson, Wilson County: cook Nannie Best, 34, widow, and daughters Francis, 20, and Eliza, 16, and boarder Lula Garrett, 25. The latter three were house servants.

Frankye Best died 23 June 1941 at her home at 1009 East Nash Street, Wilson. Per her death certificate, she was 58 years old; was born in Lenoir County, N.C., to Aaron Best and Nannie Best; was single; and was buried in Rountree cemetery. Eliza Best was informant.

In the fall of 1944, Darden High School’s football team, finding no teachers available to fill the role, coached itself.

(Note the reference to the team’s playing field. Darden had no formal football field, and the team had to spend its own money to rent Fleming Stadium for home games.)

Here, East Wilson more or less entirely. (The dark curve superimposed on the image marks the future path of Ward Boulevard. Though this road was plotted largely through open land, it did require the obliteration of a stretch of houses on East Nash Street.)

Below, a close-up look at the bottom left quadrant of this image. South of Nash Street, the road now known as Pender Street was then called Stantonsburg Street. At (1), the Sallie Barbour School, formerly known as the Colored Graded or Stantonsburg Street School. At (2), a tightly packed block of endway (shotgun) houses, which were form of choice for developers of rental housing for Wilson’s African-American working poor. Clusters of these narrow dwellings can be seen across the map. This block, on Railroad Street between Elvie and Lincoln Streets, is still intact.

Around Cemetery Street, the open space attests to the location of Wilson’s earliest Black cemetery (cemeteries?). The following year, the city disinterred Oakdale cemetery and moved its graves to Rest Haven.

The elbow of Lane Street, below. The Harry Clark family farm, later Rest Haven cemetery, at (1), and a relatively clear view of (2) Vick, (3) Odd Fellows, and (4) Rountree cemeteries.

The occupation and industry columns in federal population schedules sometimes yield unusual results, even in an era in which most African-Americans in Wilson worked as farm laborers, tobacco factory hands, or domestic workers.

In the 1940 census of Wilson, Wilson County, 48 year-old Deal Tillman gave his occupation as:

Tillman spent much of his life in Randolph County and only lived a few years in Wilson.

In 1917, Dealie Tillman registered for the World War II draft in Randolph County, N.C. Per his registration card, he was born 12 July 1892 in Trinity, N.C.; resided in Trinity; worked as “keeper of kennel” for Dr. P.P. Satterwhite, Trinity; had a wife and two children; and “claims right leg stiff from fracture; thumb on left hand disabled.” [Dr. Preston P. Satterwhite was a Kentucky-born retired surgeon and art collector with homes in Palm Beach and New York City. His marriage to Florence Brokaw Martin, widow of a Standard Oil executive (and herself an heiress) allowed him to retire from the practice of medicine early. I have found no record of Satterwhite’s maintenance of a residence (or kennels) in North Carolina, but, per the Asheboro Courier, Florence Satterwhite’s brother, socialite W. Gould Brokaw, owned an estate with a kennel, called Fairview, near Trinity The kennel was just one of many in the county catering to well-heeled Northerners game for hunting.]

Deal Tilghman died 29 December 1941 at his home at 204 Powell Street, Wilson. Per his death certificate, he was born 25 July 1892 in High Point, N.C.; was married to Julia Tilghman; and worked as a laborer. He was buried in Rest Haven cemetery.

Julia Tilman died 19 December 1945 in Raeford, Hoke County, N.C. Per her death certificate, she was born 4 July 1891 in Red Springs, N.C. to Archa and Nerva Melvin; was the widow of Deal Tilman; and was a teacher. Bertha Smith, Raeford, was informant.