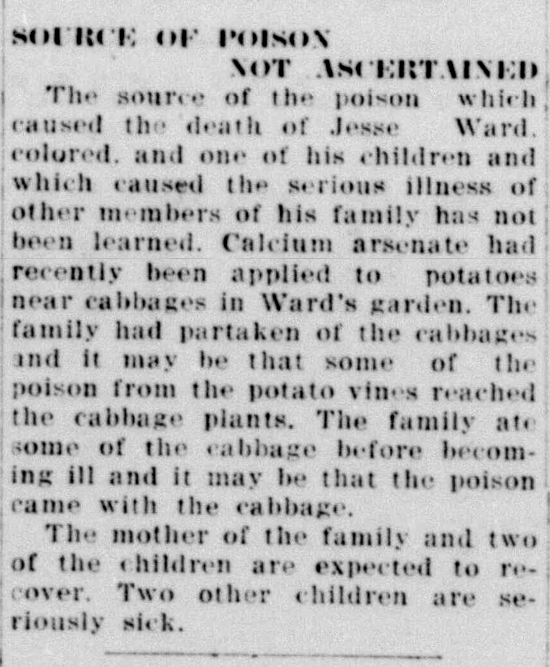 The occupation and industry columns in federal population schedules sometimes yield unusual results, even in an era in which most African-Americans in Wilson worked as farm laborers, tobacco factory hands, or domestic workers.

In the 1930 census, 22 year-old Alfonso Ward gave his occupation as:

I have not been able to find any additional information on Ward’s career as a roadshow comedian, though he likely played chitlin’ circuit venues.

In 1940, Alfonso Ward registered for the World War II draft in Kings County, New York. Per his draft card, he was born 1 May 1908 in Wilson, N.C.; lived at 3040 B 7th Street, [Brooklyn], Kings County; his contact was friend Flossie Barrington, 614 Ocean View Avenue; and he worked for Louis Super, 419 B[righton] B[each] Avenue, Kings County. Ward’s address was amended to 413 Bri[ghton] Beach Ave. on 15 February 1943. [Per his signature, Ward spelled his first name “Alfonza.”]

In November 1877, steward Lawrence Ward, acting on behalf of Bethel A.M.E. [Zion] Church, purchased the acre of land on which its church stood on the road leading from Stantonsburg to Contentnea Creek near Ruffin’s Bridge. The church is now located about a mile north of Stantonsburg, but its cemetery remains on the original acre. Ruffin’s Bridge was originally known as Peacock’s Bridge, and Peacock’s Bridge Road runs east of present-day NC Highway 58.

State of North Carolina, Wilson County } This deed made this the 16th day of November 1877 by F.M. Moye of Wilson County and State of North Carolina to Lawrence Ward of said County & State holding the office of Steward in the A.M.E. church known as Bethel Witnesseth that the said F.M. Moye in consideration of Twenty Five Dollars to him paid by the said Lawrence Ward as the representative of said church the receipt of which is hereby acknowledged have bargained & sold by these presents do bargain & sell & convey to the said Lawrence Ward and his successors in office for the benefit & use of said Church a certain lot of land in said county, it being the land on which the building of the said church is situated on the North side of Big Contentnea creek near Ruffins bridge and on the east side of the road leading to said Bridge and is a part of the tract of land Known as the Davis land containing one acre To have and to hold the aforesaid lot of and all privileges thereto belonging to the said Lawrence Ward and his successors in office for the benefit & use of said church And the said F.M. Moye covenant that he is seized of said lot of land in fee and has the right to convey the same in fee simple and that he will warrant & defend the said title to the same against the claims of all persons whatsoever In testimony whereof the said F.M. Moye have hereunto set his hand & seal the say & year above written  /s/ F.M. Moye   Attest J.K. Peacock, J.S. Ellis

In the 1880 census of Stantonsburg township, Wilson County: farmer Lawrence Ward, 38; wife Mary, 29; daughter Mary, 14; mother Sophia, 58; and farm worker Henry Lane, 12. [Their proximity in 1870 and 1880 to the house and plantation of Dr. David G.W. Ward suggests that Lawrence and Sophia Ward had been owned by the doctor in slavery.]

Lawrence Ward died 29 August 1918 in Wilson. Per his death certificate, he was born in 1831  in Wilson County to Sophia Ward; was married; was a retired farmer; and was buried in Wayne County.

The Netflix limited series Self Made is refocusing attention on Madam C.J. Walker, the millionaire entrepreneur and empowerer of women best known for her haircare empire. The series is honest about being more “inspired by” Madam Walker’s life than true to it. Chockablock with B-list black star power (plus Octavia Spencer), Self Made is entertaining if you don’t think about it too hard. Ultimately, however, its heavy-handed resort to tropes and types and its soap opera style do a disservice to her story. Anyone wanting a closer truth should turn to A’Lelia Bundles’ On Her Own Ground, or my fave, Beverly Lowry’s Her Dream of Dreams: The Rise and Triumph of Madam C.J. Walker. Among other things, you’ll find an important part of Walker’s story completely omitted from Self-Made — her relationship with Dr. Joseph H. Ward, an African-American physician born in Wilson about 1872.

When she first arrived in Indianapolis in 1910, Walker boarded with Joseph and Zella Locklear Ward and gave beauty culture demonstrations in their parlor.

Walker and her daughter Lelia Robinson grew close to the Wards, and Dr. Ward was Madam’s personal physician the remainder of her life. He was at her bedside when she died.

The Wards accompanied Madam Walker on a drive to Kansas City, Missouri, where she addressed the National Educational Congress on “How the Negro Woman May Success in Business.” Indianapolis Star, 13 July 1913.

On a drive from Saint Louis to Kansas City, the automobile in which the Wards and Walker were traveling was jumped by a wild animal. Indianapolis Star, 28 September 1913.

Also in 1913, on the steps of the newly dedicated Y.M.C.A., Madam Walker with Booker T. Washington and, behind them, her lawyer Freeman Ransom and Dr. Joseph H. Ward.

From Lowry’s Her Dream of Dreams:

“By Friday, Ward informs the household that Madame Walker cannot last longer than Sunday. On Saturday night, about midnight, she slips into unconsciousness. And her faithful friends and doctors and family gather around her bed; they are religious people who also believe in love and company, and that no one should pass from this life into the next alone. And so they wait, hushed, whispering, watching her, waiting.

“Sunday dawns warms and clear, and early rays of the sun crack through the drawn damask curtains and perhaps fall in splinters across the rose silk coverlet on Madame’s bed. At seven o’clock her people are still there, but no one feels her go and no one knows when she dies until Ward turns and says, ‘It’s over.’

“And if they weep it is with relief, for the end of her suffering. Her dying words, Ward later reports, were ‘I want to live to help my race.'” 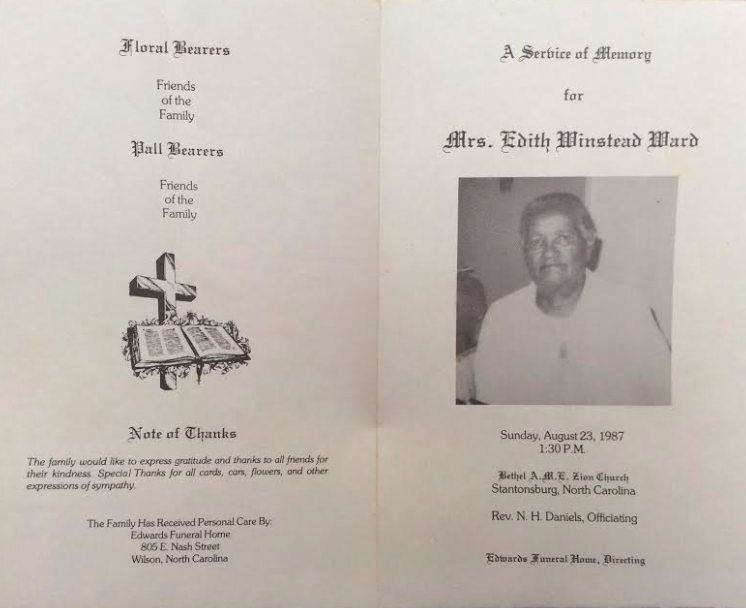 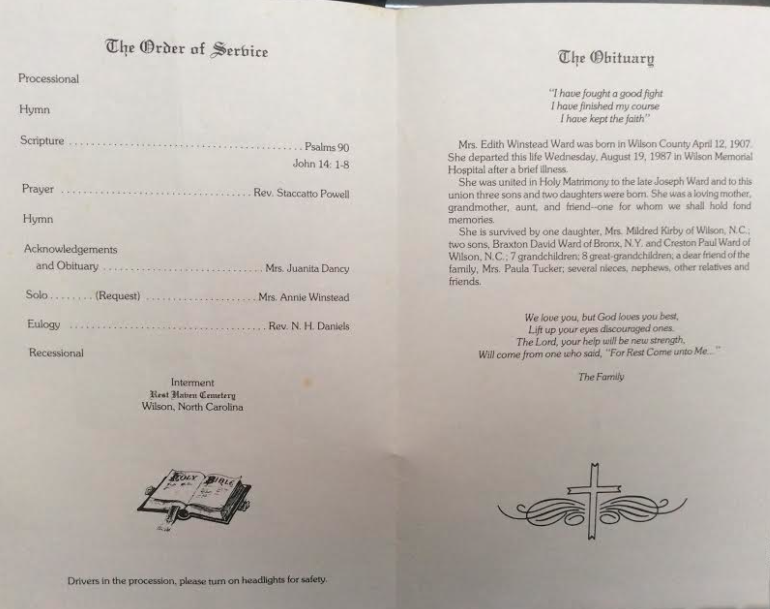 James Herman Ward died 25 August 1928 in Stantonsburg township, Wilson County. Per his death certificate, he was born 15 June 1927 in Wilson County to Joe Ward of Greene County and Edith Winstead or Wilson County. he was buried in Bethel graveyard.

Amanda Williams died 24 December 1955 in Stantonsburg township, Wilson County. Per her death certificate, she was born 3 May 1883 in Pitt County to Isaac Winstead and Jane Winstead and was a widow. Informant was Edith Ward, Stantonsburg.

Joseph Ward died 19 September 1971 in Wilson. Per his death certificate, he was born 5 May 1896 to Perry Ward and Cherry Speight; was married to Edith Ward; lived at 919 Poplar Street, Wilson; and his informant was Mildred Kirby, 125 Powell Street, Wilson. 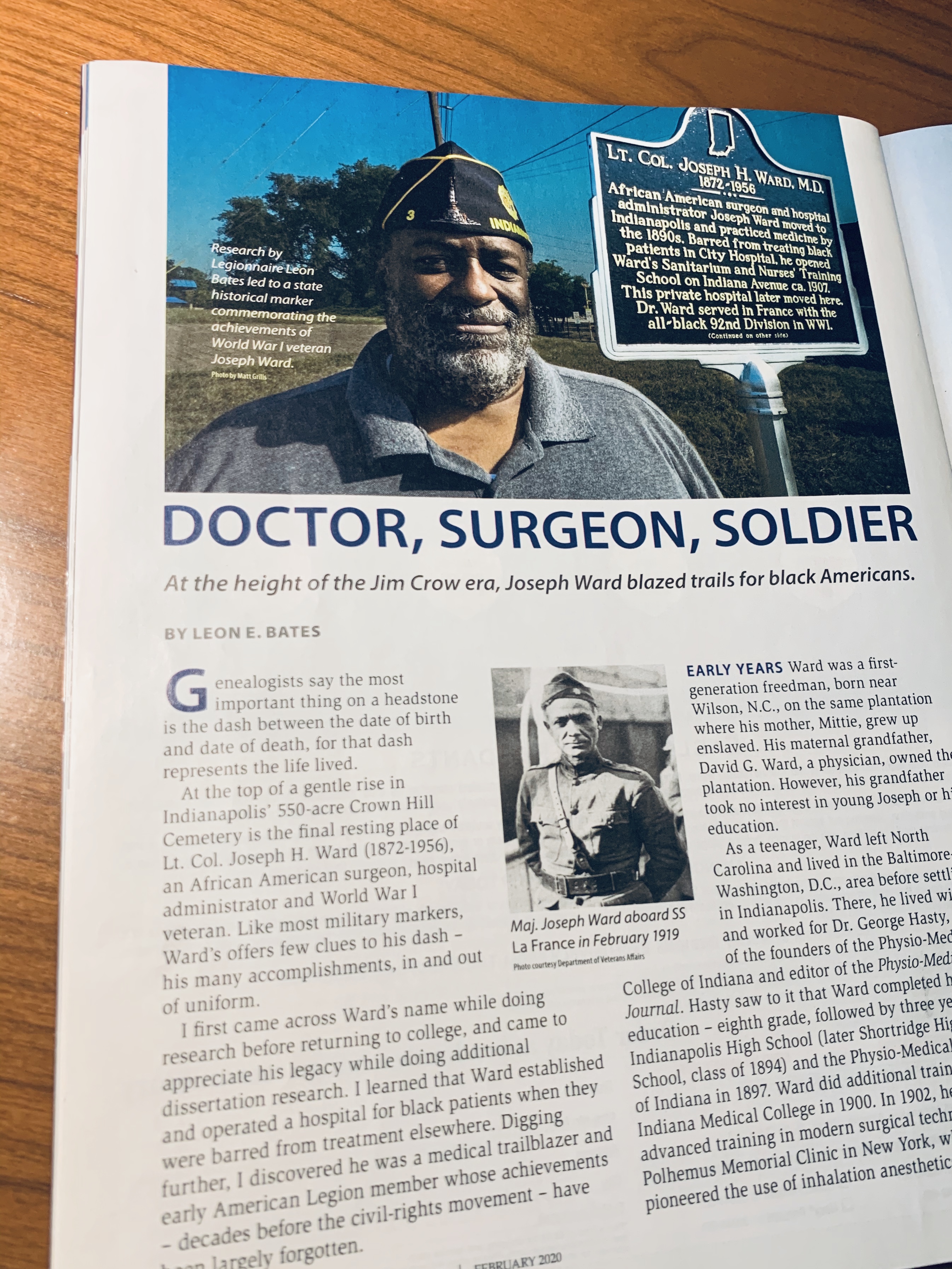 In 1918, Frank Ward registered for the World War I draft in Wilson County. Per his registration card, he was born in March 1884, worked on Henry Love’s farm, and his nearest relative was Minnie Ward.

In 1940, Columbus Ward registered for the World War II draft in Wilson County. Per his registration card, he was born 15 October 1909 in Wilson County; he lived at 808 Sugg Street; his contact was father Frank Ward; and he worked for C. Woodard.

Frank Ward died 1 January 1941 in Wilson. Per his death certificate, he was born 10 September 1884 in Wilson County to Frank Ward and Rosa Ward; worked as a laborer for the  city of Wilson; and he lived at 808 Suggs Street. He was buried in Rest Haven cemetery. Minnie Ward was informant. Ward’s cause of death was “fractured skull/falling from truck.” (Ward was declared dead at Woodard-Herring Hospital, which ordinarily treated whites only.)

The one hundred-twentieth in a series of posts highlighting buildings in East Wilson Historic District, a national historic district located in Wilson, North Carolina. As originally approved, the district encompasses 858 contributing buildings and two contributing structures in a historically African-American section of Wilson. (A significant number have since been lost.) The district was developed between about 1890 to 1940 and includes notable examples of Queen Anne, Bungalow/American Craftsman, and Shotgun-style architecture. It was listed on the National Register of Historic Places in 1988. 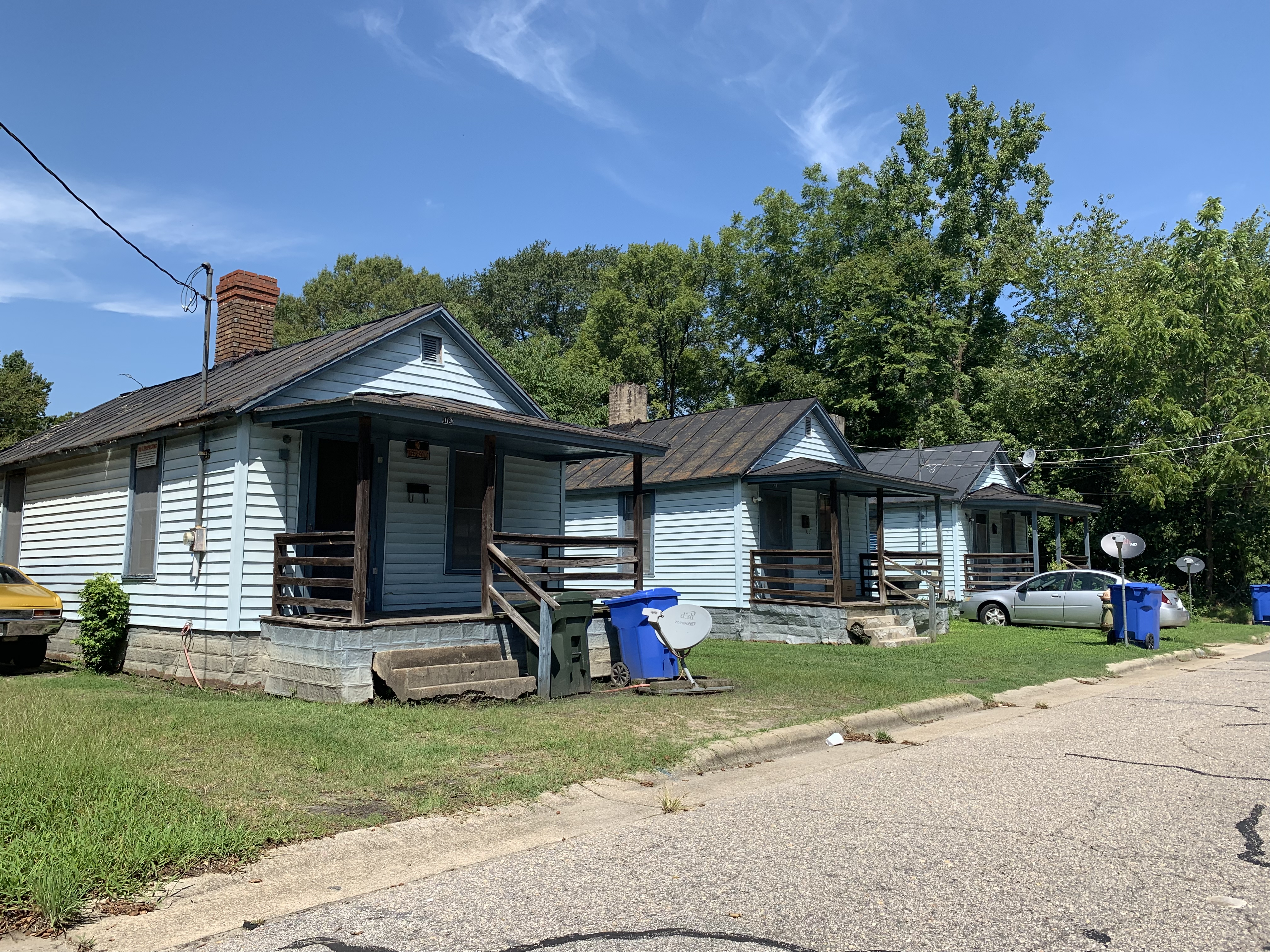 As described in the nomination form for the East Wilson Historic District, the houses at #113, #115, #117 are: “ca. 1908; 1 story; shotgun with board-and-batten veneer.” The board-and-batten has been replaced with clapboard.

The 1913 Sanborn fire insurance map of Wilson shows that there were originally six endway houses (with two different floor plans) on this stretch of North East Street. Street numbering changed about 1922, so the houses above were originally #114, #116 and #118. 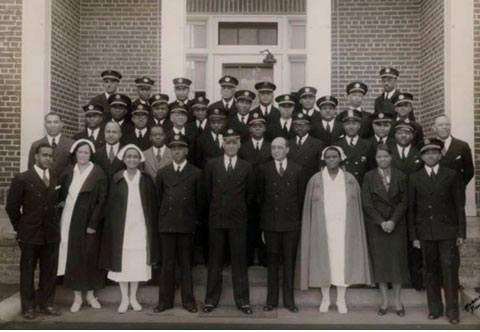 Dr. Ward is on the front row, center (next to the nurse) in this 1933 photograph of Veterans Hospital staff.  Photo courtesy of VA History Highlights, “First African American Hospital Director in VA History,” U.S. Department of Veterans Affairs.

[Sidenote: Dr. Ward was not born to “impoverished parents” per the article, though it is possible that he himself gave this gloss on his early life. Rather, his father was Napoleon Hagans, a prosperous freeborn farmer in nearby Wayne County, and his mother was Mittie Ward, a young freedwoman whose family moved into town after Emancipation from the plantation of Dr. David G.W. Ward near Stantonsburg.]

Hat tip to Zella Palmer for pointing me to this article. She is Dr. Ward’s great-granddaughter, and they are my cousins.