As noted here, I have long been intrigued by the disappearance (in space and memory) of Wilson’s first African-American cemetery, sometimes called Oaklawn or Oakland or Oakdale. The precise location of the first city-owned black cemetery is a mystery, though most people believe (and as I conjectured here) it was above Cemetery Street where Whitfield Homes are now situated.

No official records related to the cemetery survive, and no plat map delineates its complete boundaries. However, I’ve found one reference to the “colored cemetery” on a 1923 plat map of “The D.C. Sugg Property Located on Stantonsburg Road and Lincoln Avenue.”  Using a 1937 aerial photograph of the area (the graves in the cemetery were disinterred in the early 1940s), plus the plat, I’ve come up with a revised location estimate.

Wilson disinterred the (known) graves at Oakdale in 1941. Accordingly, I searched the 1937 aerial photograph of this area, below. The street at left is Railroad Street. Manchester Street is at far right, and parallel to it was then Stantonsburg Street. (North of Cemetery, it is now Pender Street. The lower section is now Black Creek Road.)The red-dashed lines mark current streets, including Pender, New, Nora, and Blount. The blue-dashed line is Nora St. as it appears on the 1923 plat map above. The green marks the borders of the colored cemetery above. (I have added a northern border though none is shown on the plat map.)

If my mark-up is correct, the cemetery (or, at least, its southern extension) was south of Cemetery Street near the site now occupied by Daniels Learning Center (the former Elvie Street School.)

I ran the mark-up by Will Corbett, GIS Coordinator, Wilson County Technology Services Department, for an opinion on my conjecture. He agreed and returned this graphic:

Bingo. The blue-shaded area is the “colored cemetery” overlaid on a current map of the neighborhood. This image reveals that the cemetery covered what is now a row of houses fronting on New Street, as well nearly the entirety of the lawn and semi-circular driveway in front of Daniels/Elvie school.

Was this cemetery marked on Sanborn fire insurance maps? It is not on the 1922 map, the last one for which I have access. The maps corresponding to the sections marked 25 and 29 show houses along Railroad, Suggs and Stantonsburg Streets, and a few along the north side of East Contentnea (now Cemetery) Street. However, south of East Contentnea, the space is blank but for subsection numbers 225 and 256, and no corresponding maps were made. Though it is not marked, Oakdale cemetery was located in this space.

With the information above, I revisited a plat map the city filed in 1942. I initially had difficulty interpreting “The Town of Wilson Property on Cemetery Street,” but I now see it is oriented south to north. Turn it upside down, and the outline of the old colored cemetery clearly emerges. As I suspected, the city had owned the section between present-day New and Cemetery Streets as well as the inverted L below New, and it is likely that there were also burials in this space. 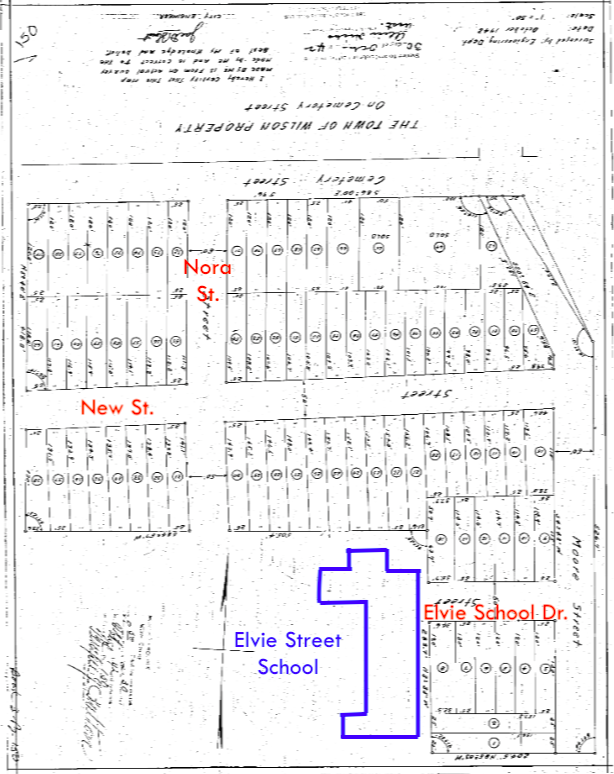 From the website of the Wilson County GIS/Mapping Office, a map showing the flood plain of Sandy Creek. As is obvious from the drifts of trash littering the low-lying rear of Rountree cemetery, much of this graveyard is regularly underwater. The same holds for the southeast quadrant of Odd Fellows cemetery and nearly all of the section of Rountree across Lane Street. 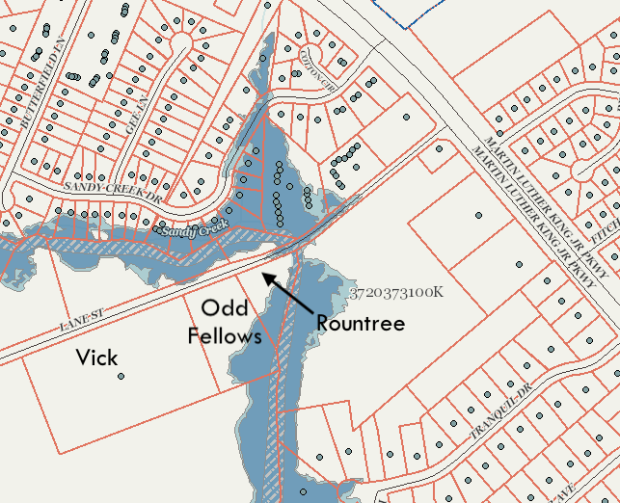