In 1984, a preservation consultant prepared a Nomination Form for recognition as a National Historic District for “Wilson Central Business District – Tobacco Warehouse Historic District,” a thirty-six-block area at “the commercial and industrial heart of Wilson.” This area included the stretch of Nash Street east of the the railroad, Wide Awake’s black business district, and the nomination  form has preserved forgotten details of the architecture and history of these blocks, part of which underwent dramatic, transformative loss a few years after the report was created.

Excerpted below are details of buildings in blocks of Barnes and Pender Streets that lie adjacent to the main corridor of Nash Street, with recent photographs of the buildings described. (The entries are presented as original with minor typographical corrections and just a few fact corrections, noted in brackets.)

The Wilson Missionary Baptist Church was founded in 1872 and had by 1880 erected a small frame church at this site. That congregation, now known as the Jackson Chapel First Missionary Baptist Church, was a leader in the black community and in 1913 erected their current Romanesque Revival style church nearby at the corner of North Pender and East Nash Streets (#275). In 1915 the old frame church was sold to the Wilson Chapel Free Will Baptist Church. It was replaced in 1958 by this present building, a gable front, three bay by six bay brick structure that contains triangular pointed windows and a crenellated, partially-inset tower, all of which are faintly reminiscent of the Gothic Revival style. The site has played a significant role in the religious life of East Wilson for over one hundred years.

This modest, turn of the century, two bay-by-two bay, frame dwelling is sheltered beneath a hipped roof of standing seam metal that is pierced by a brick chimney. Occupied by black renters since its construction, the house has four-over-four sash windows and a two-bay front porch carried on plain posts. It and a similarly modest dwelling at 123 North Pender Street were acquired in 1976 by the adjacent St. John’s African Methodist Epsicopal Zion Church for future expansion. The house at 123 was razed in November 1983; the church has plans to raze this one also.

One of the earliest black congregations in Wilson, the St. John’s African Methodist Epsicopal Zion Church was deeded this property in 1880 by prominent white businessman E.D. Nadal (1843-1896). A frame church of which there is scant information, was erected on the site soon thereafter. This frame church was razed in 1914 to make way for this impressive and imposing Gothic Revival edifice, which was erected in 1915 by talented Wilson brickmason John Barnes, who was a brother-in-law [sic; son-in-law] of Charles H. Darden (1845-1931). Darden was one of the leaders in Wilson’s black community, the first black undertaker in North Carolina, and a member of this congregation. While the architect is unknown, there is no reason to believe that the church may be the work of Charles C. Benton (1887-1960), who designed several buildings for the Darden family. Dominating the large brick church is the three-story square tower which has corner buttresses, Gothic arched windows, projecting stone rainspouts, a louvered and arched belfry with limestone trim, and stone finials, crosses and caps at the top. Molded stone Gothic arches that rest on clustered stone columns are used prominently in the arcade that shelters the recessed entrance on the Pender Street (southeast) facade. The truncated hip roof (slate covered) has prominent gables on the sides, each containing an arched window with a wide, stone surround. Square, one and-a-half story towers with crenellated tops mark the east and west corners; the east tower is augmented by a marvelous octagonal minaret with a bell cast roof. The handsomely finished interior focuses upon the recessed central dome which is carried by arches springing from the four corners of the sanctuary. This dome, like all of this church’s windows, has its original stained art glass windows. The altar in the east corner is flanked on the northwest by the recessed choir and on the northeast by the adjoining church school rooms. A spacious balcony, accessible by stairs in the corner towers, extends across the two street elevations. The interior’s woodwork retains its lustrous dark finish. A modern Sunday School wing was added on the rear in the 1960s. The church was designated by the City Council on February 16, 1981, as a Wilson Historic Property.

The adjacent, two-story, three-bay-by-four-bay brick parsonage, built soon after the church, continues the Gothic character of the church in its Gothic arched and recessed entrance. These arches are framed by wide, bold stuccoed surrounds and rise from round piers. However, the rest of the parsonage is Colonial Revival in style. The parsonage has a low, pyramidal roof supported by shallow brackets beneath the eaves. Nine-over-nine sash windows brick sills and solider course lintels. The recessed porch has two entrances, the southwest one leading to the pastor’s study and the northeast one providing access to the living quarters. The interior is plastered and simply finished. 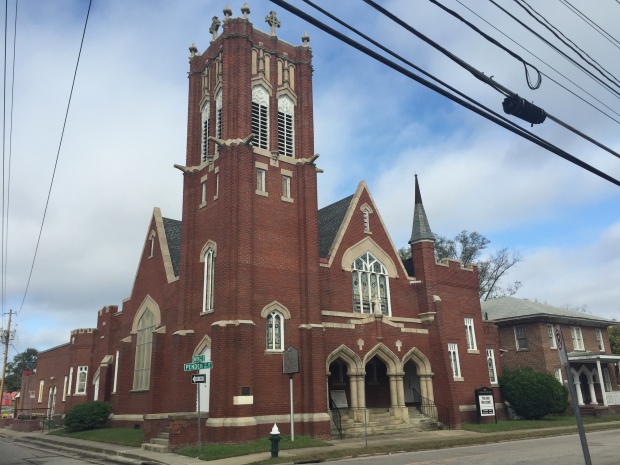 The Mount Hebron Masonic Lodge #42, the oldest black fraternal organization in Wilson, was chartered on December 15, 1881. G.A. Farmer, Alfred Robinson, I.H. Harris, J.W. Hood and Joseph Hill, all prominent leaders in Wilson’s small, but growing, black community, were the first officers. The craft met in various churches until 1896 when this lot at the corner of North Pender and Smith Streets was purchased from the St. John’s African Methodist Episcopal Zion Church and a small, two-story frame lodge hall was built here. (The impressive 1915 Gothic Revival edifice of St. John’s stands across Smith Street from the lodge.) This building was occupied by the craft for over 40 years until it deteriorated and was replaced in 1947 by the present plainly finished, two-story, two-bay-by-five-bay, concrete block building. It was erected by prominent Wilson bricklayer B. Frank Barnes according to the marble cornerstone; Barnes was a lodge member. The facade contains two (rental) storefronts with recessed central entrances; number 117 has suffered major alterations while the 115 storefront is basically intact. The second story contains paired six-over-six sash windows flanking a central inset marble tablet bearing the masonic emblem. The stepped parapet has tile caps. The side and rear elevations contain an irregular arrangement of doors of small raised windows on the first story and single six-over-six sash windows on the second story. The interior was entirely remodeled in 1960. The lodge rooms are on the second story. The 155 [sic; 115] store was occupied by the Wilson County Negro Library from 1947 until ca 1974, when the library moved to 208 South Pender Street and the name was changed to the East Branch of the Wilson County Library. Since then it has been occupied by the Squire Club (social club) of the lodge. The 117 store was first occupied by lodge member Linwood Moore as a grocery until 1950 and from 1950 until ca 1980 it was operated as the Stop Light Grill by James Morrison, also a lodge member. It is presently vacant. The membership of the Mount Hebron Lodge has included, since its organization, most of the leaders in Wilson’s active black community. During the late nineteenth and early twentieth centuries its members also included all of the members of the Red Hot Hose and Reel Company Volunteer Fire Company, a black fire department which assisted the City of Wilson’s fire department; the company is still in existence, but hasn’t actively fought fires for many years. With a present membership of about 140, the Mount Hebron Lodge is one of the largest and most active black masonic lodges in eastern North Carolina. 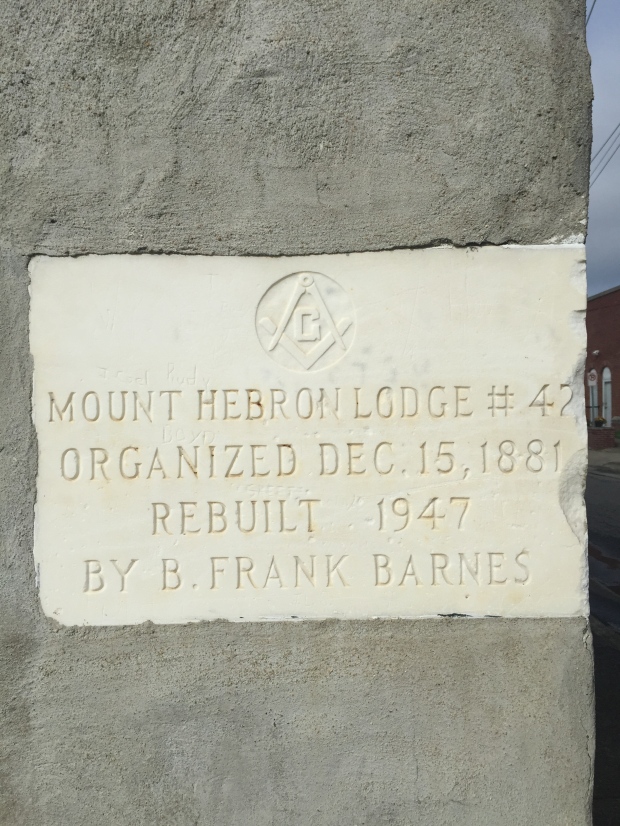 In 1872, a congregation of black Christians, under the leadership of Rev. Andrew Jackson, established a Missionary Baptist church in Wilson; the present name of the church serves as a memorial to its founder. The congregation first met in a downtown building, but by 1880 had raised enough money to erect a small wooden church at 513 East Barnes Street. The church enjoyed a steady growth and became a strong and influential element in Wilson’s black community, leading to the initiation in 1905 of a drive for a larger sanctuary. In the 1906 of the present lot was deeded to the church by Samuel H. Vick (1861-1946) [sic; 1863-1946], a prominent educator, former postmaster, and a leader of educational, cultural and business causes in the black community of Wilson. The trustees of the Jackson’s Chapel Missionary Baptist Church at that time were Parker Battle, George W. Woodard, S.D. Henderson, and Walter Foster, each a prominent citizen of Wilson’s progressive black community. Led by their minister, the Rev. M.A. Tally, and several members who mortgaged their personal property, by 1913 the congregation was able to hold a cornerstone ceremony which Booker T. Washington is said to have attended. [Washington in fact attended a 1910 ceremony.] In 1915 the original church was sold to Wilson Chapel Free Will Baptist Church, who altered the building and eventually replaced it. However, a church continues to exist at the site at 513 East Barnes Street, one block south of this sanctuary.

Erected in 1913 in a boldly Romanesque form (architect and builder unknown) at the corner of East Nash and North Pender Streets, the Jackson Chapel First Missionary Baptist Church, with its tall, three-story corner belltower, is a visual landmark in East Wilson (the traditional black community), especially when approaching from the east. Constructed of red brick and covered with a hipped roof with wide, open eaves under which is a corbeled and arched cornice panel, the church focuses upon the three-story tower at the south corner (corner of East Nash and North Pender Street). Crowned by a bellcast pyramidal roof with finial and support[ed] by curved brackets, the tower is pierced at all levels by rounded openings, with those on the first floor at Pender Street containing the door. Three smaller ones on the Nash Street side illuminate the interior stairwell. The elongated openings on the third level are subdivided by columns into three round-headed arches and contain the bell. A similar, but shortened, tower is at the west corner. The southeast facade (North Pender Street) contains one large, roundheaded, three-part window flanked on each side by similar, two part windows. The East Nash Street elevation contains two tiers of paired one-over-one windows, each surmounted by a round fanlight; the central window on the first floor has been enlarged to make an entrance and the flanking windows have been bricked in. A rose window occupies the top of the East Nash Street gable.

The handsome interior is plastered and has a sloping floor and curved pews which focus on the recessed chancel in the northeast elevation. The ceiling is a coved cross vault, from a central, ornate metal rosette hand and octagonal lantern. The walls of the chancel area are finished in a pseudo half-timber fashion.  The baptistry is recessed into the upper chancel wall. A U-shaped balcony extends along each side and curves at the rear. It is supported by Tuscan columns and the balcony’s fascia treated like an entablature; a brass railing is on top. The balcony is reached by four separate flights of stairs, one in each of the towers and one at the front of each wing of the balcony. Behind the altar are the choir rooms, the parson’s study and Sunday school rooms. Additional Sunday school rooms and a large meeting room are found in the basement. The Jackson Chapel First Baptist Church was designated a Wilson Historic Property by the City Council on March 21, 1979.