This excerpt from a news account of a commissioners’ meeting caught my eye. Barber Noah Tate‘s application for a pool room license was denied, and Alderman Lewis cried discrimination. What kind of discrimination was being decried by an elected official in Wilson in 1919? 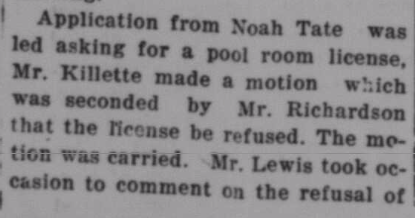 An article published nearly eighteen months before yields context. On 7 May 1918, the Times reported, “The city fathers last night refused to renew the license to the pool rooms and to the bowling alleys of the city, and the remarks regarding the places where cider is sold were also far from complimentary. … The meeting was opened by the reading of a resolution by … business men setting forth the fact that both white and colored frequent these places and thus remove from the busy marts of trade and industry labor that should be employed in producing something other than thriftless habits and viciousness.” Mayor Killette railed against the shiftless and bemoaned the legal victory that allowed a local man to sell cider made from his own apples. “The gist of the argument [against pool rooms] was that the colored pool room was full of men who should be at work producing something for their families and helping to make something rather than being consumers merely and drones upon the body politic. They were corrupting because it was almost impossible to prevent gambling in these places and in addition to shiftlessness it encouraged vice and vagrancy. A number of employers stated that their help could be found in the pool room below the railroad, and the bowling alley came in for equally critical remarks as a place to encourage loafing and bad habits.” The matter was put to vote, and no’s were unanimous. [The “colored pool room,” by the way, may have been Mack Bullock‘s establishment at 417 East Nash. See Sanborn map detail, below.]

In June 1919, Luther A. Barnes, the white proprietor of a pool hall at the New Briggs Hotel, and the subject of intense criticism during the May debate received his license over the objection of the mayor. Perhaps this turn of events sparked Commissioner Lewis’ objection to Tate’s rejection three months later?

Noah Tate finally got his pool room in 1921.

“Over the railroad,” specifically, was 105-107 North Pettigrew Street.

The 1922 Sanborn fire insurance map shows that Tate Pool Room was located in a brick building just north of Nash Street on the railroad side of the street.

A modern aerial view at Google Maps shows that the rear of present-day 419 East Nash Street consists of two extensions. The first, with the striated roof below, sits in the footprint of Tate’s pool room and may even be the same building. 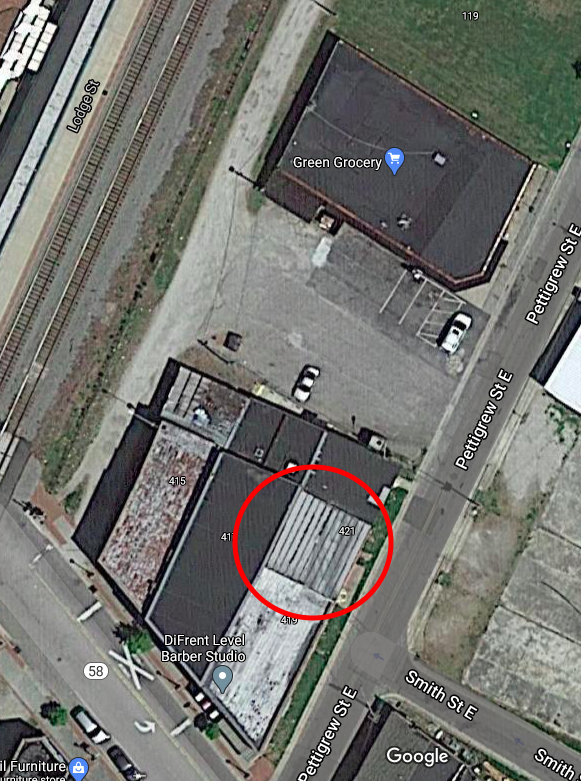 At street level, two bricked-up windows are visible, as well as the original roofline. The building appears to have been cinderblock though, which was not commonly used in Wilson in the era of Tate’s business.

Samuel Randolph Foster registered for the World War II draft in Durham, N.C., in 1945. Per his draft card, he was born 19 February 1927 in Wilson; lived at 403 Henry Street, Durham; was a student at Hillside High School; and his contact was Sam Foster, 403 Henry Street. He was 5’7″, weighed 141 pounds, with brown eyes, black hair and a birthmark in the bend of his right arm. [In fact, per his birth record, Foster was born in 1931 in Wilson to Samuel Foster and Hester Pierce, which would make his age consistent with that in the Times article. In other words, Foster was 14 years old when he was inducted into the Army at Fort Bragg in September 1945.]

Though her gravestone has not yet been found, she is likely buried in the Noah Tate family plot in Odd Fellows cemetery.

Two sets of Tates are buried in Odd Fellows cemetery. At the northeastern edge of the cemetery, near a ditch separating it from Rountree cemetery, is barber Noah Tate family’s large and gleaming white marble headstone. It anchors a family plot that contains intact markers for Noah J. Tate and his two year-old son John P. Tate, and a few broken markers. Perhaps 100 feet away are two small markers for Noah’s father and half-sister, Hardy Tate, a brickmason, and Daisy Tate.

Noah John Tate was a well-to-do barber whose house at 307 North Pender Street is among the best preserved in East Wilson Historic District. For more about Tate’s service on the board of directors of Wilson Normal and Industrial Institute,

In the 1910 census of Wilson, Wilson County: barber Noah Tate, 28; wife Hattie, 24; and children John P., 3, and Helen, 2. [The Tates apparently named a second child after his recently deceased brother.]

Noah John Tate registered for the World War I draft in Wilson County in 1918. Per his draft registration card, he was born 6 November 1876; lived at 208 North Pender Street; was a self-employed barber at 213 East Nash Street; and his nearest relative was wife Hattie Tate. He was described as tall, of medium build, with brown eyes, and black hair. He signed his card with his full name.

Noah J. Tate died 3 January 1926 in Wilson. Per his death certificate, he was 50 years old; was born in Grimesland, N.C., to Hardy Tate of Wayne County and Mary Jane Dawson of Pitt County; was married to Hate Tate; worked as a barber; lived at 307 North Pender; and was buried in Rountree [actually, Odd Fellows] Cemetery.

Mary Jane Tate died 11 June 1927 in Fayetteville, Cumberland County, N.C. Per her death certificate, she was 16 years old; was born in Wilson to Noah Tate of Pitt County and Hattie Pierce of Wilson County; was a student; and was buried in Rountree [probably, Odd Fellows] cemetery.

Noah J. Tate Jr. died 26 September 1929, aged 13. Per his death certificate, he was born in Wilson to Noah J. Tate Sr. of Grimesland, N.C., and Hattie Pierce of Wilson; was a student; and was buried in Rountree [probably Odd Fellows] cemetery.

Andrew Tate died 16 May 1977 in Wilson. He was born 8 September 1908 to Noah Tate and Hattie Pierce; was married to Helen Whitfield; lived at 506 East Vance; and was buried in Rest Haven cemetery. Informant was Helen Tate Huggins, Atlanta, Georgia.

Hardy Tate arrived in Wilson before 1892, when he purchased a lot on Green Street. His two-story home at 611 East Green Street featured a polychrome slate roof. It was demolished in the 1990s. 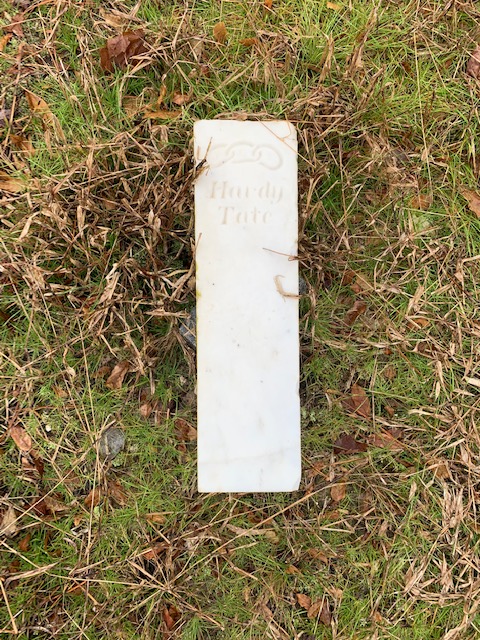 Mary Jane Tate died 24 October 1909 in Wilson. Per her death certificate, she was born in 1857 in Pitt County, N.C.; lived in Green Street; and was married. Undertaker Charles Darden was informant, and she was buried in Wilson.

Annie Beatrice Tate died 20 July 1923 in Wilson. Per her death certificate, she was 44 years old; was born in Wilmington, N.C., to Henry Tate and Catharine Nickson, both of [New] Hanover County, N.C.; was married to Hardy Tate, who was informant.

Ella Gay died 19 November 1933 in Wilson. Per her death certificate, she was 50 years old; was born in Greenville, N.C., to Noah Brown [sic, Hardy Tate] and Mary Jane Brown [sic]; was married to Charlie Gay; and lived at 402 Reid Street.

Hardy Tate died 3 May 1938 in Wilson. Per his death certificate, he was 84 years old; was a brick mason; lived at 611 East Green Street; was a widower; and was born in Duplin County, N.C. Daisy Tate was informant. 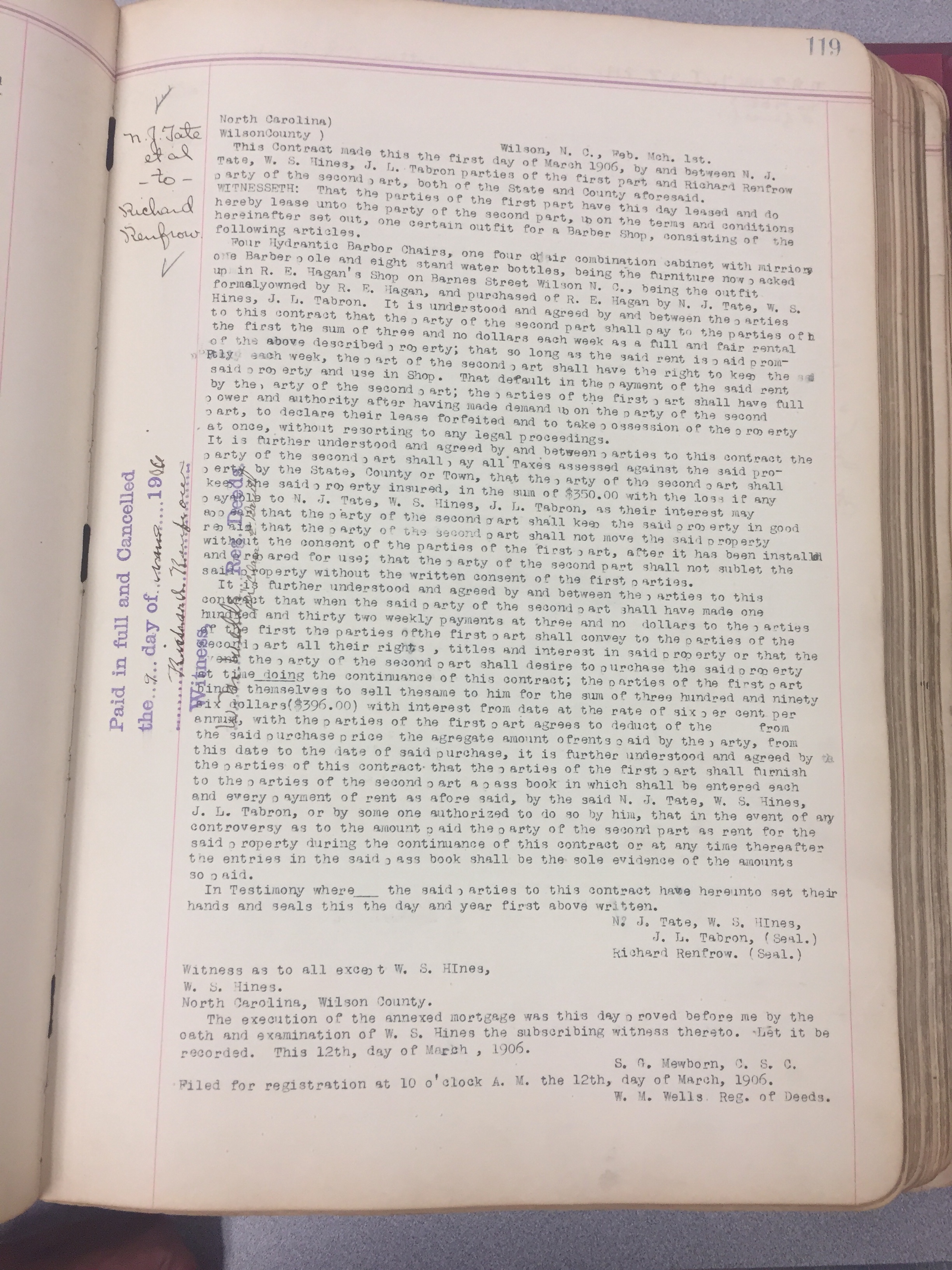 In March 1906, Noah J. Tate, Walter S. Hines and Joshua L. Tabron executed a lease-purchase agreement with Richard Renfrow for the entire contents of a barber shop, including four “hydrantic” chairs, four mirrored cabinets, a barber pole and eight water bottles. These items were “packed in R.E. Hagan’s Shop on Barnes Street,” which Tate, Hines and Tabron had purchased. Renfrow agreed to pay three dollars a week, plus insurance and taxes on the property. After 132 payments, Renfrow would own the barber shop. He paid at an accelerated rate, and the debt was cancelled before the end of the year. 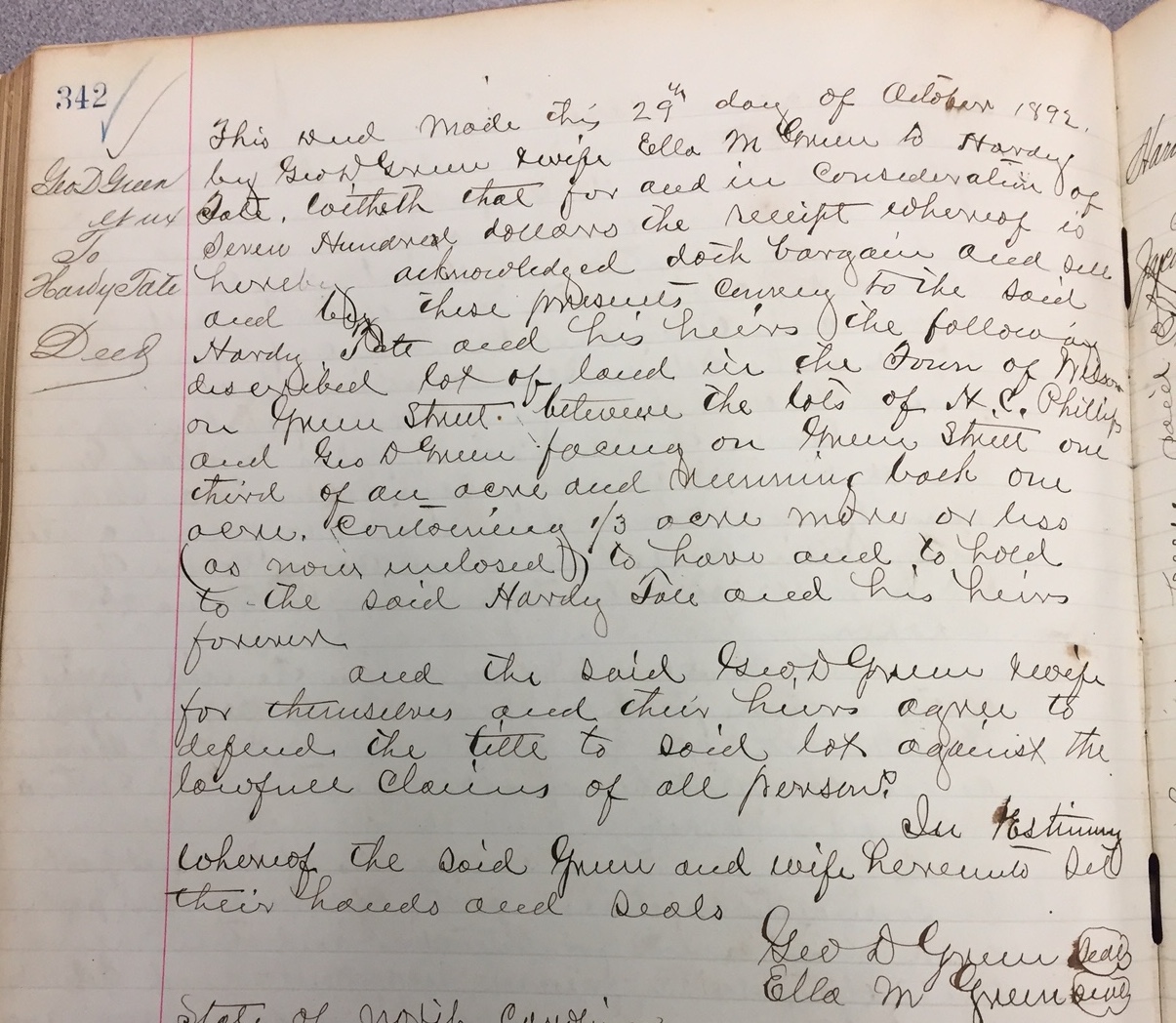 The house Tate erected on this lot burned to the ground under suspicious circumstances shortly after completion. Tate later built this house, probably on the same lot.

The forty-ninth in a series of posts highlighting buildings in East Wilson Historic District, a national historic district located in Wilson, North Carolina. As originally approved, the district encompasses 858 contributing buildings and two contributing structures in a historically African-American section of Wilson. (A significant number have since been lost.) The district was developed between about 1890 to 1940 and includes notable examples of Queen Anne, Bungalow/American Craftsman, and Shotgun-style architecture. It was listed on the National Register of Historic Places in 1988. 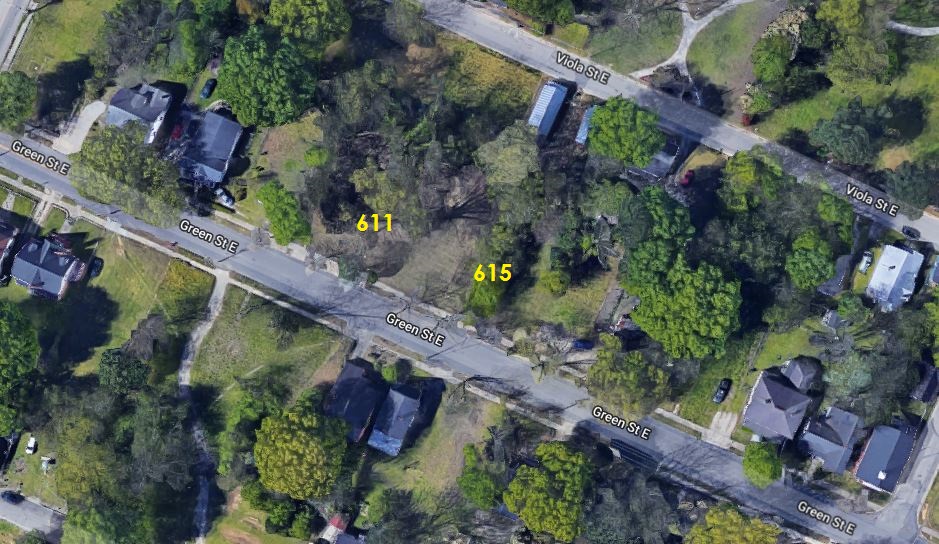 Both 611 and 615 East Green Street have been demolished.

Robert C. Bainbridge and Kate Ohno’s Wilson, North Carolina: Historic Buildings Survey, originally published by the City of Wilson in 1980 and updated and republished in 2010 under the auspices of the Wilson County Genealogical Society, provides additional details about the houses:

“611 East Green Street. The most outstanding feature of this house, built c. 1900 is its magnificent polychrome slate roof. It also boasts a small central cross gable, typical of this period of construction. The porch was probably altered c. 1925 and the paired columns joined by delicate latticework were probably added at that time.”

“William Hines House. 615 East Green Street. Built c. 1915 this simple two-story house is typical of Wilson residential architecture during the 1910’s and 1920’s. The box-like form of the house is enhanced by an elliptical stained glass window flanking the door and generous porch supported by square columns on rusticated stone plinths.”

In the 1908 Wilson city directory: Barnes Caroline, laundress h 614 e Green. (Barnes’ house appears to have been an earlier building on this lot upon which William Hines built his house.) Barber Hines, whose shop was at 119 South Tarboro, lived next door at 612 East Green, the home of his mother and stepfather, Della and Dave Barnes.

In the 1930 census of Wilson, Wilson County: bricklayer Hardy Tate, 70, daughters Inez, 17, and Daisy, 15. Also, renting for $20/month, were plumber and California native Henry Jones and his wife Jessie, 32. Tate owned the house free of mortgage, and it was valued at $8000. 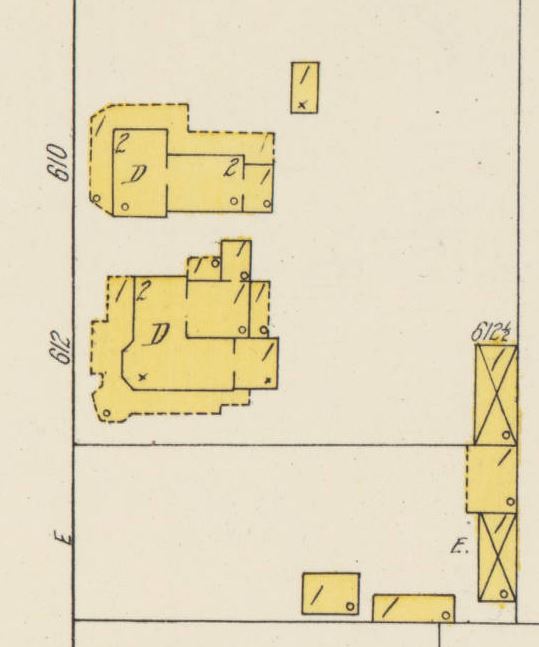 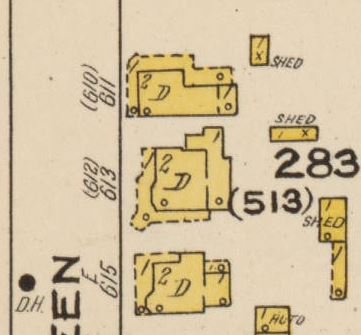 Did Hardy Tate actually burn down his house? He later lived at 611 East Green, and it is not clear if this house was on the same lot.

The ninth in a series of posts highlighting buildings in East Wilson Historic District, a national historic district located in Wilson, North Carolina. As originally approved, the district encompasses 858 contributing buildings and two contributing structures in a historically African-American section of Wilson. (A significant number have since been lost.) The district was developed between about 1890 to 1940 and includes notable examples of Queen Anne, Bungalow/American Craftsman, and Shotgun-style architecture. It was listed on the National Register of Historic Places in 1988.

This house is one of East Wilson’s gems.

Between the dates of the 1920 census of Wilson, in which Tate and his family are listed at 208 North Pender, and the 1922 city directory, the house number changed 307 North Pender.

On 24 November 1904, Noah J. Tate, 28, of Wilson, son of Hardy and Mary Tate, married Hattie B. Pearce, 20, of Wilson, daughter of Andrew and Alice Pearce. Walter S. Hines applied for the license, and Missionary Baptist minister Fred M. Davis performed the ceremony at the residence of Ritchard Renfrow in the presence of S.H. Vick, W.H. Simms and J.D. Reid.

The 1913 Sanborn insurance map shows the dwelling in its original one-story form, as indicated by the 1 inked into the bottom right corner:

Noah John Tate registered for the World War I draft in Wilson on 12 September 1918. Per his registration card, he was born 6 November 1876; resided at 208 North Pender, Wilson; and was a self-employed barber working at 213 East Nash Street. His nearest relative was wife Hattie Tate.

Noah J. Tate died 3 January 1926 in Wilson. Per his death certificate, he resided at 307 Pender Street; was married to Hattie Tate; was born about 1875 in Grimesland, North Carolina, to Hardy Tate of Wayne County and Mary Jane Dawson of Pitt County. He was buried in Rountree cemetery.

Ignore the snark, which was par for the course for newspapers covering African-American social and cultural events. This is a fascinating peek into early East Wilson’s social circles.