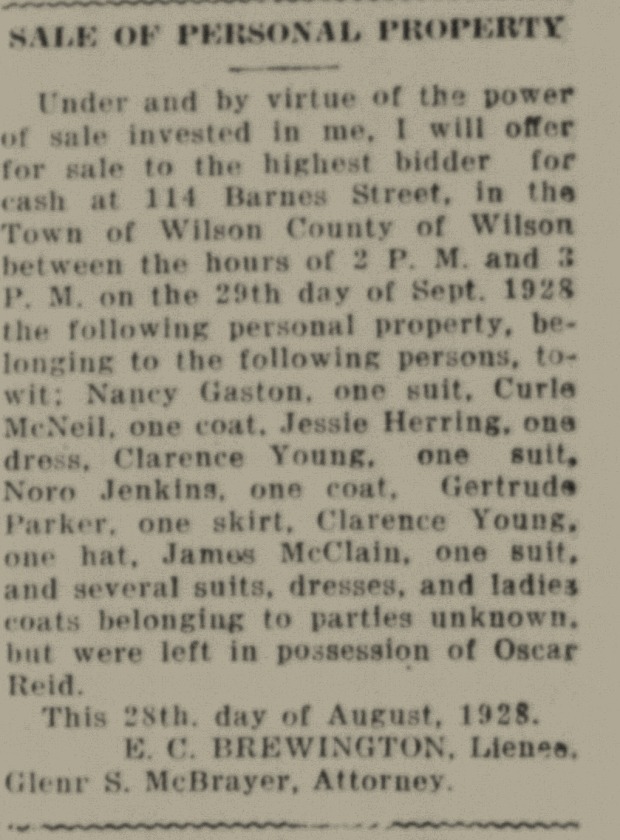 Patrons of Oscar Reid‘s cleaning and pressing business may have been surprised to find their garments advertised for auction to satisfy liens against Reid. Edward C. Brewington, the lienholder, was also in the dry cleaning business.

The seventieth in a series of posts highlighting buildings in East Wilson Historic District, a national historic district located in Wilson, North Carolina. As originally approved, the district encompasses 858 contributing buildings and two contributing structures in a historically African-American section of Wilson. (A significant number have since been lost.) The district was developed between about 1890 to 1940 and includes notable examples of Queen Anne, Bungalow/American Craftsman, and Shotgun-style architecture. It was listed on the National Register of Historic Places in 1988. 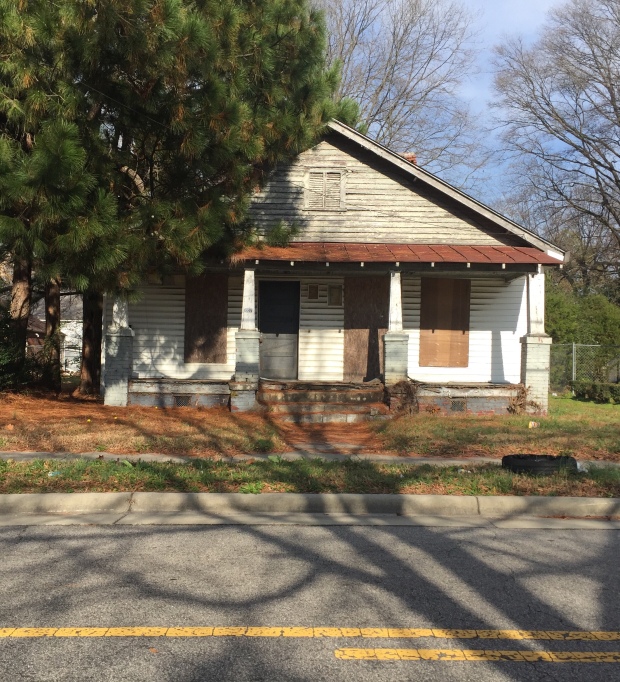 As described in the nomination form for the East Wilson Historic District: “ca. 1930; 1 story; double shotgun with bungalow-type porch posts.”

In 1940, Herman Hardy registered for the World War II draft in Wilson. Per his registration card, he was born 8 December 1907 in Greene County; his contact was wife Elizabeth Hardy, 1007 East Nash; and he worked for Watson Tobacco Company, Wilson.

In 1940, Carter James Powell registered for the World War II draft in Wilson. Per his registration card, he was born 4 January 1899 in Nash County; his contact was Sylvester Powell, “no number” East Nash “near Gills Store”; and he worked for Dr. M.A. Pittman, Raleigh Highway, Wilson, who was a second contact.

Virginia A. Jones died 3 July 1966 in Wilson. Per her death certificate, she was born 12 May 1879 in Wilson County to Enos and Cherry Applewhite; had been a farmer; was the widow of Joseph Jones; and resided at 1007 East Nash. Informant was [daughter] Elizabeth Hardy, 1007 East Nash.

Walter Jones died 31 November 1973 at home at 1007 East Nash, Wilson. Per his death certificate, he was born 10 August 1921 in Wilson County to Joseph Jones and Virginia Applewhite; had been a cook; and was married to Nora Allen. Informant was sister Elizabeth Hardy, 1007 East Nash.

Elmer Jones died 21 March 1975 at the Veterans Administration Hospital in Durham, N.C. Per his death certificate, he was born 20 January 1920 in Wilson County to Joseph Jones and Virginia Applewhite; had been a porter-electrician; had never married; and resided at 1007 East Nash. Informant was sister Elizabeth Hardy, 1007 East Nash.

Elizabeth Jones Hardy lived in her home at 1007 East Nash until she passed away in 2001. 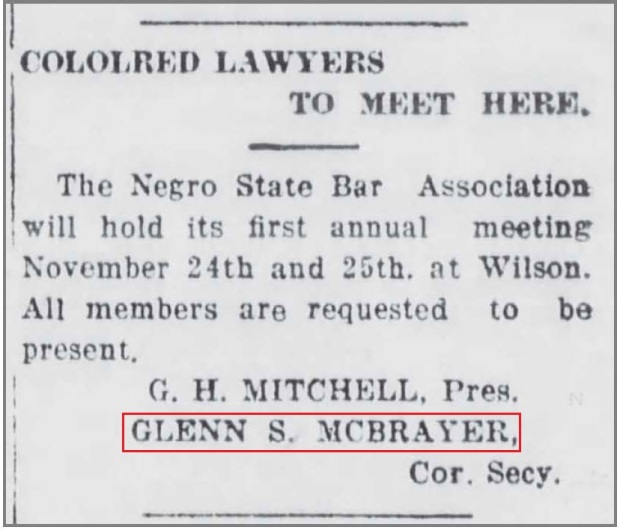 Glenn S. McBrayer was born about 1884, probably in South Carolina, to Randall and Sylvia McBrayer. He was reared near Shelby, in western North Carolina, and appears in Cleveland County in the 1900 census. Ten years later, he was listed as a 23 year-old farm laborer, but he was soon to make life-changing moves. Sometime during the decade he obtained a degree from Howard University. In January 1917, he married Lillie Brown in Zebulon, Nash County. Shortly after, he passed the North Carolina bar.

In 1920, however, the McBrayers were in Wilson, and, according to the census,  Glenn was working a retail grocery merchant. Sometime during the next year, he hung out his shingle and got himself elected corresponding secretary of the Negro State Bar Association. In the 1922 Wilson city directory, his occupation is clearly noted:

He appears in Wilson directories throughout the 1920s, but seems to have left Wilson after 1930. In 1934, Glenn and Lillian McBrayer are listed in the city directory of Buffalo, New York. His occupation is given as salesman.