When Annie Parker Daniels celebrated her 100th birthday in 1994, no one could have predicted that she would be blessed with eleven more!

Shortly after her 109th birthday, the Daily Times ran a more in-depth feature on the remarkable Annie Daniels. Among the details: her parents worked a farm near the present location of New Hope Missionary Baptist Church on N.C. Highway 58 North; she joined Ellis Chapel Free Will Baptist Church in 1904 and remained a lifelong member; she attended Battle School; she did housework, cooking and childcare for Eunice Williams; she was the oldest of twelve children; she married Herman Daniels in 1912 [actually, 1913] and had four children [who survived infancy] before he died in 1933. 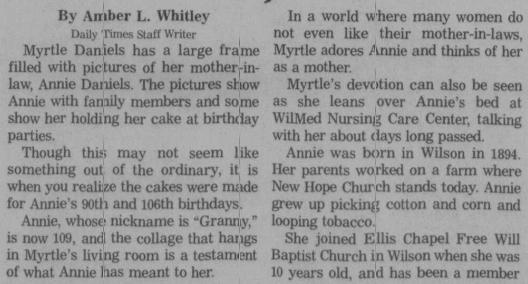 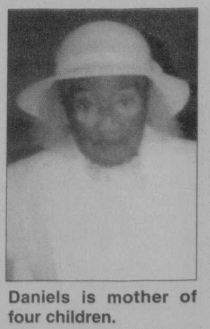 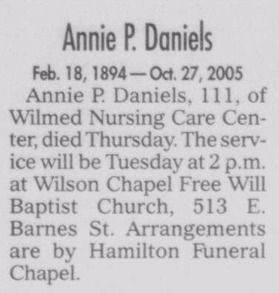 Moses Daniel died 26 July 1915 in Wilson township, Wilson County. Per his death certificate, he was born 11 March 1914 in Wilson County to Herman Daniel and Annie Parker.

Herman Daniel died 19 October 1934 at Mercy Hospital, Wilson. Per his death certificate, he was 35 years old; was born in Wilson County to George Daniel and Lucy Daniel; was a farmer; was married; and was buried in Rountree cemetery. Annie Daniel was informant.

Lucy Daniels Fulghum Farr died 18 October 1966 in Durham, North Carolina. Per her death certificate, she was born 3 February 1927 in Wilson to Herman Daniels and Annie Parker; resided in Nashville, Nash County; and was married to Ernest Farr.

Per her death certificate, Hattie Owens Daniels died 25 April 1979; was born 4 July 1900 in Chester, Georgia, to Mack Owens and Mary Gardner; was a widow; resided at 908 Wainwright Avenue, Wilson; and was a minister and kindergarten teacher. Daughter Deborah Daniels was informant.

In 1986, Mary Freeman Ellis published The Way It Was, a memoir of life with her father, noted stonemason Oliver Nestus Freeman. 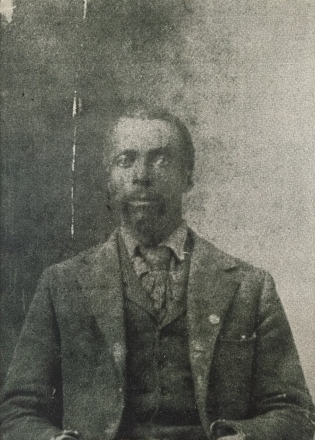 I remember my paternal grandfather, Julius Freeman, as being a very eccentric and private individual. Grand Dad always looked old to me since he wore a long, gray beard and his hair was also graying. He was born in Johnson [sic] County in 1844 and died in 1927 at the age of 83. His first wife, Eliza Daniels, was born in 1844 in Wilson County She was the oldest of three siblings, two sisters, Millie, Zannie, and one brother, Warren. I never saw my paternal grandmother Eliza Daniels Freeman. She was very pretty from a portrait. You could see her Indian heritage and she wore her hair in two long braids. She had a light, olive complexion.

Julius Franklin Freeman died 18 September 1927 in Wilson. Per his death certificate, he was born 16 April 1844 in Johnston County, North Carolina, and was married to Nancy Freeman.