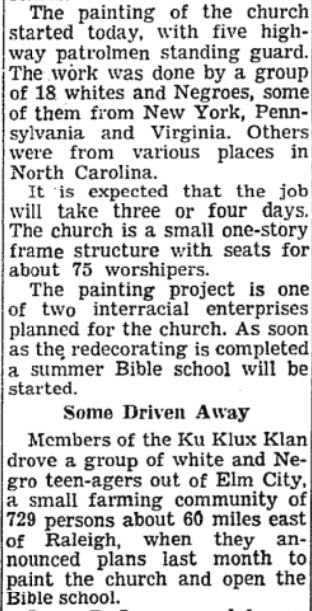 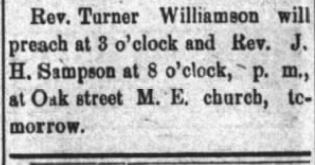 This entry appears in the 1928 Hill’s Wilson, N.C., city directory:

Who was Theodora Percival, and what was a “religious education maker”?

Percival appears her family in the 1900 and 1920 censuses of Greenville, Greenville County, South Carolina. She attended Barber Scotia College in Concord, North Carolina, and went to work for the missionary arm of the Presbyterian Church. It apparently was in this capacity that Percival arrived in Wilson in the late 1920s and took a room in the home of William and Ethel Hines, stalwarts of Calvary Presbyterian.

She did not remain in Wilson long.

In 1932, Leland Cozart accepted a position as the president of Barber Scotia College, a post he held until he retired in 1964.

Theodora Percival Cozart died 19 February 1963 at Barber Scotia College, Concord, Cabarrus County, North Carolina. Per her death certificate, she was born 5 February 1897 in South Carolina to Henry Percival and Jennie Thompson; was married to L.S. Covert; resided on West Depot Street at Barber Scotia; and was a housewife. She was buried in Charlotte, N.C.

The Committee appointed by the Presbytery in session at Burgaw, North Carolina, April 1904, to visit Elm City, N.C. and to organize a church if the way be clear. We met the petitioners on the 29th day of May, 1904 in the Methodist Church. The sermon was preached by the Reverend Clarence Dillard, PhD of Goldsboro, N.C. from 2 Timothy 2:19. After the sermon, those who desired to walk together in the Presbyterian faith were asked to join hands around the pulpit, and the following came forward:

The church having been organized, it was agreed that it be known as The First Presbyterian Church of Elm City, North Carolina.

“The Albion Academy was designed to prepare young men and women to be teachers in schools intended for the instruction of colored people in the Southern States.

“It was organized by the late Rev. Moses A. Hopkins, its first principal, and aided by his Presbyterian friends North and South.

“Like all schools, at its commencement, it had many obstacles to fight. But by prayer, and the indefatigable energy and push of its founder, it grew gradually until it attracted the public in such a way, that the State of North Carolina, feeling the need of having intelligent, warmhearted citizens who will exercise their right of suffrage intelligently, and for the good of their country, the elevation of the race, and the glory of God, established six Normals, and located one at Franklinton, in connection with the Albion Academy.”

Albion Academy’s 1892-93 catalog listed 58 students by name in the Academic program and claimed another 189 in the preparatory and primary programs. Though Samuel H. Vick and Rev. Leavy J. Melton (and Clarence Dillard) served on the school’s board of trustees, no children from Wilson matriculated at Albion that year.

Excerpts from catalog found at http://www.ancestraltrackers.net/nc/franklin/catalogue-albion-academy-1892.pdf

This handsome, but bedraggled, church looms over a dead-end intersection just off the main road bisecting Elm City. It now appears to be home to a Tabernacle of Prayer for All People. It began life, however, as First Presbyterian Church, one of many congregations in eastern North Carolina fostered by Rev. Clarence Dillard, but one with a unique and startling place in the Civil Rights history of the Region.

From The 112th Annual Report of the Board of Home Missions of the Presbyterian Church in the United States of America (1914).

Here’s how the story is told by the Presbyterian Church (USA) in Cape Fear Presbytery Centennial 1886-1986:

Charles W. McKinney gives a historian’s perspective in Dispatches from the Front: The Civil Right Act and Pursuit of Freedom in a Small Southern City:

“The first volley between local authorities and activists in Wilson in the summer of 1964 gave change agents the opportunity to continue their pursuit of greater freedom. In the early part of June, James Costen, the young pastor of the First Presbyterian Church, a small church located in Elm City, invited an interracial group of northern students from New York and Pennsylvania to Wilson to paint the outside of the church. Costen and his parishioners were African American. Upon arriving in the small town north of Wilson, the group of students was approached by Robert Jones, Grand Dragon of the Ku Klux Klan. In a not-so-veiled threat, Jones informed the students that he could not guarantee their safety if they remained in town and attempted to paint the church alongside Negro volunteers. The northern volunteers promptly packed up and returned home.

“Events in Elm City quickly took a turn toward the bizarre. On the evening of July 9, Costen received a phone call from Jones, who informed him that he had gathered approximately two hundred fifty Klan members from Wilson and Nash Counties in front of the town hall. Then, Jones offered the services of his crew to paint the church. Jones’ assortment of handymen included thirty-five expert painters equipped with forty floodlights and forty gallons of paint. They would work all night, said Jones, and finish by noon the next day. Undoubtedly flustered by the Grand Dragon’s offer to paint the rural black church, Costen demurred, maintaining that the decision to paint the church now rested in the hands of his superiors. Jones accused the pastor of “not wanting to get the church painted, but of desiring to make a racial issue by bringing in outsiders.” Jones then informed Costen that an “integrated brush” would not touch the walls of the church, and that another attempt toward that end could get somebody killed. When Mayor George Tyson found out about the presence of hundreds of Klansmen armed with paintbrushes and paint in his city, he called the sheriff’s office in Wilson. The sheriff’s office then notified the mayor that Governor Terry Sanford had just mobilized the state highway patrol. Authorities broke up the assembly around eleven that evening. “I feel safe in saying,” Costen later told a reporter, “at this point we will refuse their help.””

Please follow the link above for the full text of the article, which was published on-line in History Now: The Journal of Gilder-Lehrman Institute. First Presbyterian’s resistance, which unfolded during the mounting tensions created by the disappearance in Mississippi of civil rights workers Michael Schwerner, James Chaney and Andrew Goodman, received wide coverage across the country. Today, though, the story of this small rural church’s stand against the Klan is largely forgotten. 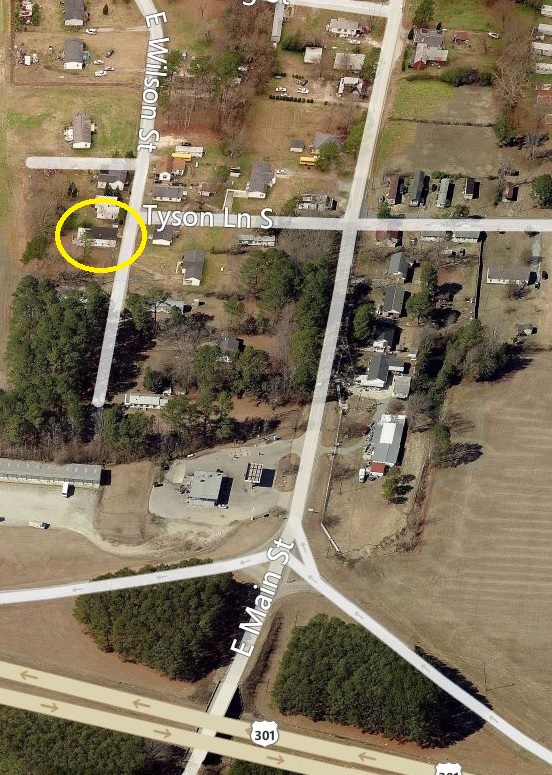 Hat tip to Cassandra W. Wiggins for identifying the photograph I took of the church in July 2016. Map courtesy of bing.com.