In November 1938, Isaac Isler filed suit in county court against three police officers for false arrest and  injuries sustained during a beating in his home. As set forth in the Daily Times on the 12th, Isler’s suit alleged that the officers had entered unannounced and, when he asked for their warrant, began pistol-whipping and beating him with the black jacks, seriously injuring his eye.

On 26 April 1939, the Daily Times detailed the testimony at trial. Dr. T.N. Blackshear testified that Isaac Isler’s eye trouble was caused by red pepper concealed in a handkerchief that Isler rubbed in his eye during his examination. Jailer S.G. Gunter testified that on 3 June 1938, when Isler was jailed, he had not complained of injury, and Gunter had seen no blood on him. Detective Philemon Ray Hartis swore that he had entered the house in search of boys wanted for attacking another Negro. “I fell on the ground and I saw Isler’s wife coming toward me with an iron poker, and his son with a lawn mower handle. And I took out my black jack and lightly tapped him over the head so I could get up.” Chief of Police Clyde Preston Hocutt testified that he had taken the poker from Isler’s wife, and the boy with the lawn mower handle had thrown it down and run away. He denied touching Hocutt. When Isler took the stand, he testified that the three officers had come to his house “looking for some boys or my sons.” He said he was not sure which man had beaten him and only recognized them by their voices. Isler was totally blind “except for a little shade of light.” He had lost the vision of his right eye in World War I and most in his left eye since the beating. Isler’s wife Vivie Isler testified that the police were looking for boys who allegedly beat a man and stole his mule, and Officer L.C. Cooper had beaten her husband with the butt of his gun and Hocutt, with his fist. Isler’s son R.D. Isler, who was one of the boys sought, testified similarly to his parents. Dr. Joe Carr testified that he did not recall treating Isler for head wounds, but hospital records show he was treated for head lacerations.

I have not found a report of the outcome of the trial, but I am fairly confident that the judgment was against Isler.

Here is how Karl Fleming described early-1950s Ray Hartis in Son of the Rough South:

” … [Chief Privette’s] knowledge pretty much ended at the edge of “niggertown,” into which he rarely ventured. The job of following what was happening across the tracts fell mainly to Detective Ray Hartis. He was a concrete block of a man, five feet, eleven inches and 200 pounds, with a large head covered with bristly graying hair. He had thick eyebrows, cold gray eyes, red cheeks, and a large pickle of a nose lined with tiny red tributaries — marks of the hard drinker that he was. He was about forty, married but childless, a longtime cop who carried a .38 Smith and Wesson pistol on his hip, and a blackjack in his rear right pocket. …

“He was a loner with the harsh and unapproachable manner of a bitter and disappointed man, disdainful of and not well liked by his fellow cops.

” … we’d cruise back through town and across the Atlantic Coast Line tracks into the little colored business district, only two blocks long. Ray would slow the car down to a crawl, and as we went along, silence would fall over the little knots of black men laughing and talking on the street.

“One sultry night as we cruised the alleys, Ray suddenly stopped the car in front of a shotgun shack and got out.

” ‘I heard this son-of-a-bitch is a member of the N-Double-Fuckin’-A-C-P,’ he said. … Suddenly a gray-haired old black man appeared out of the back room rubbing his eyes and pulling on a pair of overalls over his bare shoulders.

” ‘Whatcha doin’, Mistuh Hottis? You got a search warrant?’ he said.

“Ray turned, his face all red, lunged at the black man and slapped him hard across the cheek. Down the old man went on his back to the floor, and Ray said, ‘That’s one side of my goddamned search warrant. You wanna see the other one?'”

In 1917, Isaac Isler Jr. registered for the World War I draft in Lenoir County, North Carolina. Per his registration card, he was born 11 April 1890 in Georgia; lived in LaGrange, N.C.; farmed for A.T. Rouse of LaGrange; and was single.

Rufus Isler, aged 20 days, died 11 June 1931 in Wilson. Per his death certificate, he was born in Wilson County to Isaac Isler of Atlanta, Georgia, and Matilda Exum of Wayne County, N.C., and resided at 803 Evans Street, Wilson.

Matilda Isler died 2 June 1936. Per her death certificate, she was 24 years old; was married to Isaac Isler; was born in Wayne County, N.C., to Henry Exum of Greene County, N.C., and Harriett Best of Wayne County; was engaged in farming; and was buried in a family cemetery in LaGrange, N.C. Her cause of death? “Probably puerperal sepsis. Saw her once with midwife — She was dying at that time — Baby 10 days old.”

In 1942, Aaron Isler registered for the World War II draft in Wilson. Per his registration card, he was born 28 August 1921 in Wayne County; resided at 510 New Bern Street, Wilson; his contact was Isaac Isler of the same address; and he worked for N.M. Schaum, Acme Candy Company, 904 West Nash Street.

In 1942, Robert Isler registered for the World War II draft in Wilson. Per his registration card, he was born 26 December 1924 in LaGrange, N.C.; resided at 510 New Bern Street, Wilson; his contact was Isaac Isler of the same address; and he was a student at Darden High School.

In 1942, Richard J. Isler registered for the World War II draft in Wilson. Per his registration card, he was born 5 May 1925 in Wilson County.; resided at 510 New Bern Street, Wilson; his contact was Isaac Isler of the same address; and he was unemployed. 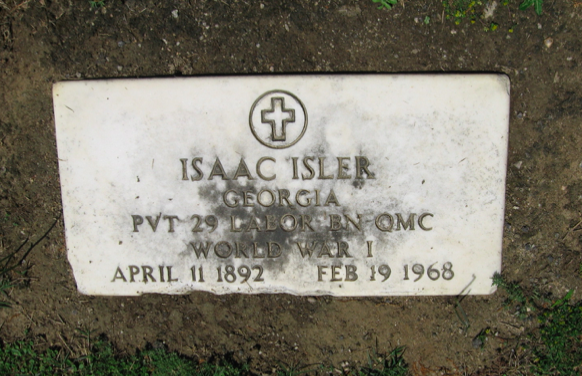