A few weeks ago, I promised to go a teeny way toward carrying out my original plan for several one-place studies by turning the focus of Black Wide-Awake briefly to other beloved Black communities. This week I’ll be guest-blogging (though in my own space) from time to time about Iredell County, North Carolina, my maternal grandmother’s birthplace, two hundred miles west of Wilson on the western edge of North Carolina’s Piedmont.

I’ll start with an introduction to my great-great-great-grandfather Walker Colvert, who was born enslaved about 1819 in Culpeper County, Virginia. When Samuel W. Colvert died in 1823, Walker passed to his son John Alpheus Colvert, who had migrated to Iredell County and bought land on Rocky Creek, a South Yadkin River tributary.

Only four years later, John A. Colvert died. This excerpt from his estate records shows  “Negroes hired for one year,” that is, enslaved people leased to neighbors to earn money for Colvert’s estate and the support of his widow and children. “Boy Walker” was about eight years old. That he was listed without his mother may suggest that he was an orphan, though he was about the age to be separated from her and put to work on his own. Walker’s kinship to Jerry, Amy, Joe, Ellen, Meel, Anda, Charlotte, and Lett is unknown.

When he reached adulthood in 1851, John’s son William Isaac Colvert inherited Walker and held him until Emancipation on his farm in Eagle Mill township. The same year, Walker Colvert fathered a son, John Walker Colvert, by Elvira Gray. The boy and his mother were likely enslaved on a nearby plantation, perhaps that of William I. Colvert’s sister, Susan Colvert Gray. Around 1853, Walker married Rebecca Parks, a relationship that was not legalized until they registered their cohabitation as freed people in 1866. Their registration notes three children — John (Rebecca’s stepson), Elvira, and Lovenia. Rebecca also had a son Lewis Colvert, born about 1860, whom Walker reared but apparently did not father.

Walker Colvert and his son John Walker worked for decades after slavery for William I. Colvert, likely both on his farm and at his cotton manufacturing enterprise, Eagle Mills. Walker eventually bought a small farm in nearby Union Grove township, though he did not record a deed for it. On 16 March 1901, with the help of his neighbors he drafted a short will leaving all his property to his widow Rebecca Colvert, and then to his son John Colvert. Four years later, he died. 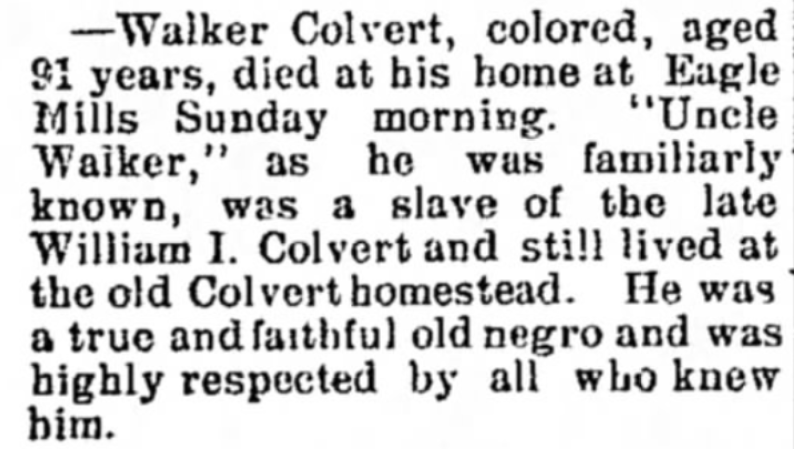 In the 1900 census of Union Grove township, Iredell County: farmer Walker Colvert, 84, and wife Rebecca, 60. Both reported having been born in Virginia.