On the evening of 2 July 1945, Charles Raines and/or Guy Cox aimed a camera at Hill’s Fish Market, deep in East Wilson’s commercial block. Hill’s and its next-door neighbor, Mercer’s Grocery, were white-owned, but catered to African-American shoppers. 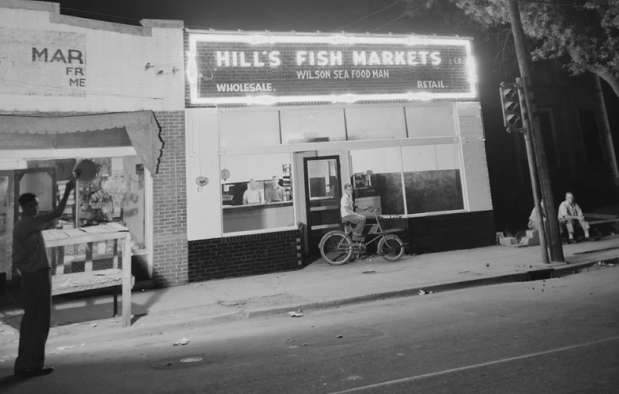 Hill’s and Mercer’s were at 548 and 550 East Nash Street, across from Jackson Chapel First Missionary Baptist Church. (The traffic light faced what was then the south end of Pender Street, which stopped at East Nash. On the other side of Nash, at a dog-leg, was then Stantonsburg Street.) Both buildings are long gone. Dr. Julian B. Rosemond built a dentist’s office at 548 in the late 1960s; it now houses a hair salon. 550 is a vacant lot.