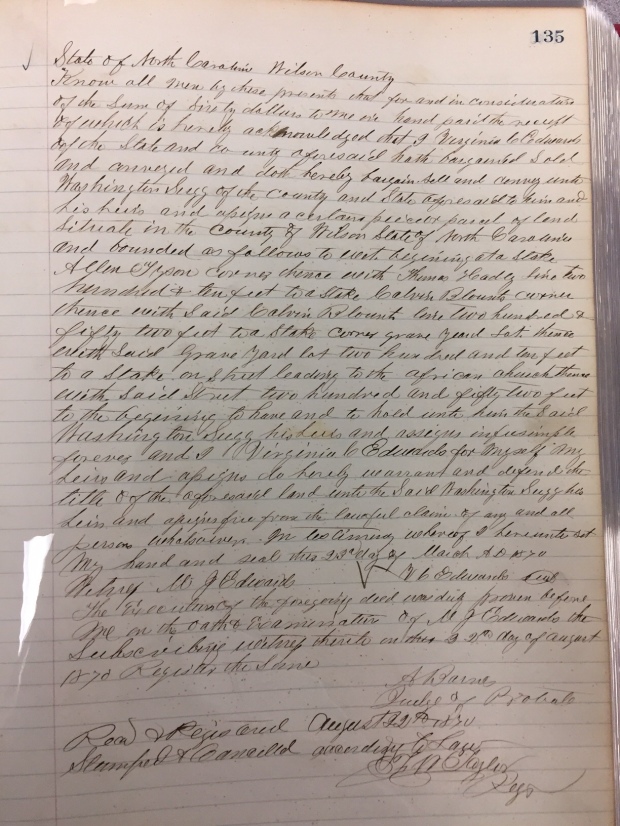 Know all men by these presents that for and in consideration of the Sum of Sixty dollars to me in hand paid the receipt of which is hereby acknowledged that I Virginia C Edwards of the State and county aforesaid hath bargained sold and conveyed and doth hereby bargain sell and convey unto Washington Sugg of the county and State aforesaid to him and his heirs and assigns a certain piece or parcel of land situate in the County of Wilson State of North Carolina and bounded as follows to wit beginning at a stake Allen Tyson corner thence with Thomas Hadley line two hundred & ten feet to a stake Calvin Blounts corner thence with said Calvin Blounts line two hundred & fifty two feet to a Stake corner grave yard Lot thence with said grave yard lot two hundred and ten feet to a stake on street leading to the African church thence with said street two hundred and fifty two feet to the beginning to have and to hold to him the said Washington Sugg his heirs and assigns in fee simple forever and I Virginia C Edwards for myself my heirs and assigns do hereby warrant and defend the title of the aforesaid land unto the said Washington Sugg his hairs and assigns free from the lawful claim of any and all persons whatsoever. In testimony whereof I hereunto set my hand and seal this 23rd day of March AD 1870  /s/ V.C. Edwards

This deed is remarkable not only as the first filed by Washington Suggs, just five years after his emancipation in Greene County, but also for its reference to the “graveyard lot” and “the African church.”

The graveyard lot appears to be the cemetery that preceded Oakdale, cemetery. This deed establishes that the older cemetery was already in existence in 1870..

The African church appears to be the church later known as Jackson Chapel (and later still, after a merger, as Jackson Chapel First Missionary Baptist Church), which was located on Barnes Street just off Pender Street (then Stantonsburg Street), a block south of Nash Street. If so, this deed pushes back the date of the building of the congregation’s first edifice.

Sugg’s new neighbor, Calvin Blount, was also African-American and formerly enslaved. His will, drafted in 1909, contains this provision — “Fourth: To my beloved sons Wright Blount and Tillman Blount, whom I have not heard from in many years — I do hereby give and bequeath to them to share and share alike my other lot of land on the edge of the Town of Wilson, State and County aforesaid, adjoining the lands of G.W. Sugg, Cater Sugg, and the Colored Cemetery, containing about one acre.”