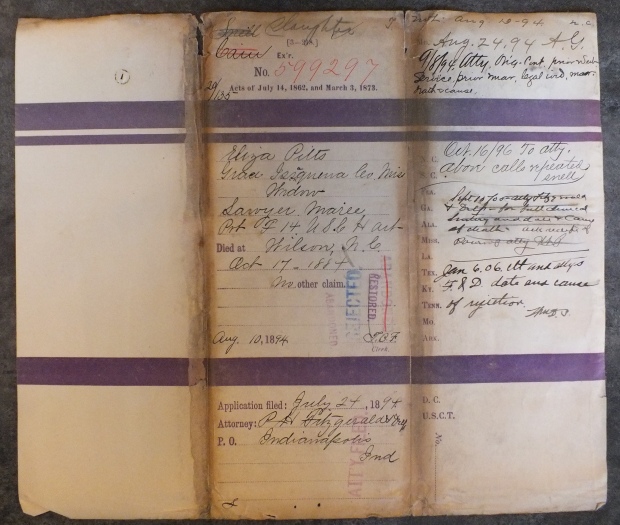 Eliza was living in Issaquena County, Mississippi, when she applied. She noted that her late husband Lawyer Maree had served in Company F, 14th Regiment of the United States Colored Heavy Artillery, having enlisted in Morehead City, North Carolina, in February 1865. Eliza’s maiden name was Taylor, and she and Lawyer had married in Wilson County in October 1861. Lawyer died in 1884, and Eliza remarried in 1887.

The Record and Pension Division of the War Department searched its files to confirm Lawyer’s enlistment and to provide a physical description of the young soldier: age 28, 5’10”, black eyes and hair, dark complexion. However, his name did not appear on muster rolls during his period of service, nor did he have medical records.

An affidavit provided additional information. Most notably, Eliza stated that “Lawyer Maree was known at home as Lawyer Barnes but enlisted under name of Lawyer Maree.” No Marees appear in Wilson County records, but in the 1870 census of Black Creek township: 35 year-old farm laborer Lawyer Barnes, his wife Lizzie, 28, and probable mother Lucy Barnes, 70.

Eleven years later, Eliza was still trying. “I am unable to give you the exact date of the death of my husband Lawyer Maree,” she averred, “for the reason that I cannot write and could not set it down….”

Her claim was rejected in January 1906: “Claimant is unable to show cause of death, or that same originated in service and line of duty. There is no record of any disability, and no medical or other evidence to show soldier’s death [of malaria] due to service.”