This is the first known map of Wilson, copied from a drawing made in 1872 by E.B. Mayo:

The orientation is odd, as the bottom of the page is north. (Or, more strictly speaking, northeast.) There, encircled at the edge, is the only reference to any of the African-Americans who made up just over a quarter of the town’s population in the early 1870s. It’s Lemon Taborn‘s barbershop.

Here, roughly outlined, is that area of downtown Wilson today: 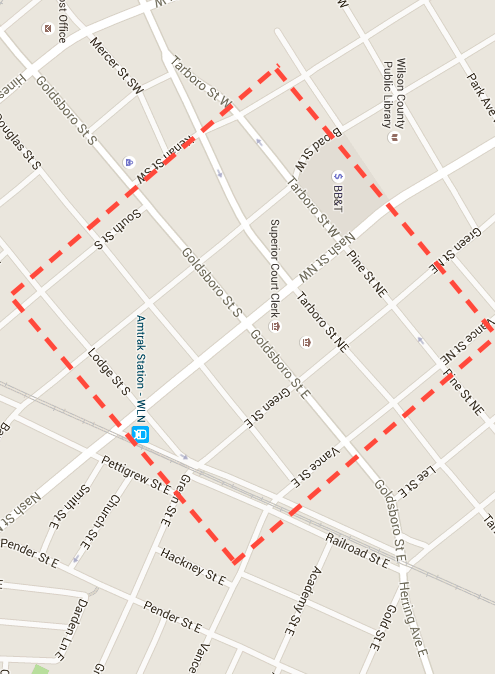 Spring Street is now Douglas and Nash Street extends across the tracks (replacing “the Plank Road,”) but otherwise street names remain the same. There are, of course, no marl holes or wells or trees in the middle of roads. The railroad in the 1872 map is not angled enough; despite appearances, it does not parallel downtown streets. Today, Lemon Taborn’s location at Tarboro just past Vance Street is roughly the site of the Wesley Shelter, Wilson County’s domestic violence and sexual assault agency.