This story, as breathlessly reported by the Wilson Daily Times, hit all the marks for maximum titillation — a strange “big black” criminal, a shoot-out in Darktown, a triumphant police officer. 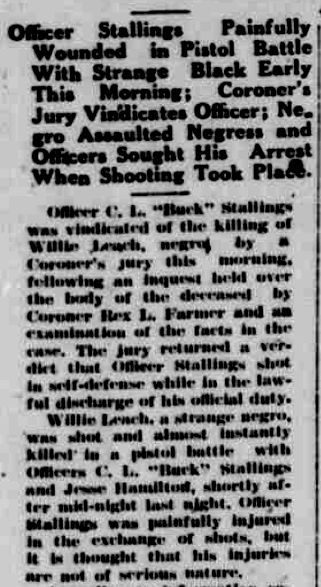 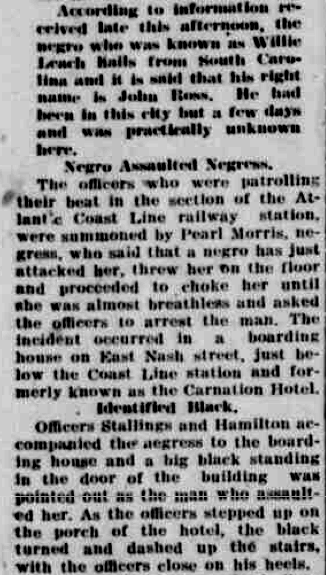 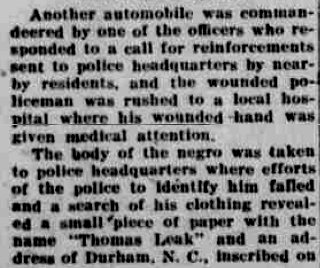 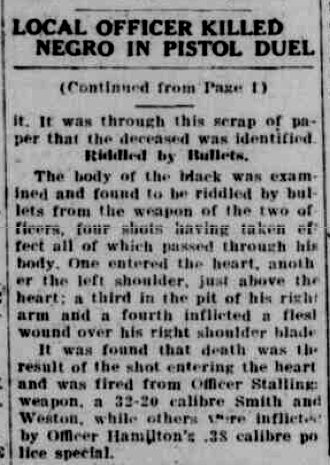 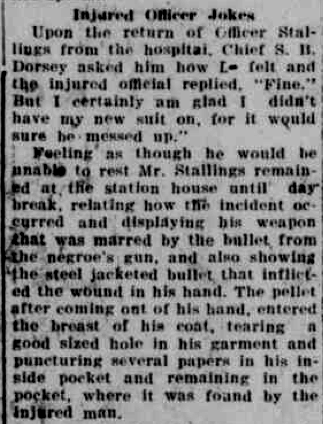 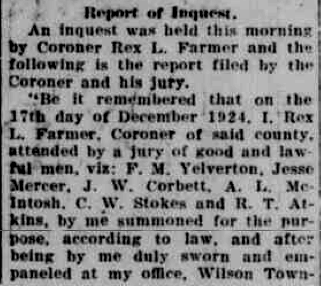 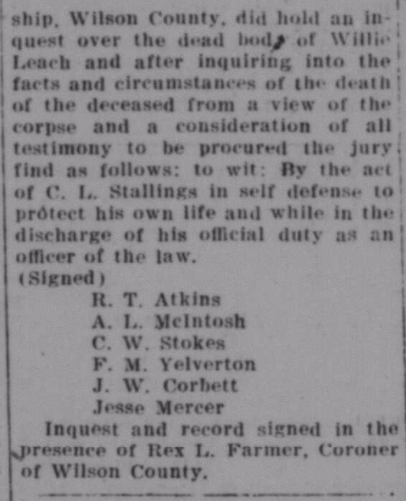 In a nutshell (with facts, or purported ones, augmented by a Wilson Mirror article published the same day): Around midnight, Officers Buck Stallings and Jesse Hamilton were patrolling near the Atlantic Coast Line railroad station when they encountered Pearl Morris, who had just been badly beaten “in a boarding house on East Nash street … formerly known as the Carnation Hotel.” (Though I’ve never seen it called by this name, I am certain this is the Orange Hotel.) The policemen followed Morris to the boarding house; a 25 to 30-year old man standing in the doorway turned and ran inside when he saw them. (Per the Mirror, “The police were informed … of the stranger’s presence in town and also were acquainted with the fact that he was carrying a gun ….”)  The officers confronted the man on the second floor balcony, and he allegedly shot Stallings in the hand. Stallings and Hamilton opened fire; the man unloaded, turned and leapt over the railing. When he hit the ground, he did not move.  (Per the Mirror, a shot sent him “whirling around and crashed him up against the upper porch railing.”) “A colored physician happened to be in the crowd” — William Mitchner, who lived a few doors down? — and declared the man near death. He was loaded into somebody’s car and rushed to Mercy Hospital, but died en route. (Again, the Mirror casts a more dramatic scene: Stallings, despite his injuries, holding back the crowd with his gun until reinforcements arrived.)

The man’s body was taken to police headquarters. A search of his clothing yielded a name, Thomas Leak, and an address in Durham, N.C. He had been shot four times by two guns, with one shot passing through his heart and killing him. Meanwhile, Officer Stallings basked in adulation at the station house, cracking jokes and recounting his adventure. (The Mirror: “His escape from death was little short of miraculous.”)

Without explaining the discrepancy with the information found in his clothes, the Times named the strange man as Willie Leach. The Mirror added that he had come from Columbia, S.C., or Durham, and his suitcase contained “a strange assortment of articles, razors, four or five fountain pens, carton of cigarettes, screw driver, vanity box and numerous other things.”

Within hours of the shooting, a coroner’s jury held an inquest and found the homicide of Willie Leach justified.

In the 1910 census of Wilson, Wilson County: on Green Street, painter David Morris, 34; wife Lillian, 30; and children Pearl E., 12, Charles, 9, Lillian, 7, and David E., 7 months. [The Morrises appear to have lived on the first block of Green east of the railroad in a block that was otherwise occupied by white families.)

Pearl Morris died 16 October 1936 in Wilson. Per her death certificate, she was 28 years old; was born in Boston, Massachusetts, to David Morris of Henderson, N.C., and Lillian Hinson of Boston; and lived at 723 East Nash Street. Mable Phillips, Smith Street, was informant.