The one hundred twenty-seventh in a series of posts highlighting buildings in East Wilson Historic District, a national historic district located in Wilson, North Carolina. As originally approved, the district encompassed 858 contributing buildings and two contributing structures in a historically African-American section of Wilson. (A significant number have since been lost.) The district was developed between about 1890 to 1940 and includes notable examples of Queen Anne, Bungalow/American Craftsman, and Shotgun-style architecture. It was listed on the National Register of Historic Places in 1988. 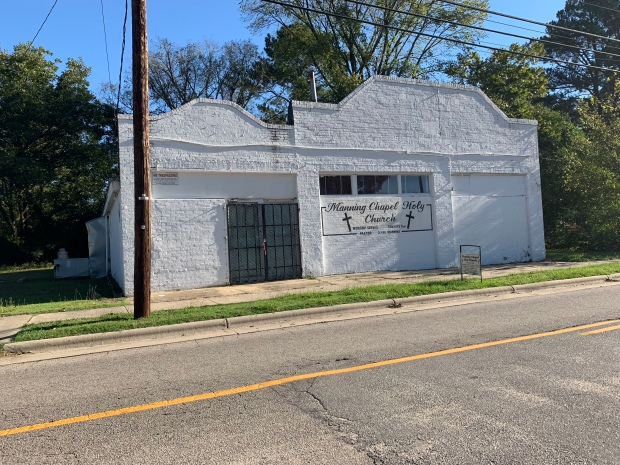 As described in the nomination form for the East Wilson Historic District, this building is: “909-911 [Nash]; ca. 1930; 1; Cain’s Grocery; district’s largest grocery; brick-veneered structure with parapet front.” The correct address for this building is in fact 915 East Nash Street. 909 and 911 are empty lots.

The 1922 Sanborn fire insurance map of the block shows three contiguous wood-framed commercial buildings, two marked as groceries, in the 900 block of Nash Street. The middle building, at 913, appears to be the precursor of the building above.

As early as July 1936, Gill’s Grocery advertised in the local newspaper: 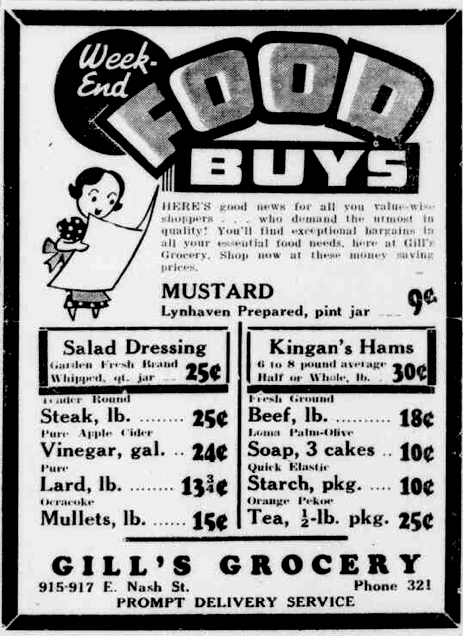 Gill’s Grocery remained in business at 915 East Nash Street into the 1970s. Cain’s Grocery and other supermarkets succeeded Gill’s into the early 21st century. Most recently, the building has housed a church.