Don’t let anyone tell you that slavery destroyed the black family. African-Americans struggled against terrible odds to unite sundered families, often standing up to authority in the process.

In June 1866, George W. Blount wrote a letter to the Freedmen’s Bureau on behalf of Josiah D. Jenkins of Edgecombe County. Just months after being forced to free them, Jenkins had indentured eight siblings whose mother had died. Within six months, the children’s family had come for them, and the five oldest had left for more agreeable situations. Sallie, 14, Sookie, 12, and Isabella, 10, were in Wilson County with their elder sister and her husband Willie Bullock. Arden, 16, was working for what appears to be a commercial partnership in Tarboro, and Bethania, 14, was with her and Arden’s father Jonas Jenkins (paternity that Blount pooh-poohed.) Jonas Jenkins had sought custody of his children before their indenture, but his claims had been trumped by a “suitable” white man who “ought” to have them because he had “raised them from infancy” [i.e., held them in slavery since birth] and their mother “died in his own house.” 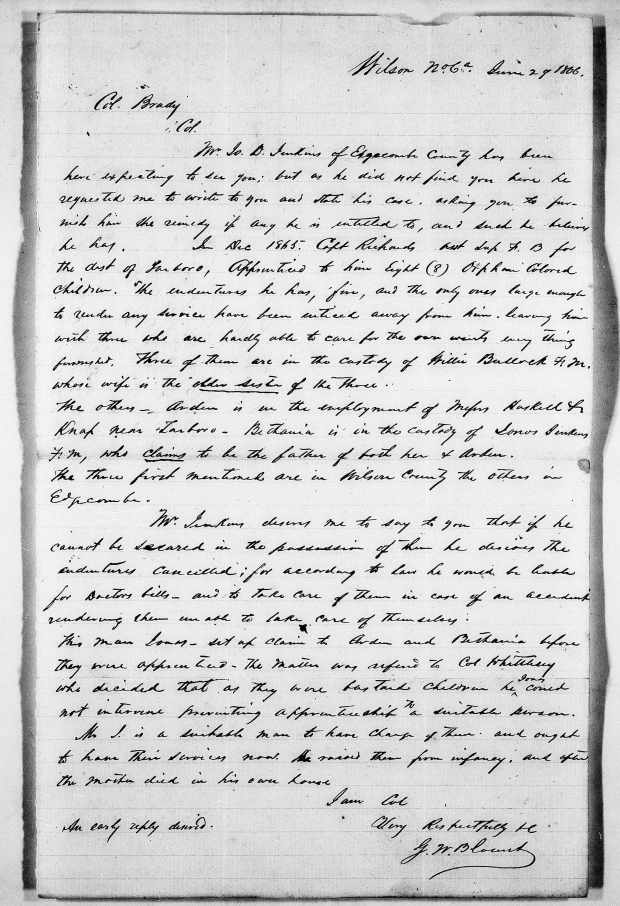 Mr. Jo. D. Jenkins of Edgecombe County has been here expecting to see you; but as he did not find you here he requested me to write to you and state his case, asking you to furnish him the remedy if any he is entitled to, and such he believes he has. In Dec 1865, Capt Richards Asst Sup F.B. for the dist of Tarboro, Apprenticed to him Eight (8) Orphan Colored children. The indentures he has, five, and the only ones large enough to render any service have been enticed away from him, leaving him with three who are hardly able to care for the own wants every thing furnished. Three of them are in the custody of Willie Bullock F.M. [freedman] whose wife is the older sister of the three. The others – Arden is in the employment of Messrs. Haskell & Knap near Tarboro. Bethania is in the custody of Jonas Jenkins F.M., who claims to be the father of both of her & Arden. The three first mentioned are in Wilson County the others in Edgecombe.

Mr. Jenkins desires me to say to you that if he cannot be secured in the possession of them he desires the indentures cancelled; for according to law he would be liable for Doctors bills – and to take care of them in case of an accident rendering them unable to take care of themselves.

This man Jonas set up claim to Arden and Bethania before they were apprenticed. The matter was referred to Col Whittlesey who decided that as they were bastard children he Jonas could not intervene preventing apprenticeship to a suitable person.

Mr. J is a suitable man to have charge of them and ought to have their services now. He raised them from infancy, and after the mother died in his own house 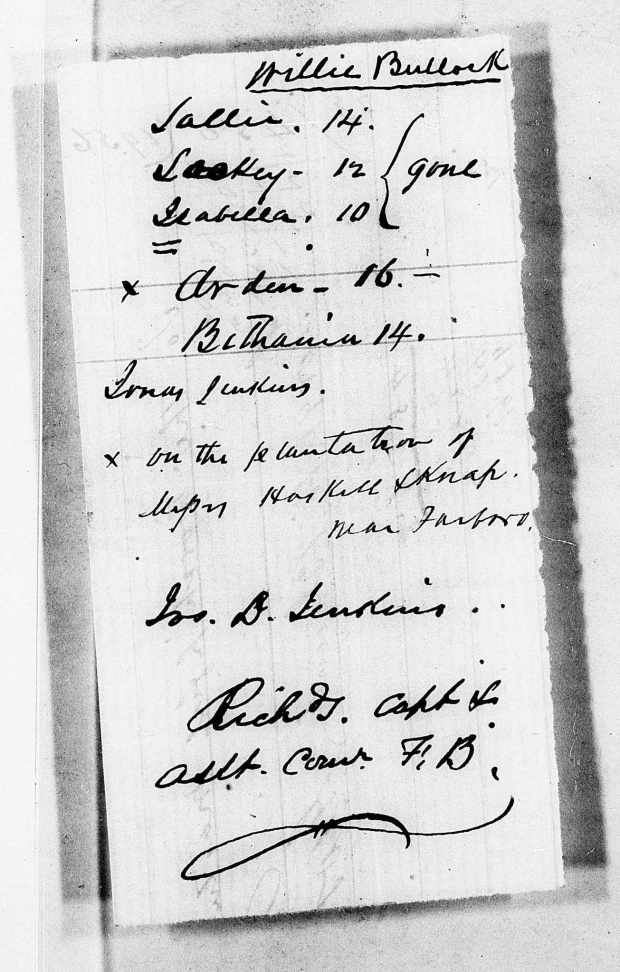 A note from the file listing the Jenkins children to which Josiah D. Jenkins laid claim. 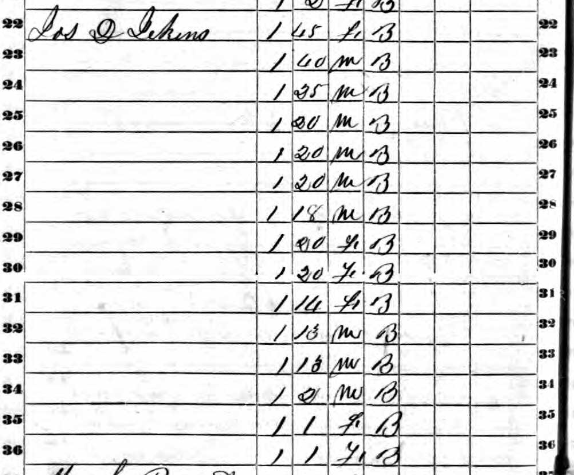 Entry for Josiah D. Jenkins in the 1850 slave schedule of Edgecombe County. By 1860, Jenkins claimed ownership of 36 people, evenly divided between men and women.