Sidney Wheeler was a man, not a boy, and married nine months after this mishap. On 23 December 1896, Sidney Wheeler, 24, married Lou Armstrong, 20, in Wilson. W.T.H. Woodard performed the ceremony in the presence of Richard Renfrow, S.A. Smith and Janie Booth.

In March 1910, Sidney Wheeler Jr. accidentally shot his sister in the head while playing with a gun. She died instantly. Their mother was away from home cooking supper for Frederick Woodard’s family; their father presumably was also at work. The Wheeler girl’s name is unknown. The 1900 census lists only one child; the 1910, only one daughter, Emma, who lived to adulthood. Though described as eight years old, Sidney Jr. was more likely about ten. 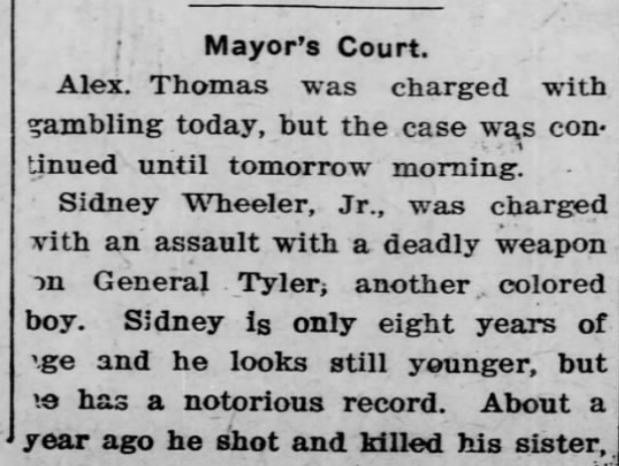 The Daily Times published two articles about the incident. The second doubled down on the sensationalist editorializing, but there seems little question that Sidney Jr. engaged in unusually violent behavior.

Six months later, a Raleigh paper picked up a local-interest bit from Wilson and printed it using the exaggerated dialect and descriptions saved for negro anecdotes. In a nutshell: Anderson Dew visited Sidney Wheeler”s barber shop. With half his face shaved, Dew attempted to spit. Wheeler warned there was no spitting while he was shaving. Further, there was the matter of Dew having  testified against Wheeler on a liquor charge. Dew distracted Wheeler’s attention, then jumped from the chair and ran off to tell this tale.

Sidney Wheeler died 8 March 1912 in Wilson. Per his death certificate, he was 35 years old; was born in Nash County to Richard and Annie Wheeler; worked as a barber; was married; and resided at 710 Vance Street. Lula Wheeler was informant.

Six and-a-half years after their father died, Sidney Wheeler Jr.’s younger brother Dabbie fetched up in court on a breaking and entering charge. As he had already done time on a county road gang, the judge sentenced him to five-to-ten in the state penitentiary. 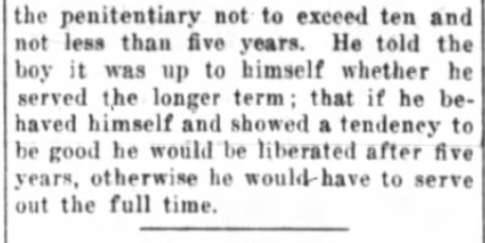 Dabbie Wheeler died four years into his prison term of tuberculosis of the shoulder joint and bowels. He was 17.

Dabbie Wheeler died 21 June 1922 at the State Penitentiary in Raleigh, North Carolina. Per his death certificate, he was born 27 August 1904 in Wilson to Sidney Wheeler and Lula Armstrong and worked as a laborer. He was buried in Chapel Hill.

Ten months later, Sidney Wheeler Jr. escaped from a prison camp near the Rocky Face Mountain quarry in Alexander County, North Carolina. I have found nothing further about him.

Lulu Wheeler died 5 May 1925 in Wilson. Per her death certificate, she was born 11 August 1878 in Elm City to Emma Armstrong; she was the widow of Sid Wheeler; she resided at 523 Church Street; and she did housework for Atlantic Christian College. Emma Wheeler was informant.