The eighty-third in a series of posts highlighting buildings in East Wilson Historic District, a national historic district located in Wilson, North Carolina. As originally approved, the district encompasses 858 contributing buildings and two contributing structures in a historically African-American section of Wilson. (A significant number have since been lost.) The district was developed between about 1890 to 1940 and includes notable examples of Queen Anne, Bungalow/American Craftsman, and Shotgun-style architecture. It was listed on the National Register of Historic Places in 1988. 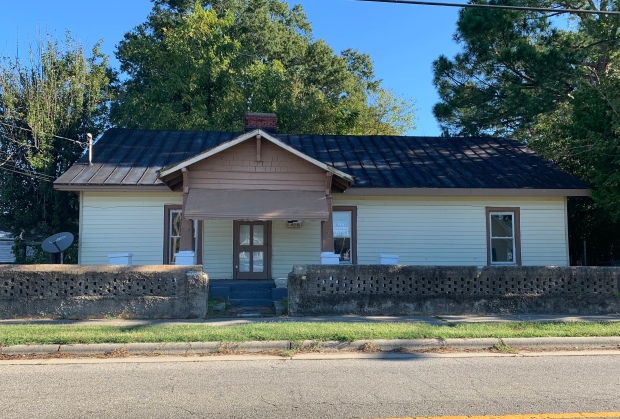 As described in the nomination form for the East Wilson Historic District, this house is: “circa 1930; 1 story; Rufus Hilliard house; bungalow with gable roof and small gabled entry porch; form appears to have been extended to accommodate tenants; Hilliard operated store at #901 [The People’s Palace] and speculated in local real estate.”

In 1940, John Smith Hammett registered for the World War II draft in Wilson. Per his registration card, he was born 19 February 1912 in Clarendon, South Carolina; resided at 903 East Nash Street; his contact was Rufus W. Hilliard, uncle, 903 East Nash; and he worked for the Town of Wilson.

Rufus Wimberly Hilliard died 5 December 1976 in Wilson. Per his death certificate, he was born 16 July 1896 to Albert H. Hilliard and Penina Wimberly; was married to Lela Washington Hilliard; lived at 903 East Nash; and was a retired fireman with the Wilson Power Plant.