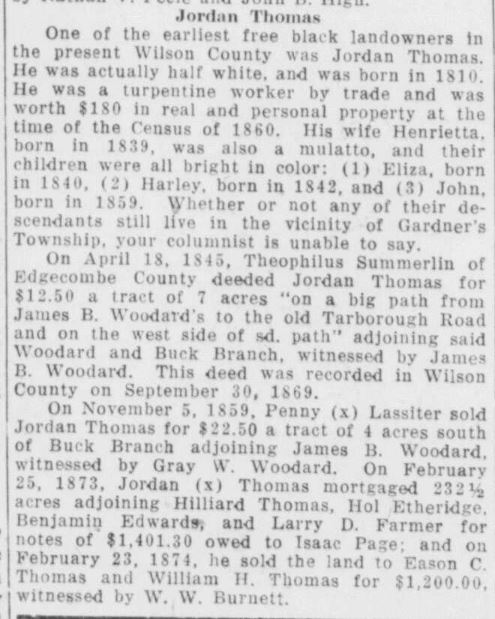 This piece on Jordan Thomas is not entirely accurate. Franklin County native Jordan Thomas’ first wife was Charity Locus, a free woman of color. His second, Eliza, also seems to have been free. His third was Rosa Woodard, the enslaved daughter of London Woodard, who bore him a son, Peter.

In the 1810 census of Franklin County, North Carolina, were free colored heads of household Lettice Thomas and Eliza Thomas. One, perhaps Eliza, may have been Jordan Thomas’s mother.

In the 1840 census of District 17, Edgecombe County: Jerdan Thomas headed a household that comprised one male aged 24-35 and two females under 10. Nearby, Hearty Thomas, head of a household that included one male under 10; three females aged 10-24; one female 24-26; and one female 36-45. [Who was Hearty Thomas? Jordan Thomas named a daughter Harty.]

In the 1850 census of Gardners township, Wilson County: in the household of white farmer J.B. Woodard, farmer Jordon Thomas, 35, “free.” [Where were his wife and children?]

On 5 July 1899, Jordan Thomas made his mark on his last will and testament. Under its terms, “beloved daughters” Harty and Henretta Thomas received a life interest in the 11 acres upon which he lived in Gardners township adjoining the lands of Benjamin Finch, Benjamin Artis and T.W Barnes. After their deaths, the property was to go to grandchildren Jordan Thomas, Alfred Thomas and Charity Hagans. The will entered probate on 21 March 1901 in Wilson, presumably shortly after Thomas’ death.

Adline Thomas died 20 May 1926 in Gardners township, Wilson County. Per her death certificate, she was 91 years old; unmarried; was born in Edgecombe County to Jerdon Thomas of Franklin County and Chattie Thomas; and was buried in Rountree cemetery. Informant was Anderson Thomas. [“Adeline” was Harty Thomas.]

Peter Thomas died 7 July 1929 in Wilson township. Per his death certificate, he was 78 years old; married to Maggie Thomas; was a farmer; was born in Wilson County to Jordan Thomas and Rosa Thomas; and was buried in Penders family cemetery, Wilson County. Sudie Barnes was informant.

On 19 December 1932, Jordon Thomas died in Toisnot township, Wilson County. Per his death certificate, he was about 70 years old; was born in Wilson County to Henrietta Thomas; and was a farmer. Informant was J.T. Barnes.