In the Name of God, Amen. I, Isaac Rich, of Lucama, Wilson County, State of North Carolina, being of sound mind and memory do this 22nd day of March, A.D. 1911, make and publish my last and testament in manner following, that is to say: At my death I wish to be decently buried and according to the wishes of my friends.

ITEM. I give to my beloved wife, Jack Ann Rich, during her life time or widowhood, the home place where on I now live containing thirty (30) acres, more or less, which is separated and marked by a line from the railroad bridge to the old line the corner, and after her death I give my granddaughter Viola Dawson the said home place during her life time

ITEM. I give my daughter, Martha Ann, wife of James Pearce, one tract of land separated from the home place by a line from the railroad bridge above mentioned, to the old line including the church lot adjoining Mr. Jesse Lucas line and also three and one fourth acres across the railroad, all together containing thirty (30) acres, more or less, to her and her heirs forever.

ITEM. I give and bequeath to my beloved daughter, Marilda Forsythe, one tract of land called the grave yard tract, adjoining Jesse Lucas’s line at spring branch, a corner, thence to the railroad corner above, to include two acres across the rail road, the whole together containing twenty one (21) acres, more or less, to have and to hold to her the said Marilda Forsythe, during her life and after her death I bequeath the aforesaid land to Martha Ann Pearce, her heirs and assigns.

ITEM. I give and bequeath to my grand daughter, Viola Dawson, after the death of my wife, the home place mentioned in my will, to her and her heirs.

ITEM. I give and bequeath unto my beloved wife one horse and buggy her choice at my death. Also her share according to law of the cattle and other stock, and also her share of all other perishable property at my death and the sale of my property.

ITEM. At my death I give to Roman Oneal, my foster son, who has been faithful to me, a horse worth not more than twenty dollars and one Bible to cost one dollar

And if any money remain after the settlement of my estate, I bequeath the same to my children and their decendants

In testimony whereof, I hereunto set my hand an seal the day and date above mentioned in the presence of T.C. Davis and F.S. Davis the subscribing witnesses to this my will.                 /s/ Isaac (X) Rich

On 12 December 1900, Isaac Rich, 50, of Wilson County, married Jack Ann Ricks, 35, of Wilson County. Methodist minister G.A. Wood performed the ceremony at the bride’s residence in Wilson in the presence of Moses Depree and Mingo Hines.

Willie Dawson, 23, of Black Creek township, son of Benjamin and Caroline Dawson, married Susie Ann Richs, 22, of Cross Roads, daughter of Isaac and Eliza Richs, on 12 January 1905. Free Will Baptist minister W.H. Frost performed the ceremony at W.M. Forsythe’s in the presence of Forsythe, William Daniels and Aaron Barnes, all of Lucama.

James Pierce, 28, of Cross Roads, married Martha Rich, 24, of Cross Roads, daughter of Isaac and Eliza Rich, on 18 January 1906 at Martha’s residence. Free Will Baptist minister J.M. Richardson performed the ceremony in the presence of Thomas Ayers, William Forsythe and J.T. Horton, all of Lucama. 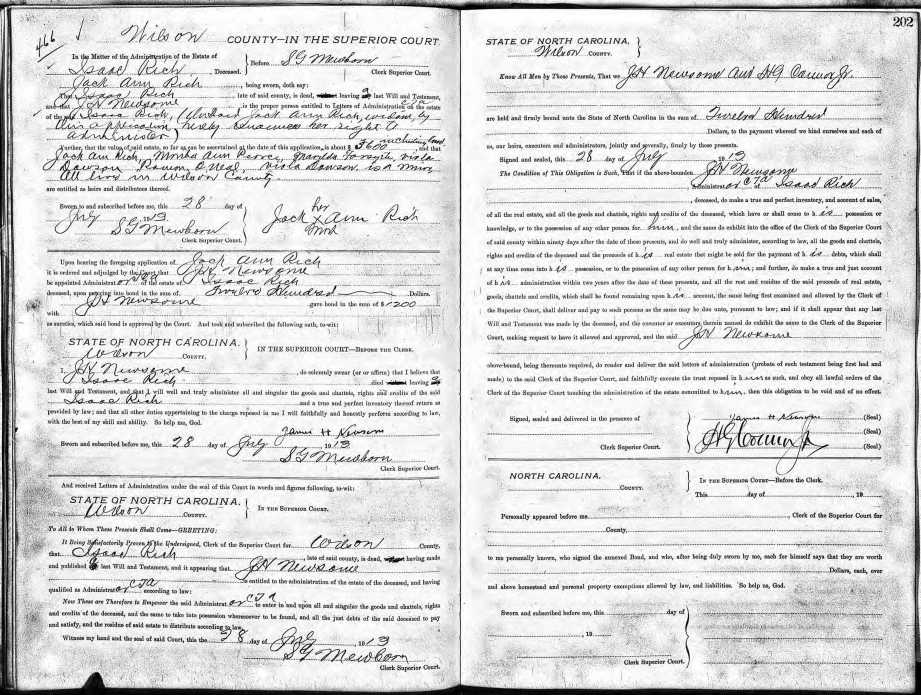 Martha A. Pierce died 23 February 1918 in Cross Roads township. Per her death certificate, she was 42 years old; the daughter of Isaac Rich and Eliza Hayes; was married; and was buried in the Ricks graveyard. William Forsythe was informant, and Mack Forsythe, the undertaker.