“The first cafe owned by a black in Stantonsburg was opened in 1947 and was owned by June Scott Artis and his wife, Ethel. They were assisted in the business by their son Edgar Artis. The white frame building was located at the corner of Macon and Greenwood Avenues. The inside was highlighted by the pot belly stove that was located in the middle of the floor. Soft drinks, hot dogs (5¢), peanuts and other snacks were sold. 1965 marked the closing of the business.

“In 1940 Toney Woodard opened the first black-owned grocery store in Stantonsburg. The business operated until Mr. Woodard’s death in 1959.

“Oscar Ellis, Jr., opened a combination barber shop, pool room and cafe on Greenwood Avenue in 1960. The business is still in partial operation with the cafe being operated by Annie Mae Barnes and the barber shop operated by Ran Thompson.

“The first black-ownwed and operated business in Stantonsburg was probably the blacksmith shop that was owned by John Whitley. The business was opened in 1918 and operated until 1950. It was located in the building owned by William and Walter Artis, which was situated on the south side of Yelverton Street about twenty yards from the railroad track.” 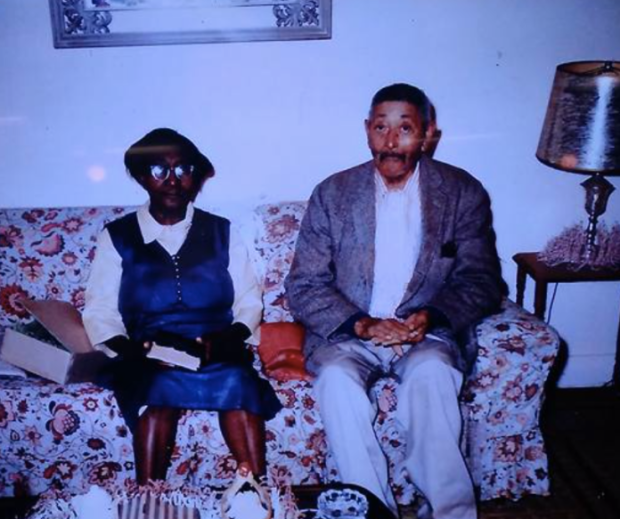 In the 1910 census of Stantonsburg township, Wilson County: Columbus Artis, 24, grocery storekeeper, with brothers June Scott, 20, and Henry J., 16, box factory laborers,plus two lodgers, John Newsome, 30, and Eliza Diggs, 24 (who were relatives of their brother William’s wife Etta Diggs Artis.) [Clearly, there was an African-American grocer in Stantonsburg well before 1940.]

June Scott registered for the World War I draft in Wayne County. He reported that he had been born 23 November 1889 near Eureka, Wayne County and resided on RFD 1, Fremont.  He farmed for himself near Eureka and was described as being tall and slender with dark brown eyes and black hair.  He signed his name “June Cott Artis” on 5 June 1917.

June Scott Artis died 2 June 1973 in Stantonsburg of chronic myocarditis, secondary to chronic nephritis.  His death certificate reports that he was married to Ethel Becton and was born 23 November 1895 to Adam Artis and Mandy Aldridge.  He was buried 7 June 1973 at Artis Cemetery in Wayne County.

On 12 September 1918, Toney Woodard registered for the World War I draft. Per his registration card, he was born 1 February 1874; resided on R.F.D. 1, Stantonsburg, Greene County; works a tenant farmer; and his nearest relative was Eliza Woodard.

Tony Woodard died 17 May 1959 in Stantonsburg, Wilson County. Per his death certificate, he was born 7 February 1879 in Wilson County to Isaac and Arner Woodard; worked as a merchant; and was married to Nettie Woodard. Mr. Heattie Woodard was informant.

Per A History of Stantonsburg, Oscar M. Ellis Jr. was born on the J.L. Yelverton farm on 2 May 1913. A truck driver and farmer, Ellis was active in Bethel A.M.E. Zion, the Masonic Lodge, the Elk’s Club, Future Farmers of America, 4-H, the local school board, the county Farm Bureau, and the Agricultural Conservation and Stabilization Service. He worked to “upgrade the black section of town” and as a volunteer with the Stantonsburg Fire Department.

In the 1940 census of Stantonsburg, Wilson County: on Railroad Street, laborer Oscar Ellis, 26, and wife Lucille, 25.

[William and Walter Artis, who owned the building in which John Whitley operated a smithy, were brothers of June Scott Artis and Columbus E. Artis. They lived a few miles west of Stantonsburg, across the county line near Eureka, Wayne County.]

Stantonsburg’s black community is centered on a few blocks on the eastern side of the railroad tracks bisecting the town.

Photo of the Artises courtesy of Adam S. Artis.