The nineteenth in a series of posts highlighting buildings in East Wilson Historic District, a national historic district located in Wilson, North Carolina. As originally approved, the district encompasses 858 contributing buildings and two contributing structures in a historically African-American section of Wilson. (A significant number have since been lost.) The district was developed between about 1890 to 1940 and includes notable examples of Queen Anne, Bungalow/American Craftsman, and Shotgun-style architecture. It was listed on the National Register of Historic Places in 1988.

As described in the nomination form for the East Wilson Historic District, this house is: “ca. 1913; 1 story; extensively remodeled two-room house with stuccoed facade and added wings.” Because of its extensive remodeling, the house was considered “non-contributing” to the historic character of the district.

The photograph below accompanies a fine article published in the January 2011 volume of North Carolina Historical Review, Richard L. Mattson’s “The Cultural Landscape of a Southern Black Community: East Wilson, North Carolina, 1890-1930.” The image dates from about 1910, and 706 East Green — though now heavily modified — is easily recognized in the twin gables fronting the house. The family depicted is that of John W. and Edmonia Barnes Farmer, whose grandson James E. Farmer provided the photograph. 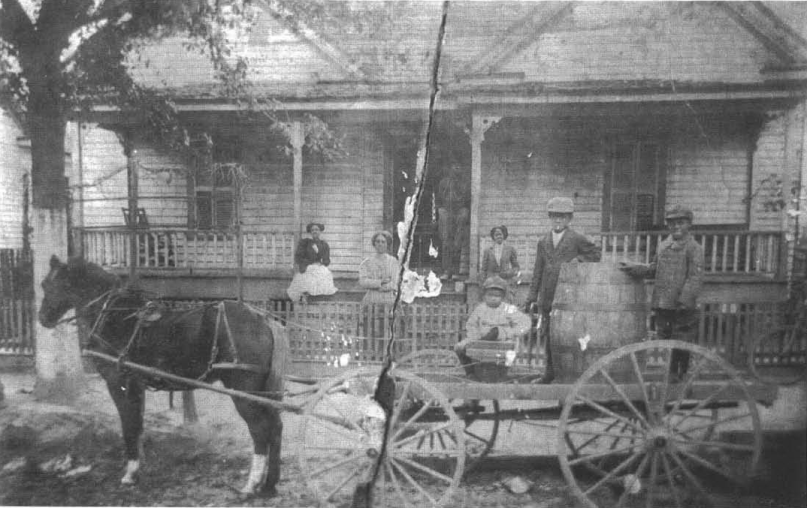 Edmonia Farmer died 18 January 1947 at home. Per her death certificate, she was 77 years old, married to John Wash Farmer, and born in Wilson County to George Barnes of Wilson County and Annie Parker of Edgecombe County. George W. Farmer was informant, and Dr. William Hines certified the death.

John Wash Farmer died 20 January 1947 at home. Per his death certificate, he was 79 years old; was born in Wilson County to Wash Farmer of Wilson County and an unknown mother; and worked as an expressman. The informant was George W. Farmer, 1207 Carolina Street, Wilson.