The eighth in a series of posts highlighting buildings in East Wilson Historic District, a national historic district located in Wilson, North Carolina. As originally approved, the district encompasses 858 contributing buildings and two contributing structures in a historically African-American section of Wilson. (A significant number have since been lost.) The district was developed between about 1890 to 1940 and includes notable examples of Queen Anne, Bungalow/American Craftsman, and Shotgun-style architecture. It was listed on the National Register of Historic Places in 1988. 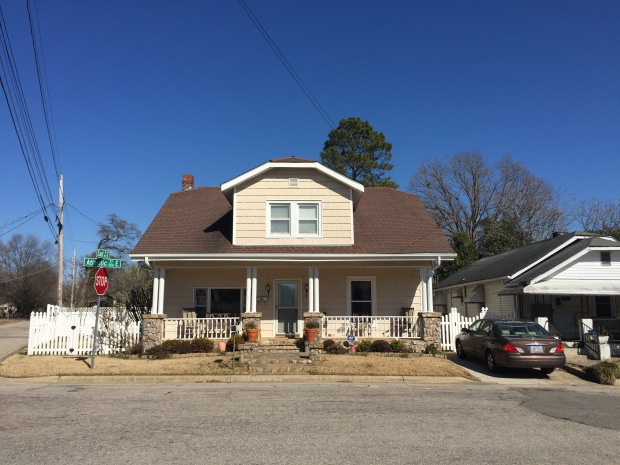 On 5 June 1917, Judge Hall of Vick Street, Wilson, registered for the World War I draft. Per his registration card, he was born 29 May 1888 in Wayne County; worked as a carpenter for Cleveland, Glover in Wilson; was single; and was thin and of medium height with brown eyes and black hair.

On 10 July 1917, Judge H. Hall, 30, of Wilson, son of Edwin and Avie Ann Hall, married Bettie B. Taylor, 34, of Wilson, daughter of Henry and Mary Battle of Nash County in Wilson. A.L.E. Weeks, a Missionary Baptist minister, performed the ceremony in the presence of C.L. Darden, W.H. Burton, and Lee A. Moore.

Bettie Hall died 15 September 1939 in Wilson. Per her death certificate, she resided at 901 Atlantic Street; was married to Judge Hall; was 50 years old; worked as a tobacco factory packer; and was born in Wilson County to Henry Battle and Margarett Lucas. Ellen Battle was the informant.

Judge Hall died 9 March 1954 in Wilson. Per his death certificate, he resided at 901 Atlantic Street; was married; worked as a carpenter; was born 28 May 1886 in Wayne County to Edward and Arie Hall; and was buried at Turner Swamp cemetery, Wayne County. Bertha Hall was informant.