Rev. Spurgeon David Davis, appointed in 1918 to head one of two planned alternative schools in the wake of the Charles Coon incident, was a newcomer to Wilson. A native of Maryland, he arrived in town in 1917 to head First Baptist Church (now known as Jackson Chapel First Missionary Baptist Church.) So who was he?

Spurgeon Davis apparently was ordained as an A.M.E. minister prior to 1910. He headed west to a post in Kansas City, Missouri:

But did not stay long:

Davis fetched up in Rome, Georgia, but his stay there was even shorter and considerably less welcome: 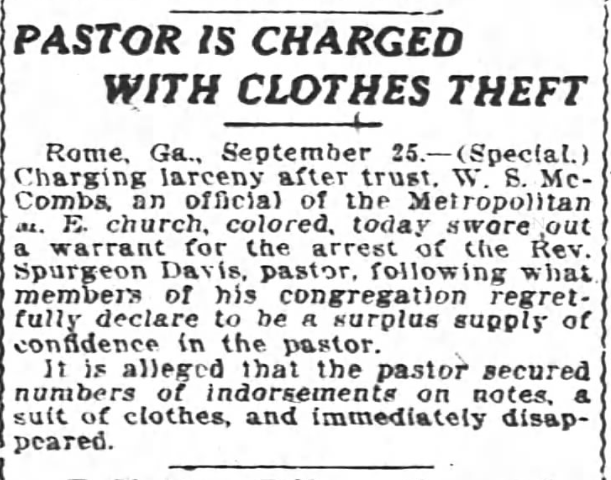 This escapade called for some reinvention. Davis cut his ties with the A.M.E.’s and reemerged as a Baptist preacher …

… and headed back South.

On 5 June 1917, Davis registered for the World War I draft in Wilson, and listed his address as 648 West Mulberry Street, Baltimore; his date of birth as 26 July 1887; and his occupation as minister employed by “So. Baptist Convention; white; travelling in South.” He also noted that he was married with two children. Wilson County’s Clerk of Superior Court transmitted the registration to Baltimore.

Shady past notwithstanding, Davis — by now, somehow, a Doctor of Divinity — was a sought-after speaker in North Carolina, as these glowing briefs demonstrate: 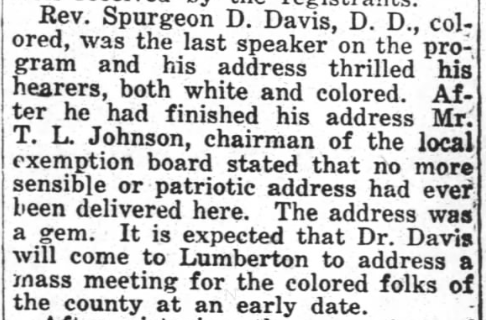 On 23 April 1919, Davis married Nancy Jones, 27, of Wilson. Though the two obtained their marriage license in Wilson County, the ceremony, oddly, was conducted one county over by Baptist minister J.S. Brown in Rocky Mount. Wilson leading lights F.S. Hargrave and C.L. Darden were two of the official witnesses.

However, this “prince among preachers” was soon on the lam again, having hastily resigned his post in October 1919 as a bigamy scandal erupted. 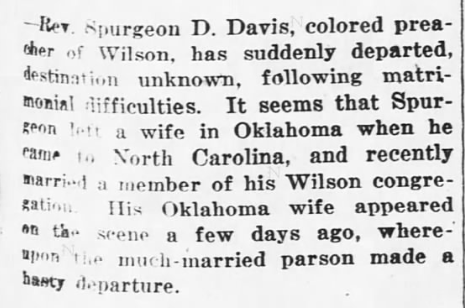 Davis apparently never returned to Wilson — at least, in any long-term capacity. It is not clear who the Oklahoma wife was. Davis obtained a license to marry Ruth Olivia Jones in Lynchburg, Virginia, on 26 May 1911. The couple, however, are also listed in a District of Columbia Compiled Marriage Index with an 29 April 1912 marriage date. 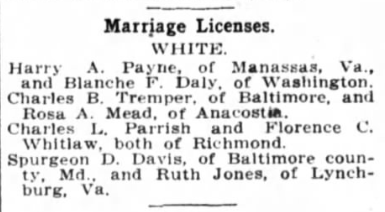 Rev. Spurgeon Davis of 139 Pender Street appears in the 1920 Wilson city directory — a volume compiled no doubt before he left town — with no spouse noted. He is not found in the 1920 federal census. However, it seems that Nancy prevailed in the skirmish, for, in the 1923 Montgomery, Alabama, city directory: Davis Spurgeon D Rev (c[olored]; Nancy E) pastor First Baptist Church h[ome] 714 High. And in the 1930 census of Montgomery, Alabama: at 714 South Ripley (an $8000 home he owned), Maryland-born Spurgeon Davis, clergyman; North Carolina-born wife Nancy, 38; and Maryland-born daughter Mary A., 10. Tragedy befell during the Depression decade, however, and in the 1940 census of Baltimore, Maryland: at 111 Railroad Street, public school principal Carrington Davis, 52; brother-in-law Douglas Smith, 45, a baseball team manager; sister Alice Smith, 45, a laundress; brother Spurgeon Davis, 49, a house man working for a private family; and nephew Jarrett Davis, 34, a gardener. (Davis was described as married, though no wife was listed in the household. In a rented house across the street at 112 Railroad, however, was North Carolina-born Nancy Davis, 44, described as divorced.) In 1942, Davis registered for the World War II draft. Per his registration card: he resided in Chattolanee, Baltimore, Maryland; he was born 28 July 1887 in Chattolanee; his contact person was Mrs. Alice Smith of Owings, Maryland; and his employer was Mrs. Horace White of Garrison, Maryland. I have not found record of his death.

From a history of Jackson Chapel First Missionary Baptist Church, a photograph of Rev. Davis. From the text: “The Reverend A.L. Weeks and the Reverend Spurgeon Davis were those to follow the Reverend [M.A.] Talley. In 1919, the mortgage on the new edifice was burned as a result of a great financial effort engineered by Reverend Davis, supported by the officers and members.” There was that, at least.