From North Carolina Architects and Builders: A Biographical Directory:

“Oliver Nestus Freeman (February 22, 1882-September 28, 1955) was a prolific, creative, and multi-talented craftsman active in Wilson from about 1910 to his death in 1955. He became the community’s preeminent brick and stonemason and also worked in tile, but he is best known for his stonework on his own buildings and throughout the community.

“Born in rural Wilson County, the son of Julius Freeman, a carpenter, and Eliza Daniels Freeman, Freeman was educated at the Tuskegee Normal School where he majored in industrial arts. Training and experience in construction, including masonry work, constituted an important part of the Tuskegee program. As a young man, Freeman taught at Tuskegee and later at the Wilbanks School in Wilson County. He married Willie May Hendley, originally of Nashville, Tennessee, whom he met at Tuskegee. The Freemans became friends with both Booker T. Washington and George Washington Carver through the Tuskegee connection. The couple settled in Wilson about 1910, and there Freeman constructed a modest brick house at 1300 East Nash Street, where they raised four children, and which has remained in the family.

“Freeman identified himself to the census takers of 1910 and 1920 as a brickmason, but he was skilled at all types of masonry work. Especially distinctive is his bold, rough stonework for foundations, chimneys, columns, and other architectural elements throughout Wilson, especially for the city’s many fine bungalows. Besides his work on buildings, he created imaginative masonry sculptures that enhance many Wilson gardens.

“Freeman’s best known works are those he built for himself. After constructing a brick cottage for himself and his wife in about 1910, in the 1920s he transformed the Oliver Nestus Freeman House into a stone bungalow. Over the years he added stone and concrete garden sculptures to his property, including a 7-foot dinosaur. In addition, he constructed nearby a rental dwelling, to help with the local housing shortage. Known as the Freeman Round House (1940s), the locally unique house of rough stone features a circular plan divided into wedge-shaped rooms. Long a landmark of the community, in recent years the round house has been preserved and opened as a local museum.” 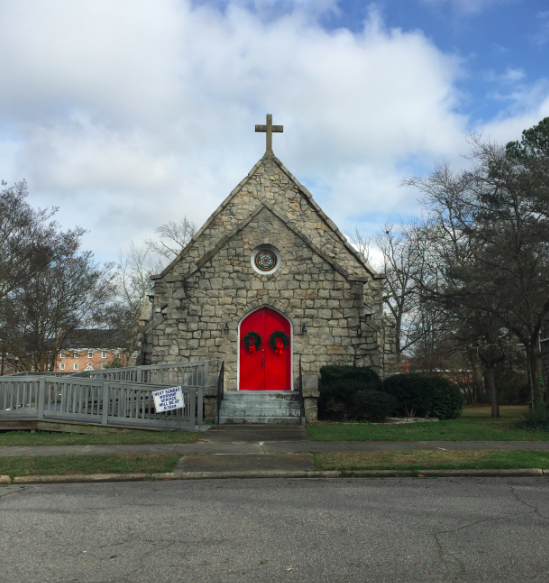 Photo of Freeman courtesy of www.digitalnc.org; photo of church taken by Lisa Y. Henderson in May 2016.