Jeff Barefoot had read my blog and was passing through Wilson. Curious about Rountree, Odd Fellows and Vick cemeteries, he stopped by, poked around in the woods a bit, and hit the jackpot — the headstone of Willie Gay! Not only had I missed Gay’s marker on my forays into Odd Fellows, his is the only one I’ve seen for a Spanish-American War veteran in these cemeteries. 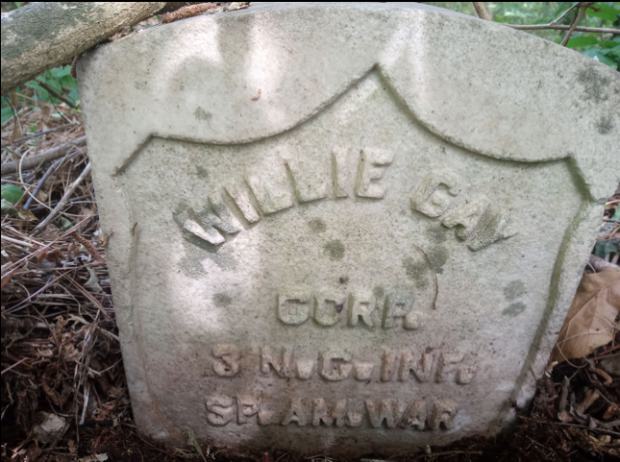 On 8 January 1894, Willie Gay, 18, and Mary Bunn, 21, were married at the groom’s house in Wilson. Presbyterian minister L.J. Melton performed the ceremony in the presence of W.T. Phillips, L.A. Moore, and C.C. Williams.

In the 1940 census of Kecoughtan, Elizabeth City County, Virginia: at the Veterans Administration facility, Willie Gay, 66, born in North Carolina.

Willie Gay died 25 May 1940 at the Veterans Administration hospital in Kecoughtan, Virginia. Per his death certificate, he was born 10 February 1874 in Wilson, N.C., to Charles Gay and Emma Byrum, both of Greene County, N.C.; was divorced; was a veteran of the Spanish American War; was a railroad worker; and lived at 526 Smith Street, Wilson.

On 13 June 1940, Howard M. Fitts applied for a military headstone for Willie Gay. The application for an upright marker noted that Gay had served from 23 June 1898 to 8 February 1899 in Company I, 3rd N.C. Infantry; and achieved the rank of corporal. Gay was to be buried in Rountree (actually, Odd Fellows) Cemetery in Wilson. 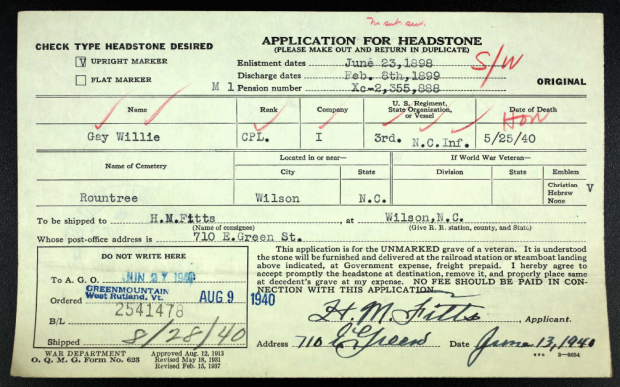 Photo of Gay’s marker courtesy of Jeff Barefoot and published at Findagrave.com. Thank you!