The day after Eugene Fisher drowned while swimming in the lake at Contentnea Park, the Daily Times printed an article suggesting that “Sam Vick,” i.e. Samuel H. Vick Jr., bore some responsibility for the accident.

Vick immediately fired back. His grief, he stated sharply, had “been still more aggravated by the misstatement of facts concerning my part in the matter, for the facts were badly twisted and really just the opposite what really happened.” Georgia Aiken also contributed a corrective, milder in tone, but just as firm.

And where was Contentnea Park? References in contemporaneous news articles reveal that (1) it was not an African-American-only park — the Kiwanis met there regularly — but rather seems to have had a section reserved for black patrons, “the negro park”; (2) it was privately owned and operated; (3) it was located above the dam on Contentnea Creek; and (4) entrance was gained via a road marked by two stone pillars. A dam spans Contentnea Creek just above U.S. Highway 301 to form what is now known as Wiggins Mill Reservoir, still a popular recreational area. With a hat tip to Janelle Booth Clevinger, here is my best guest at the park’s location: 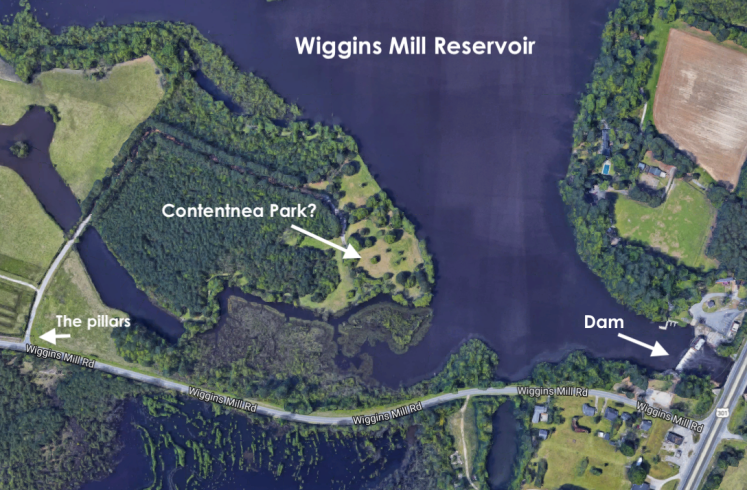 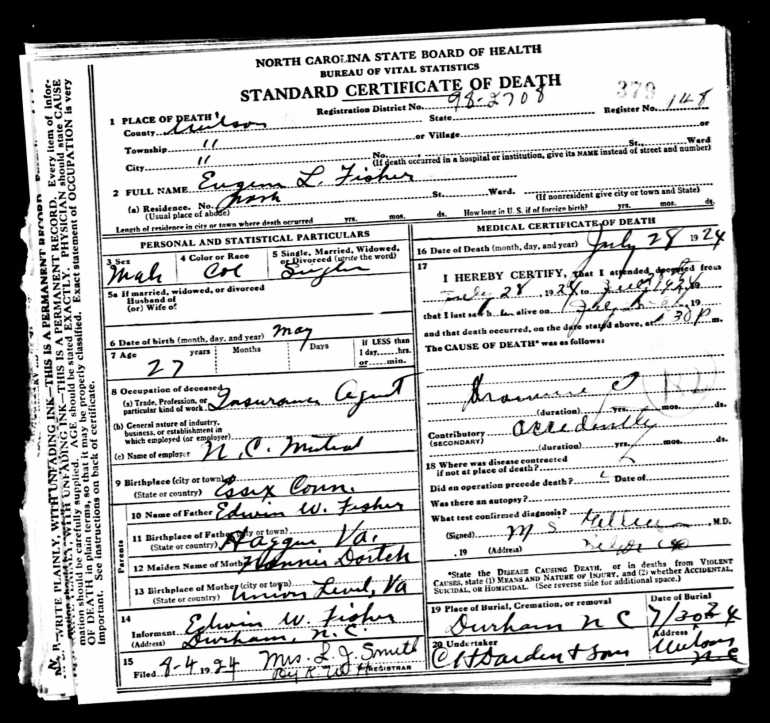 Eugene Fisher’s death certificate reveals that he was an insurance agent for North Carolina Mutual. Fisher was living at an unspecified address on Nash Street. His father Edwin, then a Durham resident, was informant.

Eugene L. Fisher served in the United States Naval Reserve Force during World War I as a mess attendant. The Messman Branch of the Navy, which was restricted to non-white sailors, was responsible for feeding and serving officers. Fisher was assigned to U.S.S. Black Hawk, a destroyer depot ship. After his death, his brother Edwin D. Fisher of 600 East Green Street applied for a military headstone to be shipped to the “Negro Cemetery (Fayetteville Street)” in Durham. [Edwin Fisher, himself a veteran of World War I, signed as “Liaison Officer, [illegible] A.V. of World War, Sumter S.C. chap. #2.” (What does this signify?)]

The “stone” pillars I identified above are actually brick. Until a better guess arrives though, I will stick with hypothesis that they mark the entrance to Contentnea Park. Many thanks to Janelle Booth Clevinger for this photo. — LYH

UPDATE, 11 April 2019: Per additional intel, the pillars shown above were erected in the 1960s. Thus, the location of Contentnea Park remains a mystery.