Though commonly known as Rountree cemetery, this abandoned graveyard originally comprised three burial grounds. One, whose founding date is unknown, was associated with nearby Rountree Missionary Baptist Church. Another belonged to the Odd Fellows fraternal organization, and the last was established on land deeded to the city of Wilson in 1913 by Samuel H. Vick. Into the 1960s, black Wilson’s leading lights and their families were buried in these cemeteries, along with thousands of lesser known residents. A half-century later, only a handful of grave markers remain on a slight rise cleared along the southern ditch bank.

The most prominent of the remaining headstones are those of Della Mercer Hines Barnes and, at left above, her husband Dave Barnes, mother and father/step-father of three of early East Wilson’s most successful sons, William Hines, Walter Hines and Boisey O. Barnes. 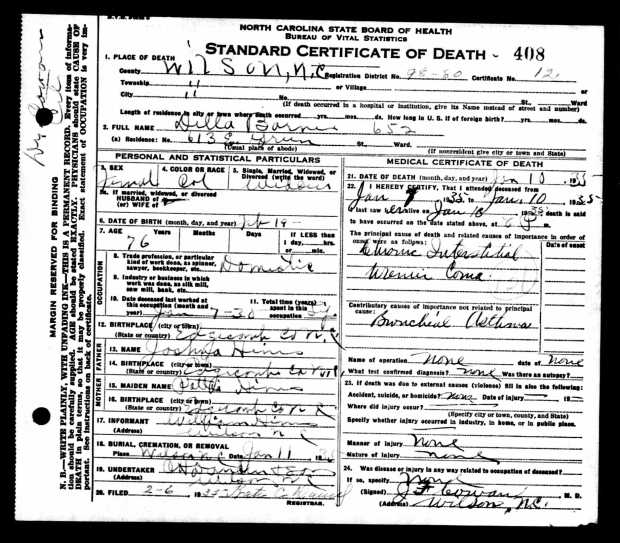 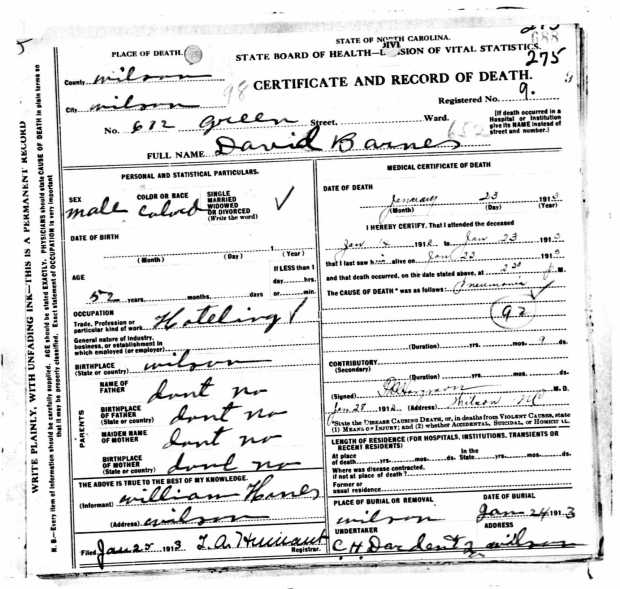 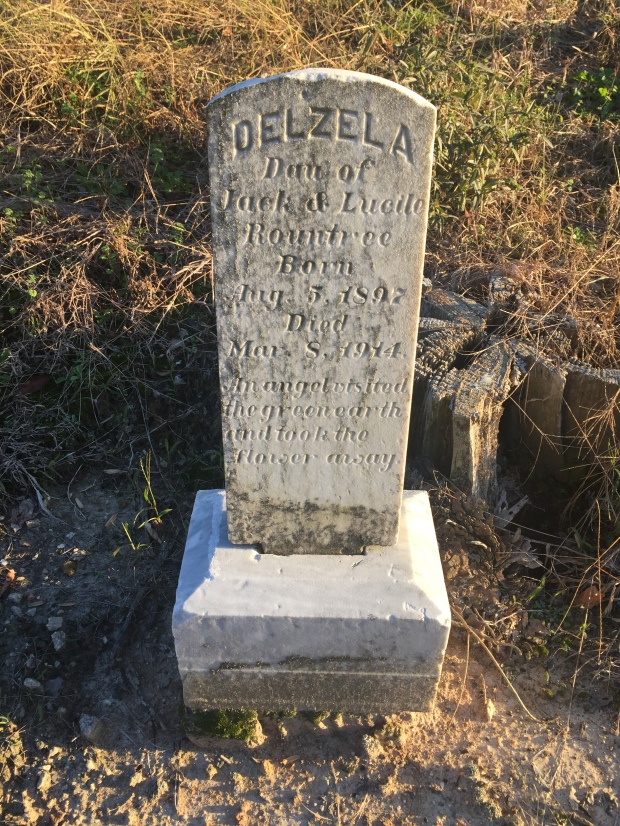 Charles S. Thomas departed this life Sept. 5, 1937 From all life’s labors he rests on high.

Sarah Thomas was not married to barber/insurance agent Charles S. Thomas above. Rather she was married to printing office employee Charles Thomas. 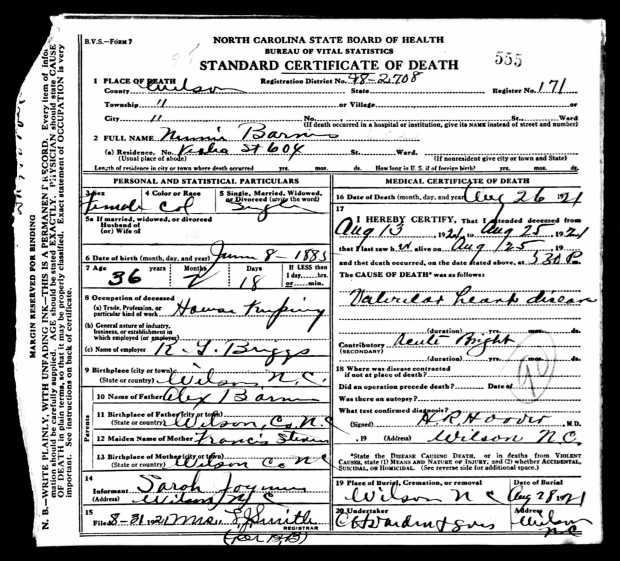 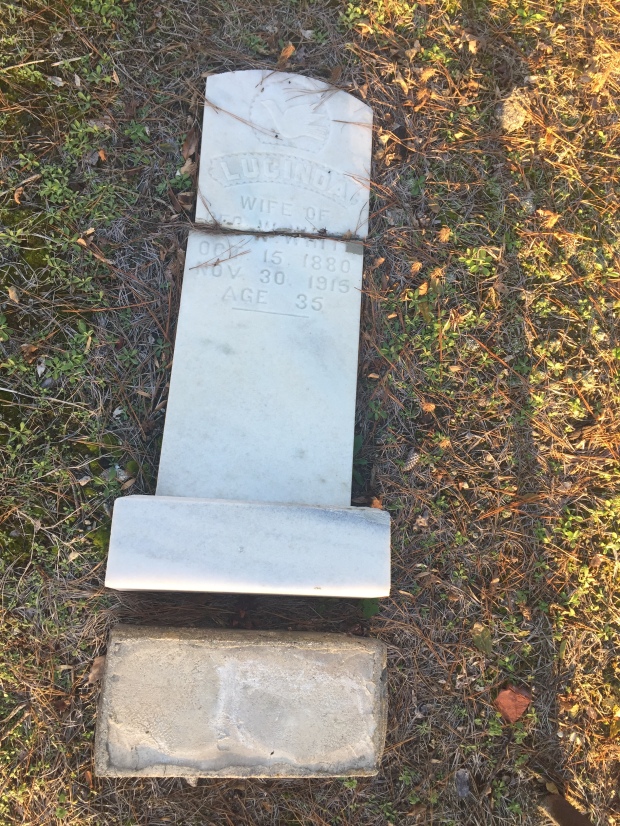 Hardy Tate‘s foot marker lies at some distance from the Tate family plot, but it seems likely that he is buried there.

Henry William Farrior died 6 March 1937 in Wilson. Per his death certificate: he was born 12 August 1859 in Powhatan, Virginia, to Henry and Sylvia Farrior; resided at 203 Pender Street, Wilson; was married Isiebell Farrior; and was a preacher. Dalley Farrior was informant. 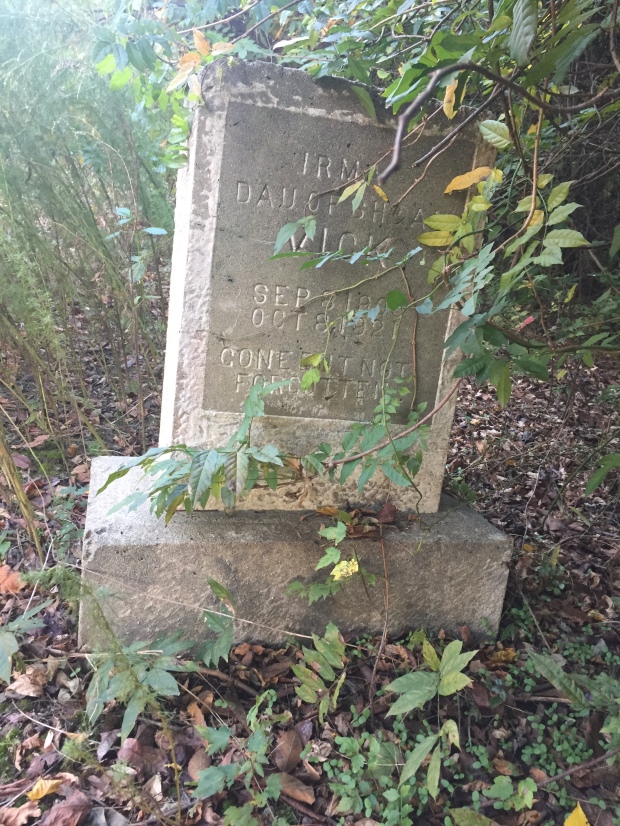 Irma dau of S.H. and A.M. Vick Gone but not forgotten

Irma Vick was a daughter of Samuel H. and Annie M. Washington Vick. She died while a student in Asheville, North Carolina. (It is likely that Irma’s parents and grandparents, and perhaps other siblings, was buried in this cemetery, but none of their headstones remain.)

Clarence Lenwood Carter registered for the World War I draft in 1918. Per his registration card, he was born 29 October 1882; resided at 423 Green Street; worked as a merchant for G.S. Walston, 507 East Nash; and his nearest relative was Mena Carter.

Clarence L. Carter died 13 February 1925 in Wilson. Per his death certificate, he was married to Mina Carter; lived at 418 East Green; was born 29 October 1877 in Bertie County to George Carter and Annie Outlaw; and worked as a day laborer. 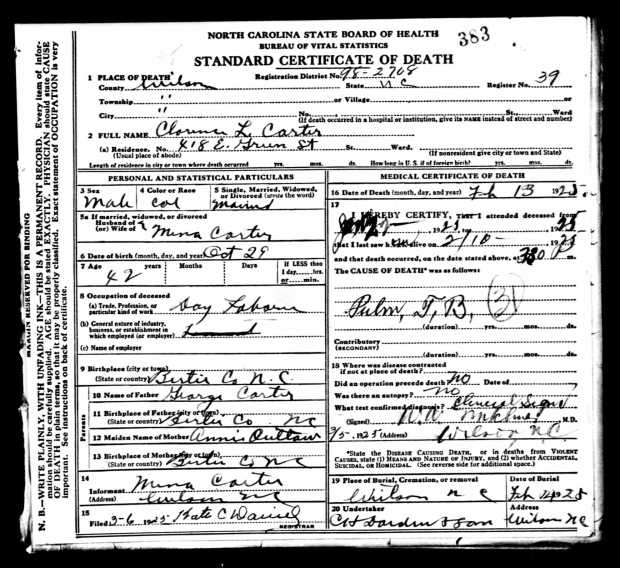 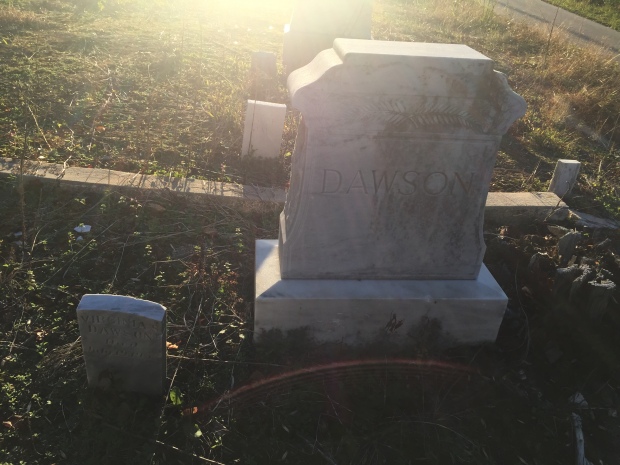 Virginia S. Dawson and her mother L. [Lucy Annie Hill] Dawson are among those buried here. 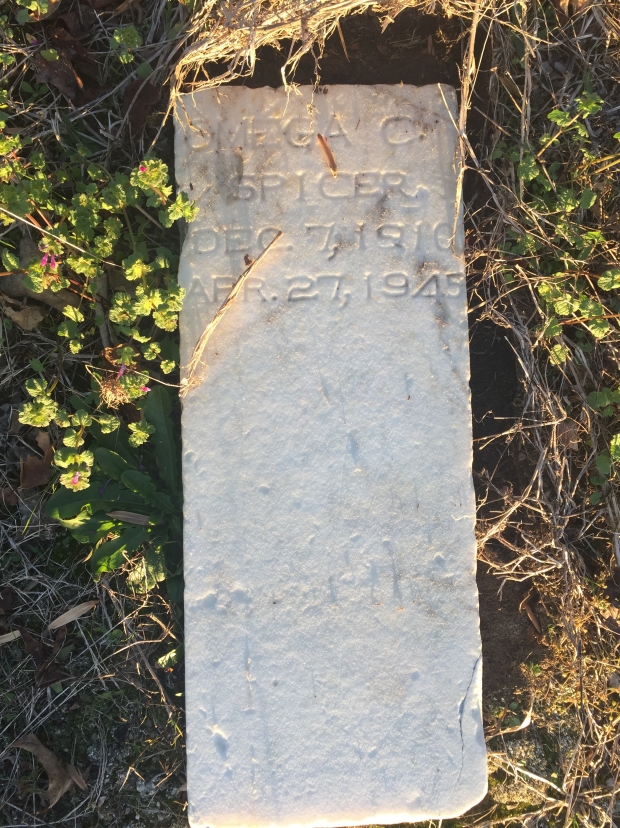 On 7 October 1933, Elverde Taylor, 23, son of Jim and Matilda Taylor, married Omega Carter, 22, daughter of Clarence and Mina Carter. C.A. Artis applied for the license, and a justice of the peace performed the ceremony in the presence of L.M. Mercer of Elm City and L.F. Winborn and W.W. Clark of Wilson.

Edith Omega Spicer died 27 April 1945 at the Eastern North Carolina Sanatorium. Per her death certificate, she was born 7 December 1910 in Wilson County to Clarence Carter of Bertie County and Mena Rountree of Wilson County; worked as a waitress; resided at 538 East Nash Street; and was separated. 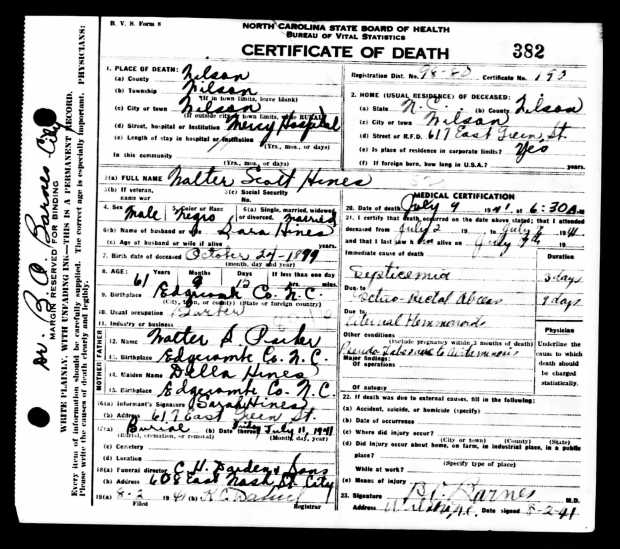 The area outlined in red below, south of Lane Street, is the approximate area of Rountree, Vick and Odd Fellows cemeteries. Its 7.45 acres also extends west the edge of the image. After a stab at clean-up in the early 1980s, the City of Wilson determined that restoring Vick cemetery, which it acknowledged owning, would be too costly. In 1995, after some public input, the City elected to clear and grade much of the site and erect a stone obelisk memorializing Rountree’s dead. Some cracked markers are visible inside the tree line near the cleared area. Otherwise, no trace of the locations of graves remains. Broken stones were to be catalogued and stored, but recent queries into their location have been fruitless.